Lyoto Machida vs Rashad Evans – Battle of the Undefeated

Lyoto Machida vs Rashad Evans – Battle of the Undefeated 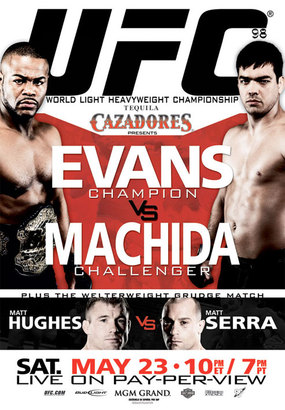 Though many were looking forward to seeing Rashad Evans take on Quinton “Rampage” Jackson, there’s nothing quite like a battle of the undefeated. And that’s exactly what we’re up against this Saturday night at UFC 98. The undefeated light heavyweight champion Rashad Evans (13-0-1) will be taking on Lyoto Machida, also undefeated at (14-0). Evans, who broke into UFC after coming out on top in season two of The Ultimate Fighter, has proven time and time again that he’s more than just your average, All-American wrestler. His knock-out power is a force to be reckoned with, destroying fighters Jason Lambert, Sean Salmon and the recently retired Chuck Liddell. There’s nothing more satisfying than watching that knock-out hit make contact, ripple through the opponent and rob him of consciousness. So, it’s safe to say Lyoto’s got a lot to look out for as he steps into the octagon on Saturday. Lyoto has practiced Karate since the age of three and has held several titles in the art. His last fight, UFC 94, was his first UFC knock-out victory. As impressive as that is, the question remains: Is that enough to take on, and bring down Evans? In the thirteen years since Lyoto started fighting MMA, he’s never held a title. His undefeated 14-0 professional record deserves a lot of respect, but can he hold on to it, and finally win himself a title? We’ll just have to see, but one thing’s for sure…. Someone’s finally got to go home a loser.