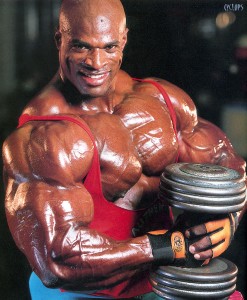 Does Ronnie Coleman take steroids? Well my friend’s cousin, dated a girl, who’s brother worked at Ronnie Coleman’s gym and seen him inject. Just kidding. But the question often comes up on bodybuilding and steroids forums… with plenty of answers following up!

The truth is, no one has proof of the rumored Ronnie Coleman use. No has seen the Ronnie Coleman steroid cycle. On top of that, Ronnie Coleman claims he has passed every single steroid test he was ever given. Of course people regularly asked him if he takes steroids, and automatically assume and accuse him of steroid use. Naturally, being asked over and over, he gets annoyed of it.

From an article on Ronnie Coleman by Nancy Kruh: “Once you’re labeled with something, it’s kind of hard to change that,” he said. “It irritates us all, not just me….I’m not looking for any shortcuts.”

Ronnie Coleman Natural – Is It Possible?

In the same article by Nancy Kruh, Dr. Levine, director of the Institute for Exercise and Environmental Medicine at the University of Texas Southwestern Medical Center at Dallas, said a body like Colemans can be developed with out the use of anabolic steroids.

But let’s get serious here. It’s pretty obvious professional bodybuilders are using anabolic steroids. Several bodybuilders have been caught, and several have admitted not only to using, but the wide use of steroids in the sport of bodybuilding. Ronnie Coleman steroids? Of course, Ronnie has never been caught or admitted it, but other top pros have. In fact, Mr. Olympia winner Jay Cutler admits steroid use, and steroid use in bodybuilding. If a great competitor like Jay Cutler admits to steroid use, is it possible for Ronnie Coleman to have been as successful as he was, without steroids? Watch the deleted scene in from Bigger Stronger Faster, where Jay Cutler admits to steroids.

Ronnie Coleman’s best argument to steroids use? Besides the fact he has never failed a drug test, the man is a freak, with or without steroids. He is perhaps the greatest bodybuilder all time. But when I say freak, I mean FREAK. This man is one of the strongest men you’ll ever see in your life. Many bodybuilders, pro and amateur, are strong, but only a couple are close to Coleman’s level in the strength department. There are videos of him dead-lifting 800lbs, front squat 585lbs, dumbbell bench press 200lbs for 12 reps (per hand)… but the most amazing part of his strength feats, are that he does them only weeks out from competition, which is unbelievable. Anyone that has dieted down for summer or a bodybuilding competition knows how draining it is on the body, and how much your strength suffers. Steroids or 100% natural Ronnie Coleman is a freak of nature, and in terms of size and strength, may not be surpassed any time soon.