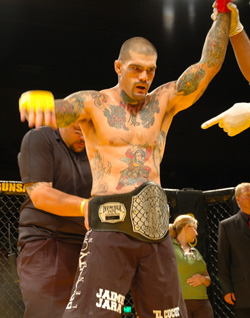 Jaime Jara has proven himself to be one of the best Mixed Martial Artists in the game. He was the first fighter in MMA history to hold four titles in four different weight classes. He held the Gladiator Challenge Heavyweight, Light Heavyweight, Middleweight and Welterweight Titles. Jaime also received Tyson Johnson’s Gladiator Challenge Fighter of the year award in 2005 and had notable wins over former Strikeforce #1 contender Anthony”El Toro” Ruiz and Jerimiah Metcalf.

Jaime will be fighting on September 26th 2008 at Elite XC’s Fight Sho XC Challenger Series 8. The fight will take place at the Chumash Casino in Sant Ynez, CA. Jamie will be going toe to toe with the undefeated (11-0) Givianildo “The Arm Collector” Santana, who is known for his vicious arm bar submissions.

World Extreme Fighter scored an Exclusive Interview with Jaime Jara about his MMA career and his up coming fight. Check it out.

StrLive: When did you begin fighting and what got you into the sport of MMA?

Jaime Jara: “I WRESTLED IN HIGH SCHOOL AND PLACED 2ND IN STATE MY SENIOR YEAR. I STARTING FIGHTING IN 2002. I ALWAYS WANTED TO FIGHT SINCE THE 1ST UFC. I JUST MET THE RIGHT PEOPLE AT THE RIGHT TIME.”

StrLive: Did you street fight much prior to becoming a professional?

StrLive: Who do you consider to be the top 5 Mixed Martial Artists today?

StrLive: If you could fight anyone on the planet, who would you like to fight most?

Jaime Jara: “I’LL FIGHT ANYONE, ANY WHERE, ANYTIME!”

StrLive: Where do you train?

Jaime Jara: “I TRAIN MY JIU JITSU WITH CASSIO WERNECK AND I TRAIN MY WRESTLING AND STAND UP WITH TEAM CARNAGE.”

StrLive: Who are your trainers and what do they train you on?

StrLive: “Are there any specific training partners that have been helping you to take your fight game to the next level?

StrLive: Are there any techniques that you feel were especially helpful to you in reaching your level as a Mixed Martial Artist?

StrLive: What one attribute do you think was most important in achieving your level of success in MMA?

StrLive: Do you have any pre fight rituals or superstitions?

Jaime Jara: “NO NOT REALLY”

StrLive: What injuries have you endured on your journey as a Mixed Martial Artist?

StrLive: What are your thoughts on your opponent, Giva Santana for your up coming fight?

StrLive: Are you focusing your training on any specific part of your MMA game to prepare for your fight with Givanildo Santana?

Jaime Jara: “I’M JUST MAKING SURE MY CONDITIONING IS GOOD. WHEN I’M IN GOOD SHAPE I’M TOUGH TO DEAL WITH.”

StrLive: Do you have a specific game plan or strategy to win your up coming fight with Givanildo Santana ?

Jaime Jara: “MY GAME PLAN IS TO NOT PLAY HIS GAME.”

StrLive: Is there anything you would like to say to your upcoming opponent?

StrLive: Is there anything you would like to say to the MMA fans?

Jaime Jara: “THANK YOU FOR ALL YOUR SUPPORT.”

SteroidsLive would like to thank Jaime Jara for the interview! SteroidsLive will be in your corner! For all you fight fans, show some support for Jaime Jara. Check out JaimeJara.com and buy one of his bad ass T-Shirts!

Check out this kick’n highlight video of Jaime Jara throw’n down.