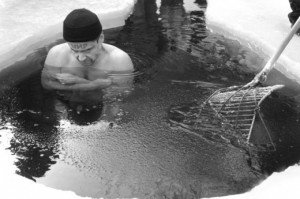 We are all fully aware of what cold water immersion, or “ice baths”, are. They are incredibly uncomfortable and yet extraordinarily invigorating. Professional (and maybe some amateur) athletes use them during intensive training periods in order to facilitate a more rapid recovery between workouts. I’ve touched upon something very similar in the “Kick-start recovery by washing your face” article, which explained that cold water to the face activated the parasympathetic nervous system (PNS) which then helped initiate recovery. But ice baths involve completely immersing the body in temperatures just above freezing (as in less than 60 degrees). This obviously has many biological effects and cannot be sustained for long periods of time. At most, athletes stay in ice baths for about 5-10 minutes. Much longer immersion can result in frostbite to the extremities, loss of consciousness, organ failure and eventually death. Fun.

Two researchers in the UK have composed a review looking into cold water immersion in order to determine the rationale for using it for sports recovery. They noted the obvious effects you’d expect, including deeper breathing (jump into a cold shower and you’ll know exactly what this is and how it feels), faster heart rate and higher blood pressure (due to blood vessels near the skin contracting rapidly in order to conserve heat and direct blood around the important organs). They also noted an increase in the catecholamines epinephrine and norepinephrine in peripheral tissues. This may explain why athletes claim that their legs feel more refreshed after an ice bath.

What I find most interesting (or strange, I guess), is that the researchers claim that the reasoning for employing such a technique remains unclear. This is a technique that has been around for decades and many an athlete has supported as being sound practice for enhancing recovery.