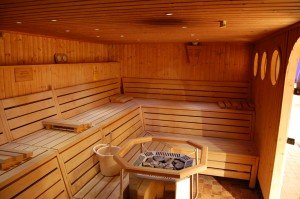 For some people there is nothing more relaxing than a hot sauna after lifting weights, but some new research coming out of the University of Montana is suggesting that this may not be the best time for it.

Post-exercise is one of the best times to eat as you have set up pretty much the perfect portioning – almost all the calories you consume will go towards the muscle. For years magazine articles and advertisements have pushed this as the ‘window of opportunity’ and to some degree they are right. That said, ultimately total calorie intake will determine what happens to your body in the long-run, even if you don’t take advantage of this ‘window’.

The study itself wanted to assess the effects of heat on glycogen resynthesis. To study this, the researchers recruited nine participants for two trials – one with post-exercise recovery at room temperature (i.e. the control test) and the other in a “hot room” which is about 90F. The participants depleted glycogen reserves by cycling for an hour in each experiment. After this they were given carbohydrates immediately and then spent four hours in the recovery room, receiving some more carbohydrates at the two hour mark.

What the researchers found was that muscle glycogen repletion was pretty much identical immediately after exercise and at the two hour mark, but by four hours the glycogen in the room temperature trial was significantly higher. I have discussed in a previous article that a splash of cold water to the face can help hasten recovery from exercise, that ice baths help promote recovery, and that “The Glove” can help improve performance. This study suggests that a luke-warm or even cold shower after training may be a better choice over the sauna.

The study in question did not use a sauna, nor did it use temperatures quite as high as you’d expect in a sauna (170F and above according to wiki), but that goes to show even more so that it may be a bad idea to sweat it out after lifting weights. If 90F negatively impacts glycogen synthesis rates then 170F most certainly will.

On a similar note, a study from 1996 showed that the temperature that you train in can affect muscle glycogen, with depletion occurring at a faster rate. So while it may have looked hardcore seeing Ronnie Coleman sweating like a mad man in his 100F gym in Texas, climate-controlled air conditioning may be best for optimal performance.

Muscle Growth
High School Steroid Use, The Dark Side Of Juicing
Generic Labz Cissus Drol
So You Want To Do Your First Steroid Cycle