Former San Diego State and NFL running back Femi Ayanbadejo has reached a settlement agreement with ALR Industries, a supplement company owned and operated by A.L. Rea (Scott Jensen) the author of “Building the Perfect Beast” and “Chemical Muscle Enhancement”.

Ayanbadejo had alleged in his suit that there were banned substances contained in Max LMG, a pro-hormone product produced by ALR Industries. He failed an NFL doping control test in January 2007, was subsequently suspended for four games, and ultimately said that the stigma of testing positive was a factor preventing him from getting back in the league. Attorneys for Ayanbadejo and ALR Industries, expressed satisfaction with the settlement, the terms of which were kept confidential. Charles Weller, an attorney for ALR Industries, stated that the positive test was a result of the athlete’s negligence: 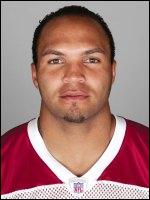 “Sometimes athletes have a valid claim against these companies, and sometimes they don’t. This was a perfect example of a situation where we don’t have a valid claim. Ayanbadejo tested positive for exactly what was on the label of Max LMG. In trying to save his career, he chose to point fingers at the supplement company. He took a dietary supplement without doing his due diligence.”

In this particular case, Mr. Weller’s words ring true, as Max LMG is an oral anabolic steroid, and ALRI is listed as a banned company by the NFL player’s association. In the course of the precedings, Ayanbadejo revealed that A.L. Rea (a/k/a Author L. Rea), was a pseudonym for Scott Jensen, and furthermore that Mr. Jensen was imprisoned for just under seven years, as punishment for his role in the operation of an illegal steroid ring.

Max LMG has since been discontinued, regardless, and ALR Industries will continue to pursue a defamation suit against Ayanbadejo.