Mary Jane and the Bodybuilder

Mary Jane and the Bodybuilder 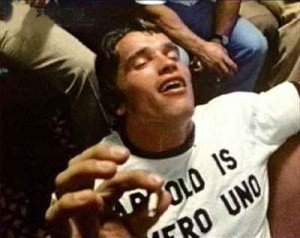 If you’ve been around bodybuilding for any amount of time, at some point you’ve probably come to the realization that drugs and bodybuilding go hand in hand, like a pair of 50 pound dumbbells. I’m not talking about “growing drugs” (or as bodybuilding champion Flex Wheeler calls them, “Sport technology drugs”), but so-called recreational drugs.

I first watched Pumping Iron when I was 13. I remember that very first time I saw Pumping Iron and got to the scene of Louie’s birthday party. Arnold was laying on a couch wearing a “Arnold is numero uno” shirt, and smoking a joint. Even then I remember thinking how incongruous it was for Arnold, Mr. Olympia, to be publicly smoking weed, a drug. I lost that naiveté many years ago…

Since then I’ve been in and around the gym for 16 more years, and had multiple stoned workout partners. You might think having a high workout partner spotting you sounds unsafe, and you might be right. I think it mostly depends on the drug your workout partner is currently taking. From my experience marijuana plus heavy metal music usually produces a surprisingly focused training partner; but if he’s listening to Bob Marley, watch out…

Most people involved in bodybuilding have heard of Nubain. I first heard about it from Dan Duchaine… the ORIGINAL steroid guru. I couldn’t have been more than 16 the first time I heard about Nubain. I remember being intrigued by having to use a needle to get loaded. My memories of those times are fuzzy, but I never remember being nervous to do an IV drug (Amazing how stupid and fearless we once were). Like many, I originally thought I’d use Nubain for post-work discomfort and to make cardio fly by (I never did a faster hour of cardio then when I was on Nubain). I started by using the stuff every few days. To using it every day. To using it many times, every day. One of the reasons Nubain seems so harmless is that it leaves the user functional and hardly impaired – if at all. Compared to other drugs out there, it seems like a something that ADDs to your life rather than TAKES away. Notice the italics on the word, seems. A workout partner on Nubain might be a little talkative, or easily agitated (depending on when their last shot was), but he feels no pain, and generally works out like a maniac.

I could continue to go down the list of other drugs one might take pre-workout, but I feel pretty safe in saying that, as far as I know, the rest of the recreational drugs available today, would be poor choices prior to a workout. Imagine someone rolling on ecstasy trying to spot you while you were squatting? Or a training partner on acid having a conversation with the bar as he bench pressed? 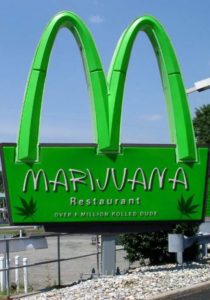 So, as Nubain has fallen out of fashion, that leaves us with marijuana; an oldie but goodie, that’s experiencing quite a revival right now, and is currently in style for pre-workout use among more than one top flight bodybuilder. I’ve been through stoned workout partners of many stripes, but I’m here to tell you weed smokers are the best. I have always laughed when I heard people say that smoking weed pre-workout increased their ability to focus. I mean, weed, INCREASING focus?! I guess it goes against everything I remember about smoking weed. I remember always being extremely hungry (i.e. The Munchies), slightly confused, and embarrassingly giggly. On a semi recent trip to Amsterdam I reaffirmed these old opinions, and added the observation that when smoked during the day, It makes me very tired. None of this strikes me as evidence that it’d make a good pre-workout drug. 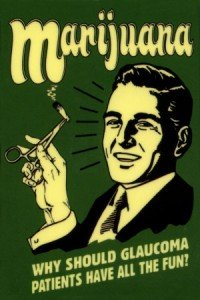 I have a new workout partner, Tim. It turns out he smokes weed as well. SInce coming home from Amsterdam I haven’t even seen weed, but I can never forget it’s smell (I’m sure most of you can relate). I recognized that weedy aroma on Tim last night. We met to train legs at 9 p.m., and I’ll admit I was not excited to destroy legs (because that’s what we do). After getting it out of Tim, that yes, in fact, he was, what he calls, “pre-game” smoker, I enlisted his help in an experiment. I decided to do a little “pre-game” smoking myself!

Tim suggested that to fully appreciate the experience I had to turn up the volume of my ipod, full blast, and avoid talking at all costs. I took his suggestions, and I’ll admit, whatever the reason I had a really good leg workout last night. I won’t bore you with the reps, sets and poundages, but I will tell you I pushed harder and moved more weight than usual. One thing I definitely noticed was my heart rate was higher… maybe because of the weed, maybe because Rage Against the Machine was playing full blast… I don’t plan to make this part of my pre-workout supplement regimen, but I can’t say I’ll never do a little “pre-gaming” again.