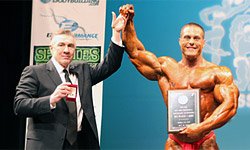 At the IFBB New York Pro this year the day was carried by a 27-year-old first-timer Evan Centopani to the ear-splitting cheer of the New York City crowd. The new pro put in quite an impressive performance and scooped up an Olympia qualification, $15k, a NY Pro ring and a good deal of popularity.

Big Dennis James followed on his heels, mustering all his 247 pounds in a perfectly tight show, beating his own previous appearance at the Arnold.

The walls of the Tribeca Performing Arts Center got a good shakedown when it was let out that the popular Marcus Ruhl was the third. His freakishness was running high as usual, but there were many who shrugged at his physique judged as not quite up to the mark.

Silvio Samuel seemed a bit off color, distrait or maybe put out due to an early low callout; yet he made it to the fourth place.

On the contrary, the well-tanned Hidetada Yamagishi looked sprightly and on his toes, acquitted himself well and became the last one to collect that evening.

It places Evan Centopani and Marcus Ruhl in this year’s Olympia lineup. The oncoming show gives definite promise of presenting a fairly fierce competition for the qualification.

202 division, which ran a high level of competition too, ended in the New Yorker Kevin English’s favor. It is the second year in a row that he does the trick! English proved his worth with a vengeance and threw his impressive upper body around very much to his credit. He cut a great figure for all his drawbacks (his right and left legs are not a perfect fit and experts find fault with his midsection). Yet looking at his chest you may easily mistake his weight for a bigger one.

Mark Dugdale made a great second in his second consecutive show. He’s a hard opponent in all times and he was clearly on the top of his form.

Dave Henry, memorable from the last year, was successfully booed onto the third place. His upper body continues to please the eye, yet his conditioning held him back some.

Touching on the subject of women, Cathy LeFrancois is still keeping a firm grasp on her last year’s victory. Shining a winning smile, flashing her comely appearance and well-lined musculature she remains a true NY Pro and a stealer of the public’s hearts to boot.

53-year-old Betty Pariso’s years sit well on her, with not a slightest blemish to her muscles, and granting her the runner-up spot.

The “Nubian Caribbean Queen”, Rosemary Jennings, came in third. Rosemary has always been a prominent female competitor in bodybuilding and is sure to be noticed for her flawless musculature at the Olympia.

Below you’ll find the final placings.