Conquering First Encounters with Women: Is She in to You?

Conquering First Encounters with Women: Is She in to You? 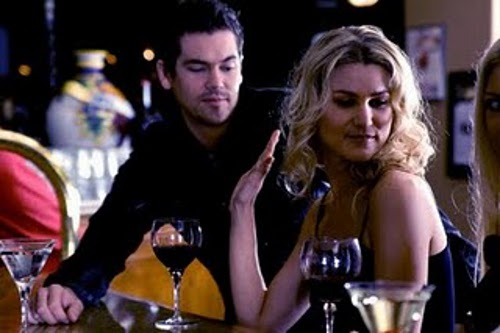 Picking up signals of whether or not a woman is into you can be difficult for some men.  The start of a relationship can be challenging if you have ulterior motives.

If the woman is aggressive it may be easier.  You could be talking to her about the weather and next thing you know she’s rubbing your leg and has her tongue down your throat.  However, if she is aggressive and has not made the first move, chances are that she is not into you.

If the woman is passive, the signals may not be easily recognized.  In these instances it is kind of like fishing; if you wait too long to set the hook you may lose the prize fish altogether. There is no exact science to picking up women, but over time there have been some things that have proved to work well.

First there are some things you need to figure out about yourself and your goals when pursuing a woman you meet for the first time.  Along with those I will give you the things to look for when trying to figure out whether or not a woman is into your business, as well as how to close the deal. 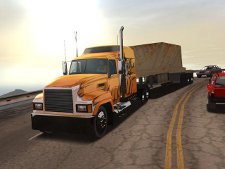 Let’s say you’re out at a bar and see a woman of intrigue for the first time.  You need to ask yourself, what are my intentions with this woman?

If the conversation is going well, which I’ll explain in greater detail later, is this a woman you might want to see again and again?  If so, there are certain techniques needed and different signs to look for to know if things are going well.

If the conversation is boring and you may be looking to get a little “strange”, then faking interest in what she has to say will probably get the job done.  I hate to recommend this, but it’s the truth and it happens more often then people would like to admit.

I would actually recommend that men pursue a woman with the attitude of seeking a potential relationship.  Even if your motives are to get in her pants, you’ll find a higher success rate this way.

Think of it like this, when going out to eat you may be in the mood for sushi once a month, but eventually you want to be eating Mexican for the rest of your life. 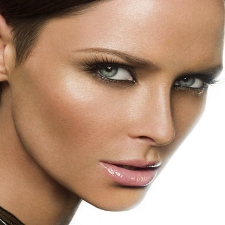 When you’re at an establishment filled with your peers, the first thing you should do is survey the field for talent.  Don’t do it like a creep, make it casual and inconspicuous, like a lion hunting for dinner.

As you scope out the room, often a woman who has already noticed you will take the opportunity to lock eyes for brief second before looking away.  The worst thing you could do now is stare, point, or tell your loudmouth buddies to check her out.

The best thing to do is look away and continue to find other interesting things after the initial eye contact.  If there is an actual connection she will lock eyes again, and this time it should be longer.  At this point I feel like it’s ok to give a slight smile and gauge the response.

If you receive the smile in return and/or some sort of hair adjustment, this is a good sign and interest is confirmed. If not, it doesn’t mean you’re out, it just means she may be a tougher nut to crack.

Eye contact is also very important after you’ve engaged in conversation, not only when she is talking, but also when you are talking.  Often times a woman may be trying to get some sort of sense of who you are and asking herself whether or not she wants you to see her naked.

If you lose eye contact during conversation this is bad; it probably means she is looking around for something or someone more interesting. 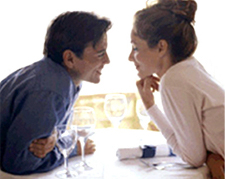 This is probably the hardest part of starting a new relationship in which your intentions are greater than just a platonic friendship.

Nerves can play a part when approaching a woman for the first time.  Finding a reason to start the conversation can sometimes be difficult.  You can wait for the opportunity to pass her on the way to the restroom or bar, and there’s always the option of just going over to her without a fake reason – I call it “sacking up”!

It is important to make the first thing you say sincere.  If you are a cheesy guy, then say something corny.  If your thing is humor, go ahead and give it a shot.  Genuine men should just speak from the heart.  Whatever you do, be yourself.  Women can sense when you’re trying to be something you’re not and that is a definite turnoff.

I don’t recommend opening with, “What is your name?” After there have been a few exchanges you can ask for it. Also nothing overtly sexual like, “Nice dress, I bet it will look great in ball on my bedroom floor.”

Even when you receive a positive response, sometimes it is a good idea to find a reason to leave for a moment and then return now that the ice is broken.

If you’re attempting to approach a girl who is by herself in a place like a coffee shop or bookstore, conversation may be easier to initiate – although some men find it easier when they have some liquid courage in them.  Starting a conversation with a woman who is solo might be about something she’s reading, wearing, or studying.

If she isn’t very responsive to your attempts at conversation, chances are that she does not want to get to know you. Don’t be discouraged, reel in what you’ve learned and recast in a different direction. 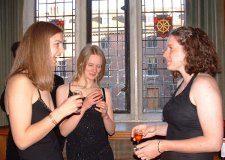 If you have reached the point where you are now in conversation and things are going well, this next note is vital.

In most situations, women go out at night with their friends.  You must remember to engage the friends in conversation as well.  Make sure that your targeted interest remains the focus, but a woman will always ask her friends what they think of you and you want to give them something positive to say about you.

Ask a lot of questions about them, make it seem like you’re thirsty to know who they are as people.

If it appears things are going well and the friends like you, they will start to give you some space and your female interest will allow you to separate her from her friends – perhaps to go get a drink, go outside to talk where its quieter, or maybe even to dance.

When all goes according to plan you have located the girl, then isolated the girl, and now it’s time to find out when she will surrender to you – just like the hunting lion.

Availability, Something to Look Forward To

The real test of how into you she is would be asking to see her again.  If there are non-specific barriers for why you can’t meet in the foreseeable future, she may not be that interested.

You must also consider the fact that maybe you have caught her at busy time in her life or big transitional period, and a night of innocent conversation may be all she’s looking for at the moment.  Don’t let this stop you from giving her your number and asking for hers.

If you are going to ask her to hang out again, use what you’ve learned to your advantage and invite her to something that might interest her.  For example, if she is into art, tell her about some exhibit that you’ve wanted to see – even if you could care less about art.

If it’s humor she’s into, take her to a comedy show or the new funny movie that opened up.  I wouldn’t recommended inviting her over to your place unless you’re having a party or something where she can invite her friends.  Always try to let her decide when it should be one-on-one for the first time.

If you only say we should get together some time, it could decrease your chances of seeing this girl again.  “Get together” and “some time” can be too non-specific for some women and leave them with little reason to look forward to seeing you again.

Applying all of this should lead to having more successful encounters with women and help you identify whether or not she is into you. Be sure to come back soon when I explain another helpful tool in handling first encounters with women, the significance of female body language.

So You Want To Do Your First Steroid Cycle
Jose Canseco, The Godfather Of Steroids In The MLB Or Something Like That
Muscle Growth
Delayed Onset Muscle Soreness (DOMS)