Where to Buy Steroids Online Guide To LEGIT SHIT

Where to Buy Steroids Online Guide To LEGIT SHIT

We’ve all seen the ads…

And for what? To get ripped off…

WHERE TO BUY STEROIDS ONLINE, THE HOW, AND WHERE TO GO-

I remember the first time I saw a really jacked guy.

I had only seen comics that had men with muscle and My parents were religious freaks so any comics I did get to see my dad would draw over the bodies (solid shirts, and dresses for the females) so you couldn’t see any detail.

They had this huge Bible that sat on their dining room table. It had pictures in it and I starred in awe of the demon and devil like creatures in the paintings that were printed in this book with rippling muscles and strong stature.

This was ok you see because it was a bible.

It was the mid-seventies and we moved around a ton so my parents could go from church to church with their “ministry”.

We didn’t have a TV so I didn’t see much outside of my parents church, grocery store etc.

“Men were either skinny or fat. That was it. And it seemed like the fat guys thought they were the tough guys.”

The incredible hulk was a popular TV show at the time and I remember seeing a poster for the show at a local mall.

I just stood and starred at it. My mother quickly pulled on my arm and hurried me along. “that shows about demon possession” 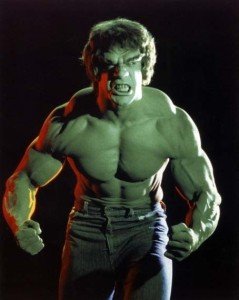 Back then where I was, guys just said they were strong… or tough… or whatever. Where we were there was no jacked guy in the room or at the school.

It was just different.

Then I was at one of my parent many church trips. And there this guy was.

He was doing a Lift for Jesus campaign.

I had never seen Christians promoting anything like this.

Or anyone for that matter.

I was maybe 5years old but I can still remember it.

He did this huge presentation about how he’d never attempted to lift this kind of weight before.

Then he would ask jesus for help and he’d do the lift.

It was very “circus tent” now looking back on it.

Everybody watched in awe and even at that young age I could see it made my dad uncomfortable.

This guy came several times that year and I always saw men looking at him with respect mixed with jealously and a little I want to do that too.

The women…well let’s just say they weren’t looking at him with disgust.

Heaving chest, jacked arms, and shoulders as wide as a truck.

The guy was handing out shirts to promote himself.

And I wore it around the house and lifted brooms (or anything else I could find) and made those grunting sounds like I was in pain.

Fast-forward years later. I’m now 10 and my parents were nice enough after a ton of begging to let me get a set of weights.

These were the plastic weights with the mixed concrete in them.

I was doing any exercise I could.

I met a neighborhood kid that wanted to lift too and we made our little basement area “the gym”.

One day he came banging on my door.

He had in his hand a bottle.

I asked what it was.

Now we were just kids and at this point only heard about stuff like that on the radio or tv (we finally had one).

I asked where he got them.

Excitedly he goes “AT THE MALL!”

“THIS GUY TOLD ME THESE WILL DO THE SAME THING AS STEROIDS!”

It said “amino acids with yeast” on the label.

We couldn’t wait we took one a piece and that evening we couldn’t shut up about how big we were gonna be.

We went through the whole bottle, lifting our little asses off.

And so it began… our quest for the perfect product.

We bought everything, mowing lawns, washing cars, whatever we could do to get some cash for a good product.

We did Herbalife, This product called Joe Weiders BIG (a big coffee sized can that you opened with a can opener) and the list went on and on. 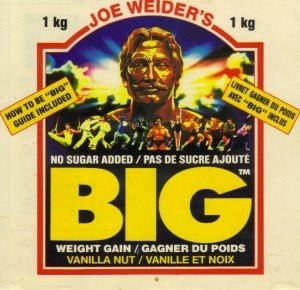 It’s now after high school, just graduated, 17 years old, and several guys I know are using steroids.
We didn’t have an option to buy steroids online at the time.

I was nervous but wanted to try.

They were trying to kill me with prices and I just couldn’t afford it.

I guy I was lifting with had this book called “The Steroid Bible” and we read it relentlessly.

We finally found through mail order a place in Greece and bought some Testosterone.

1 little vial, 1ml. Just a test run, but when it came we were like, success!

My friend ended up keeping the test and we were to nervous to order again.

Im now 18 and Im trying Deca that I bought through a friend, my very first steroid. I would have done it different looking back now.

But its what I could get through a friend that wasn’t trying to rape us with prices.

It was called Nandroxyl 250 from Kalpa Pharmaceuticals

I jumped right on it. Couldn’t wait. 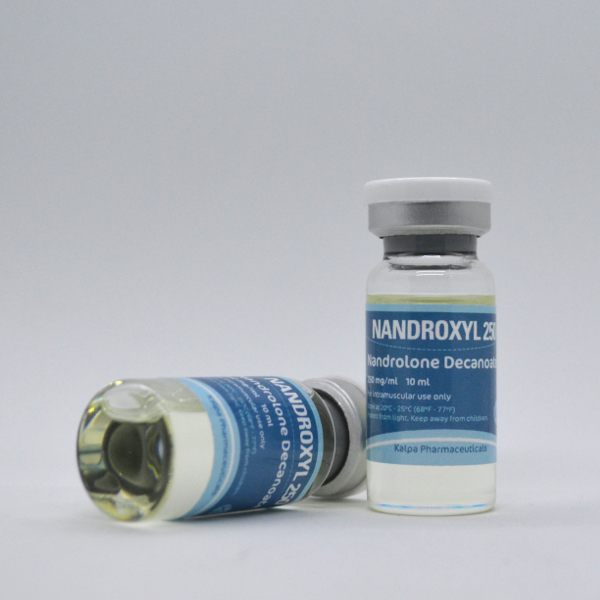 It was very successful and I was very happy with the gains I made from it.

Well over 220 now and growing.

Time went on. I cycled on and off for years. Some times taking a few years off then running something else.

I never wanted to compete. I just wanted to lift, and though some may condemn me for using when I wasn’t competing.

I honestly couldn’t care what you think.

I was having a blast and I went from being the smallest guy in the gym to one of the biggest.

My mind was blown the day a big guy came up to me while I was doing some tri push downs at the gym and asked me for advice.

I though he was making fun at first but then I looked in the mirror at both of our reflections, and I remember thinking…wow.

This wasn’t all juice mind you I was only using few months out of the year back then but still growing like crazy.

One thing I’ve learned over the years. Nothing will replace hard work. There is no magic pill for anything. Do steroids help? hell yeah, but you still have to bust your ass…period.

It had been some time since I used anything.

I didn’t want anybody to know I was gonna jump back on.

I looked for some steroids online.

I found a bunch of web stores.

I picked one and ordered.

I did some more looking and bought a pharmacy list off a web site that looked legit.

The place seemed like they were on point so I ordered from one of the pharmacies on the list.

A SMALL ORDER JUST TO SEE.

Damn, 4 weeks later I was back using again.

I noticed things were a bit different. No US stuff.

Companies I had never heard of before, weird packaging, etc.

BUT stuff seemed to be working and I was off again to pack on some mass.

A few years go by. The pharmacies on that list I bought started dropping off one by one.

Now this guys a bit off. And when I say a bit off I mean he will stand around and tell you about how he’s a “genius” and he’s “amazing” and your ears will bleed in 5min.

And you would have a serious case of alcohol poisoning in under 10min. No kidding

This guy will tell you he’s “training for an event” and what that means is he is going to stand around at a comicon in a costume and tell you he’s doing it for his “fans”.

And no hes not paid to be there, but in his mind he is. He once gave me a cheap tshirt he had ironed on a picture of himself in his costume on it and told me “I made a bunch for my fans”.

He had a box, I couldn’t believe it. But I was nice… I didn’t say shit.

Anyway after many “I’m ordering from my source calls” I finally said what the hell…and ordered some Tren acetate.

I shot 3xs total from that vial.

They were really painful, and my last shot in my leg left me unable to walk for 2 days. It felt like I had a serious injury.

I called this moron and asked about it and he goes “weird I’ll call my guy”.

I tossed the shit out and ordered from one of the still existing places I knew.

Finished my cycle and everything went well.

I didn’t cycle for another year.

At which time the last of the pharms I was using were gone.

Mr. no marbles again calling to bore me with how he thinks he’s a genius, famous, and telling me he’s ordering for everybody again.

The first few weeks in I looked weird.

I had red bumps showing up on my face.

Small at first then getting bigger.

Until my whole face broke out in massive acne.

Now…I’ve never even had a zit…nothing

I think the whole time I went through puberty I may have had 2 zits that came and went so fast it was like I had never had them.

Now I’m in my 30s with my whole face covered in acne.

THROW THAT SHIT OUT!

But it stayed. Green puss was coming out of my pores. If I just pressed on my nose green puss would ooze out.

It was unbelievable. I and my poor girlfriend bought everything over the counter we could. Nothing worked.

After 5 months of being clean and using everything in sight I finally went to a dermo and got it looked at.

Everything she tried failed.

It’s now a year later…no kidding… I still had this stuff on my face.

I went to a new dermo after my girlfriend pleaded with me to give it another shot.

And I’m glad I did. Finally this guy gave me some cream and pills that knocked it out in 2 months flat.

I showed a pic of my face to Mr. No-marbles since we have lived far apart from each other for years. “that sucks” was the reply.

That’s what I get.

Turns out this complete idiot has had health issues out the ass and didn’t think it was related.

In the time between I had researched everything I could about the company that was listed on the label of the total shit this moron with the cheap iron on t-shirts was peddling.

Turns out I’m not the only one with these sides.

Took some looking and experimenting, but I ended up finding a internet service that’s killer

It was a step in the right direction and I’m now a customer for life.

I’ve ordered from these guys for a long time now.

And I HIGHLY RECOMMEND THEM.

I turned Mr. No marbles onto these guys and within months hear from him “I FEEL SO MUCH BETTER!”

It sounds crazy…but its a true story.

I have no doubt hes out bragging about “his source” and taking orders from people he knows so he can feel like a big shot.

However if he uses these guys at least this time he’s pointing people in the right direction.

So if you’re a long time user, or you’re a new user and ready to take that next step, here is the site I use exclusively now:

– They have almost everything

– No pip, no sides on almost all products except what you would normally get from any healthy cycle

– I’ve only found one… from time to time the site will go down for 24hrs but then its back up and running usually within a 24hr period.

WHATS THE PROCESS & WHAT TO EXPECT