UFC 106 Recap – Griffin Gets His Revenge

UFC 106 Recap – Griffin Gets His Revenge 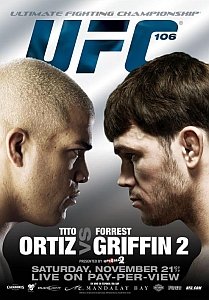 Well they say hindsight is 20/20, but looking back on last night’s fights, there were definitely a few things I missed when making my fight predictions.  I went 3-4 overall and the only fight I was 100% correct on was “Lil Nog’s” knockout victory over Luiz Cane.

On the opening fight of the Spike TV portion of the undercard, Kendall “The Spyda” Grove withstood an early assault from Jake Rosholt and pulled a beautiful submission off.  As I expected, Rosholt used his wrestling to take Grove down repeatedly, but what I should have seen coming was Grove’s excellent jiu-jitsu.  Grove had a very nice defensive guard and when Rosholt got a little sloppy in full guard Grove went for an armbar and quickly transitioned to a beautiful triangle choke from the bottom to get the fast tapout.  Rosholt was visibly frustrated after the fight but he only has himself to blame.  You should never give an opening to a Brazilian jiu-jitsu practitioner.

In the other Spike undercard portion, Ben Saunders absolutely massacred Marcus “The Irish Hand Grenade” Davis via first round knockout.  I was correct about Davis’s advantages in the boxing department, but wow, Saunders used his Muay Thai skills to absolute perfection.  If Davis stepped back too far, Saunders would pop him with leg, body and head kicks.  When Davis came a little too close, Saunders would put him in the Muay Thai clinch and unleash a series of knees to the head and body.  There was only an extremely small window where Davis could use his boxing without being pummeled, and he never found his range.  After about 3 minutes in the first round, Saunders landed his most powerful knee of the night that sent Davis to the floor to end the fight.  I’ve always been a huge Marcus Davis fan but I’ve never seen someone make him look so bad before.  Ben Saunders has a legitimate future in the welterweight division.

In the opening fight of the main card, Amir Sadollah withstood the early storm from Phil Baroni and then proceeded to punch, kick and knee his way to a decision victory.  Phil, “The New York Badass” came out very strong with a huge initial flurry of punches and uppercuts in the clinch but about halfway through the first round he appeared to completely run out of gas.  Sadollah proceeded to perform a Muay Thai clinic on him for the remainder of the fight but you have to give props to Baroni for refusing to quit.  He was bloodied and beaten, but he was still going for the homerun knockout in the last round.  Sadollah landed a huge amount of flush shots so something has to be said about his lack of stopping power, but overall he looked pretty good.

Antonia Rogerio Nogueira provided the fireworks of the night with a monster knockout win of rising light heavyweight prospect Luiz Cane.  Cane looked completely defenseless to the more technically proficient striker Nogueira, who was making his UFC debut.  Nogueira landed a huge left hand in the first minute that had Cane reeling and he proceeded to drop Cane with a viscous left to finish the fight in the first two minutes and earn the Knockout of the Night bonus.  This was a great introduction to the US fans for “Little Nog” and I’m very excited to see where he goes from here.  He has definitely put himself right in the mix with the other contenders at 205.

Paulo Thiago won via decision over UFC newcomer Jacob Volkmann in an unusual back and forth battle.  Thiago definitely got the best of the standup, dropping Volkmann three times total with his combinations, including a huge shot right at the end of round 1 but he never went in for the kill to finish the fight.  Volkmann appeared to be the stronger fighter on the ground and despite losing the first two rounds, he almost pulled out a victory in the third with an impressive Darce choke from the bottom.  He also put Thiago in the dominating crucifix position and unleashed a series of shots to his head before Thiago escaped.  Overall it was a pretty impressive performance by both fighters but Thiago scored the big points early with his big knockdowns in the striking department.  Poor Paul Thiago has had only 3 fights in the UFC and they have all been against some of the top wrestlers in the welterweight division.  Hopefully they give him a break in his next fight.

In a matchup between two of the best welterweight contenders, Josh Koscheck submitted Anthony “Rumble” Johnson in the second round.  This fight could have been the best of the night if it hadn’t been marred by illegal strikes.  In the first round, Johnson stuffed a Koscheck takedown attempt but then kneed him in the face while Koscheck was still on the ground.  Johnson was deducted a point and the fight was stalled for 5 minutes as Koscheck was allowed to recover from the blow.  In the second round, Koscheck got his revenge with back to back eye pokes that stalled the fight yet again.  The fight finally got some action with a huge back and forth exchange of power shots before Koscheck wised up, took Johnson down, gained a dominant position and submitted him via rear naked choke with 13 second left in the round.  Johnson may be one of the most exciting strikers in the welterweight division but if he truly wants to be a contender, he will need to improve his grappling and submission defense drastically.  He was exposed tonight on the ground.  After the fight, Josh Koscheck called out Dan Hardy, who was awarded a title shot against GSP after his decision victory over Mike Swick at UFC 105.  Koscheck won’t be getting a title shot with this win, but I expect he will soon if he gets one more victory over a welterweight contender (John Fitch?).

The main event of the evening certainly didn’t disappoint.  I had made up my mind beforehand that Forest Griffin would not be in the right mindset for the fight. I assumed he was still haunted by his embarrassing loss to Anderson Silva but I knew he was back when I heard his entrance music, Tubthumper by Chumbawumba.  Hearing the lyrics “I get knocked down, but I get up again, you’re never gonna keep me down!” blasted over the loudspeakers brought a smile to my face.  This was vintage Forest Griffin, he was back.

I also should have known better than to get sucked in by Tito Ortiz running his mouth.  He had proclaimed he was 100% healthy for the first time in six years, but he was already sporting a nasty black eye that he suffered in training two weeks ago.  Forest won every single exchange when the fighters were trading blows standing up, but Tito smartly went for his bread and butter takedown in both the first and second rounds.  He landed several clean elbows and punches on the ground but never improved his position and despite opening a cut on Forest in the second round, Forest reversed his position and got on top of Tito.  The first two rounds were very close, but the third was all Forest.  Tito looked completely gassed and Forest turned him into a human punching bag.  For the entire 5 minutes of the round Griffin pressed the action with combinations of punches and kicks that had Tito retreating.  Ortiz went for one feeble takedown in the third but Griffin shrugged it off and continued his assault.  This round could have easily been scored a 10-8 for Forest.  After the final bell rang, it was announced that Forest had won a split decision and the crowd went nuts.  This was a really big win that Griffin needed badly and he was visibly moved in the post fight interview where he and Tito traded barbs.  I would not be surprised if there was Griffin vs Ortiz 3 sometime in 2010.  This was a very good fight, and the rubber match will need to take place at some point.