While action raged in the ring during the Pillman 2000 event, Torrie Wilson was one of the stars who milled around the backstage area long enough to get cornered by Yours Truly. Requirements on her time — preparing for her appearance — meant this conversation was much shorter than some of the others you’ve already read transcripts of. Unfortunately, the hustle and bustle of the backstage area also rendered my tape of this chat much less clear than some other interviews I did (meaning I’ve had to clip some portions and do some paraphrasing of others to maintain some semblance of a logical flow). If the depth of questioning or length of answers seem insufficient, it’s because of the combination of those two factors. Just do not blame Torrie.

Torrie, I know you didn’t even break into the business until after Brian Pillman’s death, but I’m starting everybody off by asking what Pillman memories they have or what brought them here tonight. Were you at all familiar with Brian’s work from TV or have you heard any cool stories?

Torrie Wilson: Basically I’m here because they asked me to do it, but yeah, I’ve heard a lot of great things about him, too. This is a great thing, it’s for charity, and I feel really bad for his family. I’m happy to be here to help out.

Now, moving on to current events, you’re really in a much higher profile role in WCW these days. Are you enjoying working with Hulk Hogan?

In addition to just working with Hogan, you and Billy are just really moving up the card, doing more interesting stuff. What else do you see beyond this current feud?

TW: Yeah, it’s a blast. I’m just having an awesome time. I’m even getting ready to get in the ring and take a few bumps.

Really? So have you been training already? At the Power Plant?

TW: Not yet… I’ve been working too much to go train. But whenever I get some time off, I’m going to head down and try to learn a few things.

Do you just want to be able to get more involved in matches, or do you actually want to step into the ring against the Madusas and the Monas?

TW: Ummm, not really, no… I don’t think I can compete with them. But who knows, maybe I have a natural knack for it? [LAUGHS]

How about the general atmosphere in WCW these days? With Russo and Bischoff back, how big a difference has that made?

TW: You would not believe the difference, the turnaround. It’s like 500 percent better. It’s so weird, I mean, everybody is completely different. It’s a great place to work.

How about with you personally? I mean, I think Russo has got the reputation of — well — using the female talent on his roster to maxiumum effect….

TW: [LAUGHS] Yeah, he does. He likes to use the women, which is great for me. I don’t think Kevin Sullivan liked using women as much, so I’m really excited to be working with Vince again.

As far as the sexual connotations, who knows how far that will go?

So that’s not really a problem for you?

TW: Well, I don’t plan on getting down to my skivvies out there any time soon! But no, I don’t think it’s really a problem…

OK… right now, you’ve kind of got a thing going with Horace Hogan. Is this something where you can see yourself expanding your stable like a more traditional wrestling manager, or is it more just a short term storyline thing?

TW: I think it’s just a short term thing, really. As long as we’re feuding with Hulk, it kind of goes along with the territory. I don’t see it lasting that long at all…

Being here tonight, this is probably your first chance to see some performers from other companies, first hand… are there any people or matches you particularly want to see?

TW: You know what? I don’t even know who all’s here…

[Chuckling] There’s a lot of that going around, it seems….

TW: There’s just so many people packed in back here. But yeah, it’s just great to get to meet everybody for the first time.

Alright, I know you’ve got your match coming up and I don’t want to take up too much more of your time…

TW: Oh, I appreciate that…

OK, so on behalf of myself and our readers, thank you for taking a few moments to chat, Torrie. 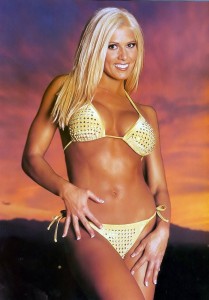 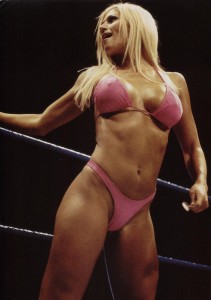