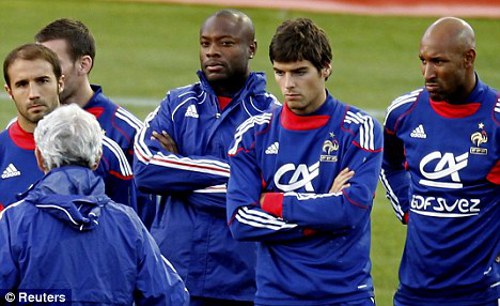 The 2010 World Cup is looking to have more disasters than successes. We’ll ignore the fact that no one but Brazil and Argentina can score because there are some teams who are a mess.

It’s been reported that Japan’s squad has a “locker room leak,” but the reports haven’t gone past that. In every locker room there’s somebody who talks to the press too much.

However, France has these problems and so much more. In case you didn’t know, France qualified for the World Cup by cheating against Ireland in their final qualifying match. They scored a goal with the assistance of a handball.

There’s also that whole “French people are rude” thing that we should consider.

Have the French run into “bitchy karma,” or did they just run their team badly? I’m thinking it’s a combination of the two. Just check out what they’ve done.

They Tied and Lost

That’s right, they kissed their sister and lost in their first two World Cup matches. There have been many ties at the World Cup in 2010, but France couldn’t afford one. Any leverage they might have had went out the window with the tie.

Next, France took a bad loss Mexico in a match they should have been able to win. It was after the loss to Mexico that things started to unravel.

France’s coach, Raymond Domenech, had already given up hope. He told the AP:

“We feel a great disappointment and sadness. We struggled. At the moment I really don’t have an explanation for it.

“We should still be proud enough to look forward to winning our next match. There is still an infinitesimally small chance that we will go through.”

That’s the sound of a coach who has thrown in the towel, don’t you think? Usually coaches say something like, “We can still do this.” Plus, what sports coach actually says “infinitesimally?”

Domenech opened the door for a tirade that would send the French team reeling. His attitude probably cost France any chances they had of advancing.

You see, Nicolas Anelka got a little bit angry.

In the locker room at halftime of their loss to Mexico, Anelka was scolded by Coach Domenech for playing badly in the first half. Apparently, Anelka couldn’t couldn’t take the criticism. Yahoo’s Ryan Bailey was quoted as saying, “You should go and fornicate with yourself, you dirty son of a woman of ill disrepute.”

The only problem with kicking out Anelka is that he’s one of their best players. It’s not that he’s good — they’re all good — but he’s a star on this team. Anelka plays for Chelsea in England, and they just won the Premier League. The dude can play.

This gets funnier because these dudes are French. Isn’t French the frilliest language ever? Two men swearing at each other in French probably sounded like a loud tea party.

Then, a French reporter went on the “4-letter network” and used the profanity verbatim. Check it out here. Can you imagine the execs at ESPN scrambling to “bleep” that one? It makes me chuckle!

The French Decided to Stop Practicing

You heard me right. The French soccer team, after Anelka got sent home, decided they were going to stop practicing for a day. I suppose they forgot that they have a tie and a loss and only one match to go to fight for their lives.

“The problem of France is not Anelka, but the traitor among us. We must eliminate the traitor from the group, because he wants to hurt the team.

“There is no little mouse in the locker room. This comes from someone who is on the team and wants to hurt the team. We are not going to lie, the reporter [from L’Equipe] did not make this up.

“I do not know anything [about this person], I am not a magician.”

Basically, he’s calling someone on his team a liar and a cheat. Then, right after that, he and his teammates got together to write a statement explaining why they were striking for a day. Unfortunately, they made their coach read it to the press.

“The French Football Federation did not at any time try to protect the group. They took a decision uniquely based on facts reported by the press. As a consequence, and to show our opposition to the decision taken by officials of the federation, all the players decided not to take part in today’s training session.”

The Mayhem Spread All Over France

France’s team Director, Jean-Louis Valentin, quit after the players decided not to practice, noting that, “…it’s over. I’m leaving the federation. I’m sickened and disgusted.”

Well, you know you suck when your own people want nothing to do with you! The disgust is everywhere. I had an interesting conversation on Twitter with someone who actually lives in France who boiled it down for me.

Me:  but don’t you think traitors might be part of the problem?

7lovelyangel: Who do you call traitors? I think a team can’t win without being a team, and this one wasn’t a team.

At this point I’m thinking that this team was never right. That’s probably why Jean-Louis Valentin quit.  When you put together a crap team — you’re usually the first to hit the door.

Me: Anyone who leaks info to the press is a traitor — or starts locker room strife; was the lack of teamwork expected?

7lovelyangel: There’s not a lot of mutual respect in this team.

Well, that about does it. Take a bunch of overpaid soccer players and put them together badly — and this is what you get. I bet Anelka was itching to get kicked out. Haven’t some us wanted to get fired from a crappy job?

So, I took this idea to the next level and asked everybody:

I got this reply almost immediately:

raymondsmalley: I am totally leaning toward selfish French dudes…

What Did We Learn Today? 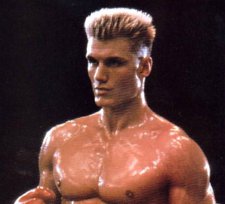 Chemistry is so important in sports, and France just never had it. I bet the only thing the French team agreed on was “not practicing.” Sure, athletes need to be confident, but there’s a fine line between confidence and ego.

That “fine line” broke down the French National Soccer team — the same country that played in the World Cup Final in 2006 and won the whole thing in 1998. It broke them like Drago in Rocky IV.

Perhaps Franck Ribery described their situation best, “Everyone in the whole world is mocking us now. I’m gutted, because we’re not playing football any more.”