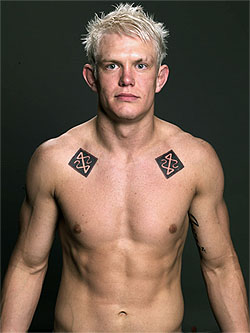 It seems like in every reality show known to man, there has been some sort of a trouble maker. This has been true even with The Ultimate Fighter Show. There are a few ways you can look at this. One, the producers of the shows pick people who will be sure to act out and cause “drama”. This drama is supposed to make reality exciting. Two, the contestants themselves over act, or act out in an attempt to gain recognition or to be memorable. Bad attention is still attention if you want to be a celebrity, ask Britney Spears. In fact, look how well know Chris Leben is now. Yea, he has a great overhand left, but he is much more well known for pissing on another contestants bed during The Ultimate Fighter. This and other bad behavior not only boosted ratings for the show, but also made Chris Leben famous.

Now we have others following the same path. Junie Browning is The Ultimate Fighter’s Season 8 Troublemaker. The main question is if browning is acting out to gain fame, or if the producers picked a wild guy to put in on the show to boost ratings. Browning says he is always a crazy guy

“They wanted to put an act on for the camera and act like they were someone different,” Browning told MMAjunkie.com of his “TUF” competitors. “I didn’t let the camera dictate how I was going to act. I would act crazy, or do what I normally do.”

I think personally think Browning wants to follow the footsteps of Chris Leben and gain fame from acting like a wild animal let out of the cage. What do you think?