Although women and MMA aren’t usually synonymous, women are making giant strides in gaining respect in the MMA community with the efforts of Strikeforce and ground-breaking talent that is being exhibited.

They are becoming an undeniable force in the world’s fastest-growing sport and gaining non-traditional exposure for MMA by showcasing their looks for the likes of Maxim and other men’s magazines, gaining new viewers by fulfilling every man’s fantasy: a catfight with no rules.

For most men, you couldn’t find a better combination of their two favorite things: women and fighting.  While it’s an age-old formula with WWE Divas and TNA Knockouts, MMA takes the rules and campy posing out of the game, showing that women really can fight and forging a place for women in a sport that has taken the world by storm.  For women, we’re happy to see unconventional role models: women who can fight a real fight and, in some cases, make men tap out. 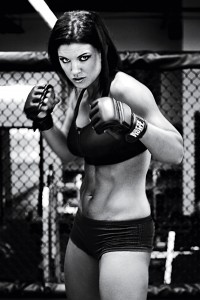 Gina Carano, widely referred to as the “Face of Women’s MMA,” has brought the most publicity and exposure to women in MMA through her undeniably beautiful face and physique and even more significant place as the world’s Unified Women’s MMA Rankings’ #3 Women’s Middleweight fighter, with a 7-1-0 record.

Many of us will remember her as American Gladiator’s “Crush” and her unforgettable Maxim spread.  She transitioned into MMA after garnering a Muay Thai record of 12-1-1, which earned her a place in the World Pro Fighting show, winning the fight with Rosi Sexton by knockout, and inevitably winning a place in sports history.

Carano has since fought with a variety of MMA promotions, including WPFC, Strikeforce, and EliteXC.  She has brought unmatched publicity to women’s MMA, appearing in the film Blood and Bone, starring in the cult film Ring Girls, Oxygen’s reality series Fight Girls, American Gladiators, the American Gladiators workout video, Command & Conquer: Red Alert 3, ESPN The Magazine’s Body Issue, and a feature story for ESPN’s E:60.

Her efforts have not gone unrecognized, making her the most rapidly rising Google and Yahoo! search and acquiring her positions on many “hot” and “most influential” lists: “Hottest Woman in America” by the Spring 2008 issue of Big Biz Magazine, Number 5 on Yahoo!’s Top Ten Influential Women of 2008, and, most memorably, Number 16 on Maxim’s 2009 Hot 100 List. 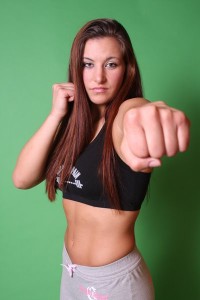 Wrestling on the boys’ wrestling team in high school, she segued into MMA when she joined an MMA club at Central Washington University, training under Bryan Caraway, and debuting at 2007’s HOOKnSHOOT Women’s Grand Prix. 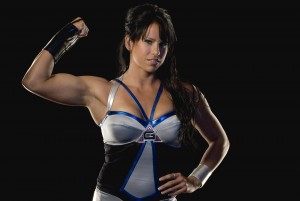 Thirty three year old Toughill began her career as a boxer, making a name for herself with an 8-2-2 record and legendary fight against Laila Ali.  She has earned respect and titles in all forums as a Brown Belt in Like Perez, Arianny Celeste does not fight in MMA; however, the list would be incomplete without mention of UFC’s hottest Octagon Girl.

This Mexican and Filipino ring girl debuted for UFC in 2006 at the Hard Rock Hotel and the rest is modeling legend, her involvement in MMA leading to work with: Playboy, Maxim, FHM, Fighter’s Only Magazine, and Sport’s Illustrated.  Maxim’s 2010 Hot 100 list ranks Celeste as #23 and was Fighter’s Only Magazine’s 2009 “Ring Girl of the Year.”

Celeste hosts UFC Ultimate Insider on Thursdays and uses her celebrity status for charitable work, hosting a fundraiser for the 2010 Haiti earthquake.  Although she lists kickboxing and muay thai as hobbies, we have yet to see her compete and hope she will make the transition to professional fighter. 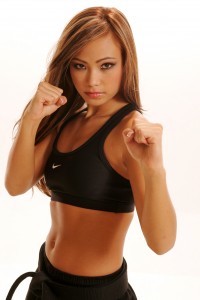 Michelle “The Karate Hottie” Waterson, has earned her nickname in spades. She began her karate training at the age of 10, earning her Black Belt in American Free Style Karate.  A Thai beauty, she began modeling in 2004 and was in the music video for “Head Crusher.” 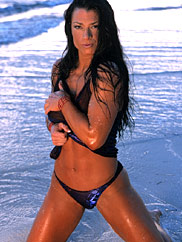 TNA star Lisa Marie Varon, formerly Victoria of WWE, has begun training with J.T. Stewart for her MMA debut, in which she will compete in concurrently with her TNA appearances.

She began her lifelong pursuit of athleticism as a cheerleader in high school and moved on to fitness and figure competitions, winning 1st in Tall Class at the 1999 Debbie Kruck Fitness Classic, 1st place in ESPN2’s 1997 Fitness America Series, and 1st in the 1995 National Physique Committee’s Inland Empire, placing in the 1998 ESPN2 Fitness America Series, 1997 Lifequest Triple Crown, Ironwoman Tri-Fitness, and 1999 National Physique Committee Team Universe.

Despite her rather humble WWE debut as one of The Godfather’s signature “Hos,” “The Vicious Vixen” moonsaulted, cartwheeled, hair-pulled, chin-locked, and suplexed her way to respect, becoming a two time WWE Women’s Champion.  Varon’s athleticism and fighting prowess will undoubtedly assist in her highly-anticipated pursuits in the cage. 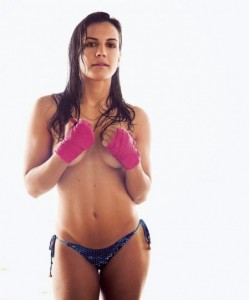 Kyra Gracie, great-granddaughter of Carlos Gracie and Brazilian beauty, has announced her transition to MMA in 2011, training under boxing coach Claudio Coelho.  Gracie is currently a Brazilian Jiu-Jitsu black belt and grappling world champion, making her decision to join the world’s fastest growing sport a natural choice. She needed only to acquire the necessary boxing training to complement her already solid fighting background. 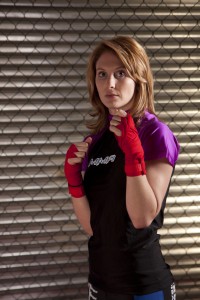 Eliasov entered XFC Africa’s Open Tryouts in April 2010.  She stunned spectators with her prowess for grappling, making the men she competed against in the tryouts tap out!  Her first fight was May 1st, 2010 at XFC Africa’s Fight Club 2. She continues to find it challenging to find women in her weight class, weighing in at a mere 53 kg (116 pounds).

She is pleased with the trajectory of her career so far, saying, “XFC has been very forward-thinking in allowing women on their card and I’m hoping other organizations will follow their example… The plan is to work on my BJJ game and keep on training hard and hopefully fight again soon.” 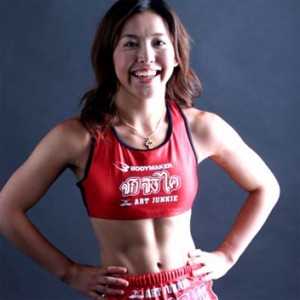 Satoko Shinashi undeniably holds the most impressive MMA record of the list, with a 29-2-2 record, fighting for the now-defunct Smackgirl and DEEP.  This Japanese female mixed martial artist is a true female warrior with an impressive artillery of armbars, specializing in sambo, judo, and jiu-jitsu.

While women’s MMA still has a long way to go before it becomes as widespread or followed as men’s, good promotion plus the undeniable talent of women like Erin Toughill and Gina Carano are bringing it into the spotlight.

As more women cross over to MMA from BJJ, wrestling, and boxing, the increasing pool of talent will bring more attention to the ladies and lead to more fights with better quality of match-ups. Don’t underestimate these pretty faces; they could do serious damage to yours!