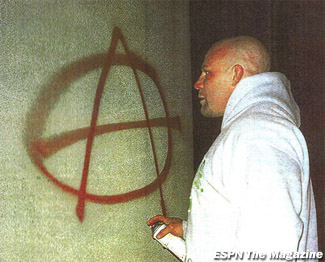 What the heck is the world coming to?  Rampage Jackson, going on a rampage with his truck and now Jeff Monson is getting arrested for tagging.  Word on the street is that a warrant for the arrest of former UFC heavyweight title contender Jeff Monson was issued following the emergence of a photograph in ESPN The Magazine.

The 37-year-old Jeff Monson, who has a professional mixed martial arts record of 27-8, is photographed tagging the state capitol building in Washington with an anarchy symbol.  Apparently, Monson could face up to 10 years in prison or a $20,000 fine if he is found guilty of first-degree malicious mischief, which is a Class B felony charge. The graffiti damages reportedly costed upwards of $19,000 to remove.  Monson is expected to turn himself in.

I guess it’s not good enough to be a famous MMA fighter.  Some of these guys have to find other ways to make headlines.