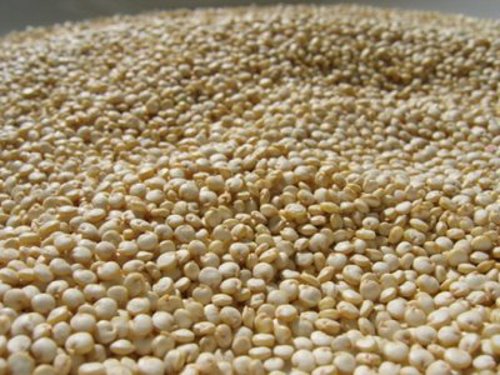 Continuing our series on whole grains, I realized that I promised you grains, and again I’m talking about a seed! Whether you classify it scientifically or culinarily, I hope you’ll come to classify this fantastic foodstuff as delicious!

Quinoa (pronounced keen-wah) is actually related to beets, Swiss chard, and spinach. Nothing thrills my heart more than that! Whether you choose the most common yellowish variety, or one of the more exotic orange, pink, red, purple or black versions, read on to find out why quinoa was once considered the “gold of the Incas!” 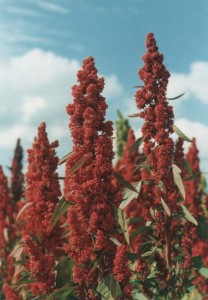 Over 5,000 years ago, the Incas cultivated quinoa as one of their staple crops and is still important today in the rural areas where their descendants remain. In fact, quinoa means “mother grain” in the Inca language! It is native to the Andres regions of Bolivia, Chile, and Peru.

Sadly, Spanish conquistadors all but extinguished use of the grain. In their attempts to destroy the people and control the land, they burned the quinoa fields and made growing quinoa illegal, under penalty of death.

Thankfully in the 1980s, two Americans rediscovered the nutritional potential in this ancient grain and began cultivating it in Colorado. In the 30 years that have followed, quinoa has become better recognized and more available. Good thing, too, since it’s packed with nutrition! Because it’s gluten-free, it’s also a great option for those who can’t tolerate gluten.

Quinoa is often referred to as a “pseudocereal” because, though it isn’t a true cereal, it is a broadleaf plant instead of a grass, like most grains. Also in this pseudocereal group are amaranth and buckwheat (stay tuned for more information on those “grains”)!

Quinoa is a complete protein, meaning it contains all nine amino acids not produced by the human body. Just one-half cup of cooked quinoa contains half your daily requirement of manganese, a quarter of the magnesium and iron you need, and 20% of the copper and phosphorus you need.

Manganese and copper are important antioxidants that help defend against and kill free radicals, which are believed to cause cancer in many instances. Magnesium helps relax muscles and ease blood pressure (great news for people who have migraines, as well).

Bodybuilders will want to add quinoa to their diets because of the abundance of lysine. This amino acid is essential for the repair and growth of tissues. It’s also important for vegans, who often struggle to get adequate amounts of protein. Don’t forget the healthy fiber content, helping to tone the bowel and assist in elimination.

If you have atherosclerosis, breast cancer, diabetes or are insulin resistant, you need to add this grain to your diet. It’s been shown to help and/or prevent those diseases! 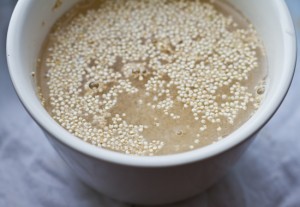 It’s important to rinse quinoa well before cooking. The pericarp is covered with saponins, a bitter substance that repels pests as well as our taste buds. Much is removed with modern production methods, but it’s still a good idea to wash the grains thoroughly.

I like to soak mine for ten minutes or so, then place in a fine mesh sieve and rinse with cold water. You’ll probably see some bubbles in the water. It’s a good idea to rub the grains together gently with your hands to help the saponins come off. When in doubt as to whether they’ve been washed away, taste a few grains. If they’re bitter, keep rinsing!

If you’re concerned about phytates, you can soak quinoa overnight (or for at least eight hours). Adding a probiotic liquid will further aid in reducing phytic acid for optimum digestion in those people sensitive to the compounds.

Quinoa can be cooked and eaten like rice, milled into flour, and used for hot cereal. Around here, we like it made into a summer salad with veggies, or formed into patties and pan fried in a bit of olive oil. It’s also a great addition to soups, adding some nutrition and nutty flavor.

Quinoa is great when you don’t have much time, since it cooks up in 15-20 minutes. No more excuses that you’re ordering fast food because you’re pressed for time; this little gem is ready faster than Pizza Hut can get to your door! 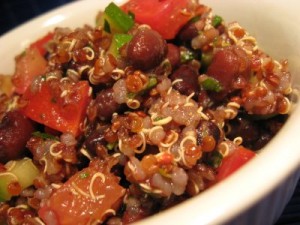 I love quinoa just about any way it’s prepared, but here are some of our family favorites. The black bean salad recipe is great to take to potlucks and picnics, since it’s served room temperature and doesn’t contain dairy to spoil. It’s also a great way to introduce people to quinoa!

If you like rice pudding, try this quinoa variety! It’s fast, easy, and super nutritious. It’s a perfect autumn treat when you want something warm and comforting. I like to add a few currants or dried cranberries to mine, and some chia is always a great choice for added nutritional punch!

Finally, I like to make up a week’s worth of quinoa porridge for my gang. With four kids, I’m pressed for time, so I triple (or even quadruple) the recipe so we all have a quick, easy weekday breakfast ready at a moment’s notice.

Rinse quinoa in a fine sieve under cold running water until water runs clear. Put quinoa in a pot with 2 1/4 cups water. Bring to a boil, then cover and simmer 20 minutes or until water is absorbed and quinoa is tender. Fluff quinoa with a fork and transfer to a large bowl and allow to cool.

While quinoa is cooking, in a small bowl toss beans with vinegar and salt and pepper to taste. Add beans, corn, bell pepper, scallions, garlic, cayenne and coriander to the quinoa. Toss well.

In a small bowl whisk together lime juice, salt, cumin and add oil in a stream while whisking. Drizzle over salad and toss well with salt and pepper. Salad may be made a day ahead and refrigerated, covered. Bring to room temperature before serving. Makes 8 servings.

Rinse and drain the quinoa. Bring water and quinoa to a boil in a saucepan over high heat, stirring occasionally. Reduce heat, cover, and simmer for 15 minutes. Remove from the heat.
Blend together the milk, bananas, honey, and salt in the bowl of a blender or food processor until smooth. Pour the milk mixture into the saucepan with the quinoa.
Place the pan over medium heat. Cook and stir until the mixture becomes thick and creamy, 5 to 10 minutes.

Remove from the heat. Stir in the butter and vanilla and serve warm. May top with a bit of cinnamon or dried fruit (yum)!

Heat a saucepan over medium heat and measure in the quinoa. Season with cinnamon and cook until toasted, stirring frequently, about 3 minutes. Pour in the almond milk, water and vanilla and stir in the brown sugar and salt.

Bring to a boil, then cook over low heat until the porridge is thick and grains are tender, about 25 minutes. Add more water if needed if the liquid has dried up before it finishes cooking. Stir occasionally, especially at the end, to prevent burning. I add chopped apples and sliced almonds for texture and interest!

Well, that’s about it for this edition of Grains of Truth. I hope you’ll come back next week as we explore yet another exotic alternative to wheat, rice, and corn. After all, a diverse diet is important for optimum nutrition, and it keeps us from getting bored.

Whether you’re serving quinoa on cold mornings or steamy summer nights, it’s the perfect year-round choice for good nutrition, great taste, and total satiety. Give it a try!