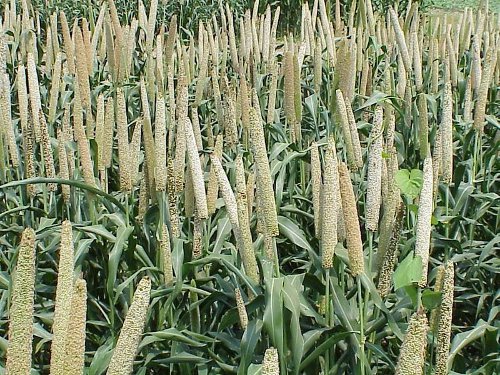 Whether you’re looking to avoid wheat because of allergies, or want to broaden your culinary horizons, there are some amazing choices for you. I’ve got some favorite grains that seem exotic but are really accessible, relatively inexpensive, and seriously delicious. Kicking off the series, we’re starting with millet. 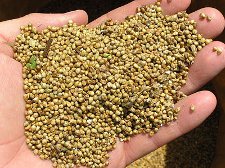 I’d be willing to bet that most of you who are familiar with millet know that it’s for the birds. That is, it’s a major component in bird seed. In fact, even though it’s treated as a culinary grain, millet is indeed a tiny round seed. It is usually white to slightly yellow. It comes in gray and red varieties as well, but they’re less commonly seen.

Millet is believed to have originated in Ethiopia, where it has been used since ancient times. It has long been used in China and India, and then migrated to Eastern Europe. Indian roti, a delicious flat bread, is traditionally made from ground millet. Before corn and potatoes were introduced in Europe, millet was considered a staple.

In the United States and modern day Europe, millet is traditionally used to feed livestock, but is gaining popularity for human consumption in the wake of greater nutritional understanding and the search for gluten-free alternatives.

You can buy millet either hulled or whole. I prefer hulled, as most recipes will call for it in that form. It’s extremely versatile and, depending on the cooking method, can be crunchy and nutty or smooth and creamy.

Millet is a good source of minerals, including manganese, magnesium, and phosphorus. If these sound familiar, that’s because they’re key nutrients in many of the seeds we talked about in the Sowing Seeds of Good Health series. When we remember that millet is a seed instead of a grain, this makes perfect sense!

Magnesium is important for asthmatics, as it can reduce the severity of attacks, and for migraine sufferers by decreasing the frequency of headaches. Magnesium also helps reduce high blood pressure, and helps reduce the risk of type 2 diabetes.

Phosphorus helps build strong bones and allows tissues to repair themselves more efficiently. Another great benefit of eating millet is the presence of plant lignans. Flax and sesame seeds are best known for their heart-protecting presence, but millet is also a great source. 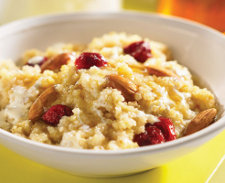 Personally I like to use millet in place of oats for a wholesome hot breakfast cereal. Just add one cup of millet to two cups of water (if you like it firmer) or two and a half cups water (if you prefer a softer texture) and bring to a boil. Turn down to a simmer, cover, and cook until all the water is absorbed, 20-25 minutes.

Millet is wonderful in muffins and quick breads, especially for people who are allergic to nuts. It adds a nutty crunch which is easily accentuated by toasting the millet lightly in a pan before folding it into your recipe. You can also grind it use millet flour to replace up to half the wheat flour in your recipes.

If you’re looking for a whole grain alternative to couscous, look no further. Instead of cooking your millet in water like you do for breakfast cereal, cook it in broth. Then you can treat it like couscous in just about any recipe. One of the cool aspects of millet is that it doesn’t get mushy like the tiny pasta pieces that comprise couscous, meaning you can make your recipe further in advance. 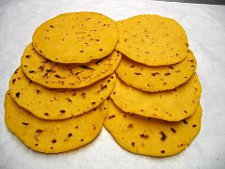 Heat 3/4 cup water with salt. When it has become warm, add it to flour. Mix it immediately. Add sesame seeds and mix into dough. Take a ball of dough and roll it into a big circle with the help of rolling pin. Dust the rolling board with enough dry flour to help in rolling. Roast it on a hot tava or griddle. Apply ghee or butter.

Toast pine nuts with or without oil until they start to change color.  Add millet and stir together for about 30 to 45 seconds. Add remaining ingredients and bring water to a boil.  Lower heat to a simmer and cook for 15 minutes or until water is absorbed.

In saucepan, cover the millet with the water and a pinch of salt. Bring to the boil, then lower heat, cover and simmer for about 20 minutes, by which time the water should be absorbed and the millet tender.

Meanwhile, chop the onion and saute in liquid of choice for about 3 minutes. Lower heat and add the cumin, oregano, garlic salt and chili powder. Stir well for a minute or so.

Drain and rinse the beans. Add to the saucepan and stir for a minute or so longer. Add the water and tomato paste. Raise heat, bring to the boil, then lower heat and simmer uncovered for about 5 minutes. Add the cooked millet to the beans, stir well, and cook for a minute or two longer, then serve.
I hope you’ve  discovered at least a few reasons to give this tiny, power-packed grain a try. Whatever your motivation in trying it, you’re sure to reap the benefits of both the sweet, nutty flavor and better health as a result.

Great taste that’s great for you — what could be better than that?