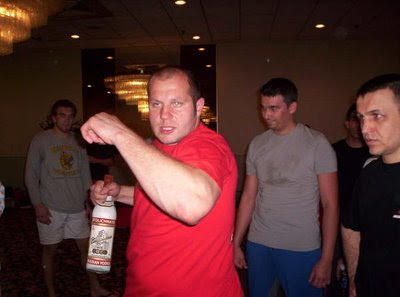 Here is a man that you don’t want to play tough guy with after you’ve had a little liquid courage.  Talk about picking on the wrong guy.  Fedor Emelianenko could whip the average man’s ass in approximately 3.5 seconds.  Under the influence, maybe 5 seconds.  Big mistake!

Fedor on the other hand, could probably do pretty good picking on people after he had a few cocktails, or a whole bottle of Stoli.  Drunk, Fedor could probably still whip most peoples asses in a one on one fight situation. I’m not saying that if Andrei Arlovski was sober and Fedor was sloshed that Fedor would still win, I am just saying that the average 250 lb guy, out for a drink with his buddies, would have a hell of a time beating up on a drunken Fedor.