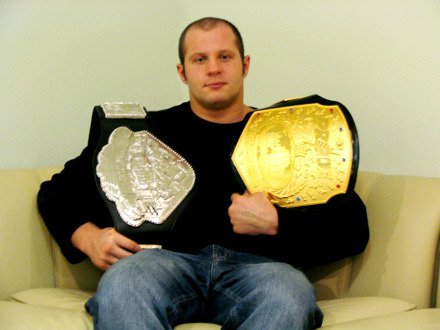 Rumors have been flying about Fedor Emelianenko and his management, M1-Global striking a deal with the UFC.  Sherdog, had a chance to sit down with both Fedor and Vadim Finkelstein to discuss their recent talks with the UFC.  The interviews revealed two things that are very telling of where M1-Global stands in regards to managing Fedor.

The first thing is that Fedor only has 3 fights left on his contract with M1-Global.  With that said, I would assume that M1-Global is being very cautious about what kinds of situations they put Fedor in.  If you were managing the best pound for pound fighter in the world, you would want to make sure that fighter keeps you as their manager.  This, whether expressed by M1-Global or not, is likely to be one of their biggest concerns while discussing contracts with other fight promotions.  M1-Global is looking for a play that doesn’t require them to throw away their ace card (Fedor).

The second thing is that M1-Global is looking for deals that will leave the door open for them in the future and is not just about making a quick buck.  In other words they want to make sure Fedor can continue to have opportunities to fight and make money well into the future.  By entering into a contract that is too binding with one organization, such as the UFC, it could limit or even destroy Fedor’s marketability in the future.  We all know how controlling the UFC is with it’s fighters.  It is likely that M1-Global is doing their best to not subject themselves or Fedor to those kind of limitations. It seems M1-Global is doing their best to make sure Fedor Emlianenko’s brand will continue to be independently popular, rather than lumping the Fedor brand in as a part of another organization where it can be diluted.

While most MMA fans want Fedor to go into the UFC more than anything.  You have to respect Fedor and his management for holding their ground and doing what is best for them.  After all there is more to MMA than Fedor vs Lesnar.  There are lots of other great fighters in the world that would make for an interesting fight with Fedor.  At the end of the day, whether Fedor is in the UFC or some other fight promotion, the chances are that you will want to tune in to watch.