College Football Gets An “Expansion” Workout

College Football Gets An “Expansion” Workout 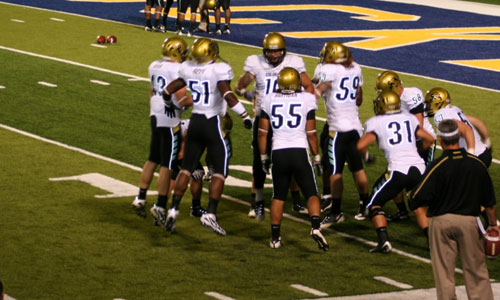 I know many of you on SteroidsLive are trying to “bulk up,” but I had no idea that college football was getting in on the trend! This “workout” involves Colorado’s announcement that they are accepting an invitation to join the Pac-10.

There are 5 other schools in the Big 12 that are also rumored targets of the Pac-10: Texas, Texas Tech, Texas A&M, Oklahoma and Oklahoma State.

When Scott was asked about the  five-school group from the Big-12 South Division, he replied, “There are no assurances. No invitations have been issued.” However, now we’re left to wonder.

Is the Pac 10 just trying to lose a little weight for “beach season”—and pick up enough teams to have a conference title game? Or is the Pac-10 trying to bulk up for a “bodybuilding show”—becoming the Pac-14 or 16?  Or perhaps there’s a deeper agenda.

Meanwhile, it looks like Nebraska will be going to the Big 10. This would leave Texas and Oklahoma alone as the “big dogs” in the Big-12. Wouldn’t Texas then want to go somewhere else? Could Oklahoma survive as the “only dog” in the “realigned Big-12″?

The consequences of Larry Scott’s “workout” will be greater than a simple expansion of Pac-10 muscle—it will cause ripple effects throughout college football.

This Makes Sense for Nebraska 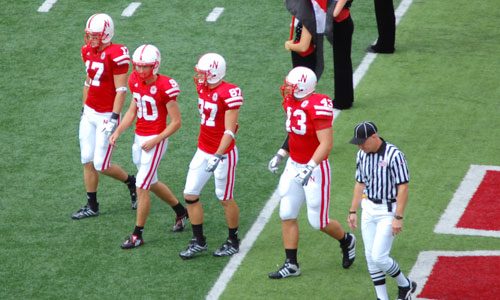 Reports have been flying for days about Nebraska heading to the Big-10. If you take everything else out of the equation, it makes sense for Nebraska. They play defense and run the ball—most teams in the Big-10 do the same thing.

Nebraska is a “midwestern” state and the Big-10 is generally considered a “midwestern conference.” Nebraska recruits a lot of “strong farm boys” and they have plenty of those in Ohio, Michigan and Pennsylvania.

The “proximity issue” doesn’t hurt Nebraska’s pocketbook either. A trip to State College to play Penn State would be a haul—but no worse than playing Missouri or even traveling to Texas.

With Colorado leaving for the Pac-10, I think Nebraska is left with no choice but to move on. Colorado/Nebraska was a pretty major game. There’s significant hatred there.

I know that Bill McCartney just “decided” that Nebraska was Colorado’s rival back in the 80′s. It was a good training exercise for the Buffaloes to stay motivated, but the games have usually gone to Nebraska.

However, when Colorado wins, it really stings the Cornhusker Nation. Colorado’s willingness to walk away from that rivalry opens the door for Nebraska to do the same with the Big-12. Who doesn’t want to spoil another team’s season the way Colorado can with Nebraska?

Add to that Nebraska’s loss in the Big 12 Championship Game—where it seemed that Texas was given an extra second to kick their game-winning Field Goal—and Nebraska is really stinging.

What Happens if the Big 12 Has a “Mass Exodus”?

Let’s say that Larry Scott is a genius and he gets 6 teams to come to the Pac-10—forming the Pac-16.  This leaves the Big-12 with the possibility of having only 6 teams. What are they going to do?

Raid other conferences, of course!

There are some obvious targets for the “newly depleted” Big-12. They are going to have to go on their own training program to “bulk up” again.

Big-12 Commissioner Dan Beebe has said he’s “comfortable” about the Big 12 staying together. Yet just last week he was quoted by the AP as saying: “We have described the fact that we have a great conference that has provided a lot of benefit to all our institutions.  I think we have a tremendous group of institutions that have benefited greatly [from the Big 12].”

He then went on to say:  “I would be negligent if I wasn’t looking at what possibilities there are for any scenario that might exist. We’re not doing anything outward . . .”  That’s code for, “We’ll raid another conference if we have to, but I’m not going to come out and say that.”

Because the Big 12 is in a high state of flux, they will be prone to taking anybody. This means recruiting schools like Boise State, Fresno State, TCU, Utah or even BYU.

Here’s the problem—it really became a competition. In the same way that bodybuilders try to exhibit every muscle on their body, the Big-12 and Pac-10 will be fighting to show the same muscle.

Larry Scott may not get 6 teams from the Big-12. Plus, Boise State, Utah, BYU and Fresno State are in very nice proximity to the Pac-10. These two conference are possibly now competing for the same schools–and competing with the Mountain West Conference who just picked up Boise State.

This isn’t guaranteed to happen since we only have a confirmed invitation for Colorado—which they have accepted. But wouldn’t it be fun—in a Presidential campaign way—to watch these two conferences fight for the same teams?

Would a Major Conference Dissolve?

I feel like I’m driving my kids home from Disney World and one calls out from the back, “Dad, Susie says she’s going to poke my eye out.” My natural response is, “No one is going to poke anybody’s eye out!”

It’s the same situation here. No major conference is going to dissolve is the midst of the “Pac-10 vs. Big-12 Bodybuilding Showdown.” If the Big-12 needs more teams, it will find them.

ESPN’s Joe Schad is reporting that Texas, Texas Tech, Oklahoma, and Oklahoma State may be prepared to leave the Big-12 early next week.  Texas A&M has called an emergency meeting of their Board of Regents.

All this means that Larry Scott wins the 1st round with the Big-12.  This doesn’t necessarily mean the Big-12 will die or that other conference need to get nervous.

Here’s my philosophy: Let them kill each other. Just stand back and watch while the cannons are fired. A conference like the ACC formed an ad-hoc committee to discuss expansion this spring—for no reason.

If the Big-12/Pac-10 each bulk up for their “showdown,” that does not mean that the ACC has to respond in-kind. However, reports have surfaced that the Big East could dissolve if the ACC raids them again.

This would mean that the ACC would have to get: West Virginia, Connecticut and Syracuse.  Perhaps Rutgers and Pitt go to the Big-10.

Now all the Big East has to do is raid Conference-USA again and it does the same to some smaller conference. I could make this column 4,000 words and go through the “domino effect,” but you get the idea.

That still leaves one question . . .

Why Make a Move “Just Because”? 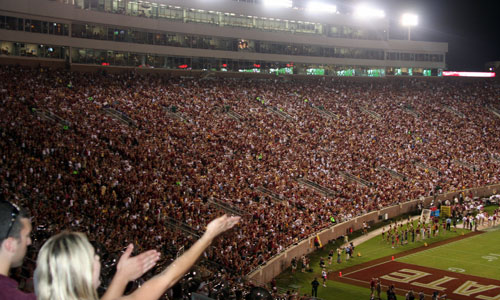 If the philosophy is, “Let them kill each other,” why wouldn’t the ACC just sit back and let those westerners kill each other? Do they really think the Big-12 is going to invite Florida State or Miami? What kind of sense would that make?

You don’t make a move “just because.” There is no open threat to the ACC or the SEC. In fact, you could say that the ACC is out of the “line of fire.” You can’t run an organization by reacting to everyone else.

If these other conferences are trying to be “super” then this only leads to a playoff instead of the BCS deciding who the national football champion is. However, not everyone has to be super.

Because the Big-10 and Pac-10 would expand the “SEC-like” powers, there would be 3 teams with a legitimate claim to the national title. That might be enough to push a “playoff system” into existence.

ACC expansion would simply create the “4th leg” in that table—but the table may already be set for a playoff whether the ACC moves or not.

This means that the only reason for the ACC to expand is pressure from the other “wannabe supers.”  The other “big dogs” want this money bad—bad enough to pressure other conferences.

The biggest proponent of a playoff—right now—is Jim Delaney, the Big-10 Commissioner.

While the Pac-10 and Big-12 workout, the Big-10 is standing in the corner talking to the ACC. “We can have all of that and more—if you’ll trust me.”

Can anyone say, “Peer pressure”?