World-Pharma.org—Full of Marketing Strategies and Lies

World-Pharma.org—Full of Marketing Strategies and Lies

Shakespeare said it best, “What’s in a name?”

It’s important to state from the beginning that I decided to write this article as a regular consumer. I do not have an affiliation with any lab or company. I do have an innate sense of what is right and what is wrong, and I feel so frustrated when companies think the rest of us are so ignorant that can try to sell us a bill of goods and we will lap it up simply because they said so.

What am I writing about? World Pharma of course. Read on and see what is provoking me and many others to revolt against this deceitful company.

World-Pharma is playing a game with the uneducated buyer searching for “top-quality steroids.” They are using the old British Dragon name, along with claims that they also carry an “FDA, WHO, GMP approved” Asia Pharma to get their way.

Sadly, it is through complete fabrication and the use of paradox information that keeps World-Pharma.org operational and thriving. Lets start by taking a look at the “new” British Dragon.

The new British Dragon being produced is not related to the old British Dragon. It is just a new UGL that has purchased the rights to use BD’s large and once highly reputable name.

According to an  article on steroidslive.com, the new line is sub-par and until this point has shown itself to be lower in quality than the old BD. Obviously, World-Pharma came in and saw a business opportunity to produce the British Dragon line in an “Underground” style, raise the price beyond reason, and justify this by calling it British Dragon.

Of course, to the uneducated consumer, this plan has worked. World-Pharma.org is becoming one of the most wealthy steroid sites around.

WP also has a banner on almost all steroid blogs including Anthony Roberts’ own blog, which, for some hypocritically bizarre reason, no longer features the posts about the new BD being sub par to the old one. Data loss maybe–this writer knows better.

World-Pharma contrives many game plans. One of them is posting their own reviews on forums using multiple user accounts. These reviews tell how “great” their products are, but the problem is—the SAME exact review appears on a WP owned or managed board.

Clearly, the author of the blog somehow has rights or permission to publish the review, leading us with no other choice to believe that they (“Pacha” on IronMag) are affiliated with WP. Now people are starting to notice.

When forum members started to ask for specifics including testing standards, printouts, or even what gear was tested—there was no reply from “Pacha” or World-Pharma on the matter.

Subsequently, the thread was locked by a moderator. Now unless you were born yesterday, anyone can see that there is something seriously fishy going on here.

Another of their tactics is attacking other major and well-known competitors, including SteroidsLive, and most recently, Napsgear. I am happy to provide citations for this—you can email me directly at [email protected] I will not help spread WP’s propaganda for obvious reasons.

This isn’t the first time WP has been caught in the act. The owner of the popular bodybuilding forum Meathedz, banned and exposed WP for some of their games. The whole article can be found here. (Note: some of the links no longer work but you can do the research yourself and find the working ones.) 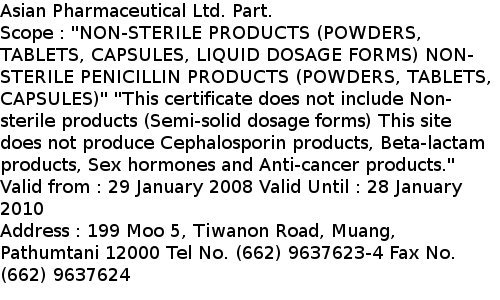 One of the biggest shams WP runs is saying (and poorly—I may add): “Dear guys as we say all the time, we sale only GMP-WHO and FDA gear and we do our best to make our customers happy!”

Now they are attempting to convince us that British Dragon is GMP-WHO and FDA approved? Any veteran steroid user knows much better than that. So let’s take a look at their other brand of product, which they charge an even more ridiculous price for—Asia Pharma.

Yes, Asia-Pharma was on the THAI FDA website as certified, but on January, 28th 2010 that certification became no longer valid. Look for yourself—#9 on the list.

Their certification specifically states: “This certificate does not include Non-sterile products (Semi-solid dosage forms). This site does not produce Cephalosporin products, Beta-lactam products, Sex hormones and Anti-cancer products.”

This means, even when they were certified, their sex hormone products–which are all steroids to any of you who are 100% clueless–were never FDA approved.

Now, World-Pharma and Asia Pharma will reference a page that looks very similar to the real Thai FDA site. Compare for yourself.

Thai FDA: (Feel free to Google “Thai FDA” and see the link yourself).

These web addresses are both different only because of the extensions, which don’t really matter. The base address does not change.

If you searched for it using Google, I’m sure you are wondering why you didn’t get a www2.~ link. Well, that’s because it is a fabricated mirror link, which means, whoever has the rights to that site, may not necessarily be the same as the www.~ site.

While writing this article, I went to the Asia Pharma website and clicked on their fake FDA link, which of course is the www2. Try the link yourself— it doesn’t even work as of 7/20/10.

Don’t you think an FDA-GMP approved lab would have a working reference link to the real FDA website? This way the consumer could check the certification. They most certainly would, but of course Asia Pharma does not—simply because they are not certified.

Asia Pharma is also the first UGL that lies about how they make their UGL gear. It is without a doubt the world’s most expensive UGL.

Here is a quote from “Bigkarch,” whom many of you know is a mod on many bodybuilding forums:

btw Pnut…I have asked several sites from asia pharma, world pharma, pharam eu etc for a pharmacy license number…I to this day have not gotten one. world pharma said (and I believe they are all related) that they talked to their attorneys and they were told not to give it to me. I call that bullshit….Ive been an attorney over 12 yrs and know better… that info has to be public and on file…and no one can find it, give it, or knows about it…so I know damn well they are not a real pharmacy..

if they are (and they arent) they will get busted soon.. thai gov (or other asian gov) and the u.s. gov work together. if usda/fda/customs/fbi/dea and whom ever find out what a AP and the others are doing by selling sending aas into the u.s. without a script or other legitimate/medical reason, they will soon get busted. and it will turn into a big sting as it has before…. that is why, other than their prices are outrageous, I will not buy, nor will I suggest anyone else to buy from them…I have been offered free gear from them and declined…they were a sponser on a source board I mod at and told the board owner of all the spamming they did and were taken off the board. they emailed the owner and said they were pissed and would put that board on every scammer list they could…

You can find more on the topic here.

Along with this, a whole new article was recently published on SteroidsLive about Asia Pharma.

A thread that tried to expose Asia Pharma for being a UGL was recently blocked by moderators on IronMagazineForums.com. I assume after my article is posted, the thread will be deleted entirely—so I have opted to save the screenshots for proof. Read it while you can.

Here are some links you can read regarding AP being a UGL:

So, as it appears, WP is not selling any GMP-WHO or FDA approved gear—despite their claims and jacked up prices.

My final thought—and hopefully yours: Why haven’t you read about this on forums or any other blogs? Well, the truth is money talks.

WP has a huge amount of control in very popular forums, like Professional Muscle, where you will get banned, and threads deleted for challenging their validity.

Could it be that WP is paying them so much money to do things like mass PM’s by the Admin (I’m sure all you ProM members got one) and to screen all posts made about WP?

They say hindsight is 20/20. Given what you have read now, all backed up by fact, it would be this writer’s warning to advise you to stay away from WP. They are nothing more than smoke and mirrors. Really there are so many other well-known and trusted suppliers out there. Why pay exhorbitant prices for substandard product. Why would you want to deal with a company that from the outset tries to deceive you? Do they really believe they are so smart…or is it that they just think that we are dumb?