Chiefs Are “Bringing In” The Chicks

Chiefs Are “Bringing In” The Chicks

The Kansas City Chiefs are a troubled franchise.  In the NFL they have sunk to the bottom of the barrel with little hope of rising to the top.

Their owner, Lamar Hunt, died and his son took over.  They fired Herm Edwards so they could have a shot at a young hotshot–Todd Haley.

They hired Scott Pioli away from the Patriots just so he could trade for Matt Cassel.  Hell, they even brought back Gunther Cunningham to coach the defense–hereafter known as the “Harbinger of Doom.”

Now they have new problems.  It seems they have someone who likes to talk.  Actually, Dwayne Bowe likes to hear his own voice.

I know I’ve mentioned this before, but don’t you think Roger Goodell brought more attention to negative press by being the “Sheriff?” Well, he’s given Dwayne Bowe a forum to open his stupid mouth.

The talk is of “importing” groupies for NFL players.  Nevermind the implications for the Chiefs, but what about the players?

This could be much bigger than a bathroom at a Milledgeville, Georgia, bar.

Bowe Claims They “Bring Them In” 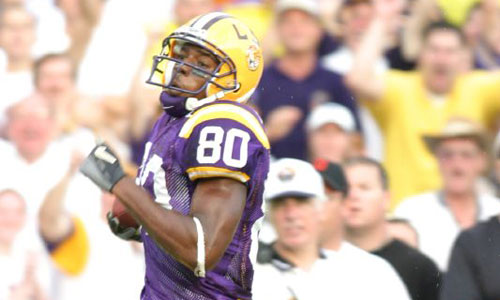 Remember “Lethal Weapon?”  When Roger goes to see his old friend Michael Huntsecker and Huntsecker tells him all about their drug operation?

Huntsecker says, “…and we’ve been bringing it in ever since.” Well, we’re not talking heroin–Dwayne Bowe’s talking women.

His claims come from an interview with ESPN The Magazine.  I still shudder at how hard it must’ve been for the interviewer to not pass out as Bowe gave them the story of a lifetime.

Some of the accusations are pretty obvious.  Players have girls in every city.  Players meet girls on Facebook and Twitter and arrange to meet them.  Players have affairs.  That isn’t scandalous–because we already figured that.

If that were the whole story we could just put Eva Longoria on the task of outing them.

Bowe also claims that players put things together for a road trip to San Diego in 2007.  He says, “some of my teammates had it set up so there was a girl in every room[of the hotel]….”

Bowe goes one step beyond that.  He says that players brought in packs of women  a couple days in advance of a game.  He even says that they’d take up whole floors of hotels housing these “traveling groupies.”

Let’s say this is true.  Let’s say that Dwayne Bowe is the “Jose Canseco” of the NFL groupie “importing” trade.

That means NFL team dollars could be spent on groupies instead of salaries, facilities, community outreach or publicity.  That means that NFL teams might be spending their money on groupies, while the owners head for a lockout?

This has HUGE implications–besides the fact that it’s completely salacious, and we wouldn’t stop talking about it for a whole year.

Fidel Goodell Will Be Coming Back

No, Fidel Goodell is wondering what in the heck he would have to do to the Chiefs if this were true.

The Patriots lost a draft pick for “Spygate,” while players, coaches and owners get fined routinely for saying things the league doesn’t like.  Pacman Jones got suspended for a whole year just for being stupid.

What do you do with a team that “allegedly” — gotta put that in there –”imports” women for their players?  At the very least they let it happen.

How do you penalize the whole organization for something just a couple people might be taking part in?

This couldn’t be as simple as the owner throwing around some cash and doing the players a “favor.” You’ve got to be organized to pull this off.

If, by some miracle, only players are bringing these women in–they’d all be suspended and fined.  That’s probably about it.

But heaven help a team that was even remotely complicit in this.  Could you imagine the PR atom bomb that would explode in their face?

NFL Security Can’t Do Its Job

I think we all know by now that the NFL has its own security department.  Lots of retired FBI and law enforcement dudes who now get paid a “pretty penny” by the league to keep teams and players safe.

When is NFL security going to have time to “secure” anything?  I can only imagine the resources required to figure out if a player is organizing for “imported” groupies at a hotel the week of a game.

That leads naturally to my next thought:  Would this be considered “Lack of Institutional Control?”  They have that definition of stupidity in the NCAA rulebook.  Doesn’t that apply here?

I’m not saying the league would take over the Chiefs, but they might put a “czar” with the Chiefs to keep them in line.  If states do it with public schools, then the NFL might do the same with their teams.

The Chiefs pay somebody millions of dollars to play football and that money is being funneled into borderline escorting/prostitution.  Fidel’s next question is surely…

How Come The Chiefs Didn’t Know About This?

Once again, this is all alleged.  There’s no way in the world players were “importing” women and somebody with the team didn’t know–hence the need for a “czar”.

This also leads to much deeper issues of corruption and collusion.

In my humble opinion, no team that has something this major going on is fit to field a football team every weekend.  I bet you anything that Fidel Goodell is just as upset about a breakdown in competition as he is about “importing.”

Maybe all the ticket holders deserve a refund for every game that’s been blown by over-indulged players.  That would be a much harsher punishment than a fine or the loss of draft picks.

If you’re going to hurt yourself competitively by not nipping this in the bud then you’ll have to give your money back instead.

How come the Chiefs didn’t know about this?  Because they didn’t want to.  Someone probably looked the other way and that will cost the team dearly.

If you’re in the Chiefs’ front office and you heard about this, you would be deathly afraid to speak up.  Instead you would just spend every sleepless night thinking of all the “worst case scenarios” if people found out.

Now People Have Found Out

Why is Bowe speaking out now?  Somebody probably pissed him off.  That person in the Chiefs’ front office who must’ve known about this–because there must be somebody–probably told them to stop.

Or, one of the players Bowe claims “imported” the women pissed him off and Bowe outed him.

I think these scenarios are likely for two reasons:

1.  Todd Haley said this was an “internal matter”

2.  Nobody else in the Chiefs’ locker room is talking.

When every player says, “No comment,” you know the team came in and asked for–in my favorite line from “The Closer”–”instant shut up.”

The Chiefs are in crisis mode and their team already sucks.  Not only did Bowe seal their fate for this season–they can’t get over the distraction–but he probably just got Haley, Pioli, and/or an assortment of Chiefs’ officials fired.

Troublemakers don’t just make their own trouble–they bring all your other troubles to light.