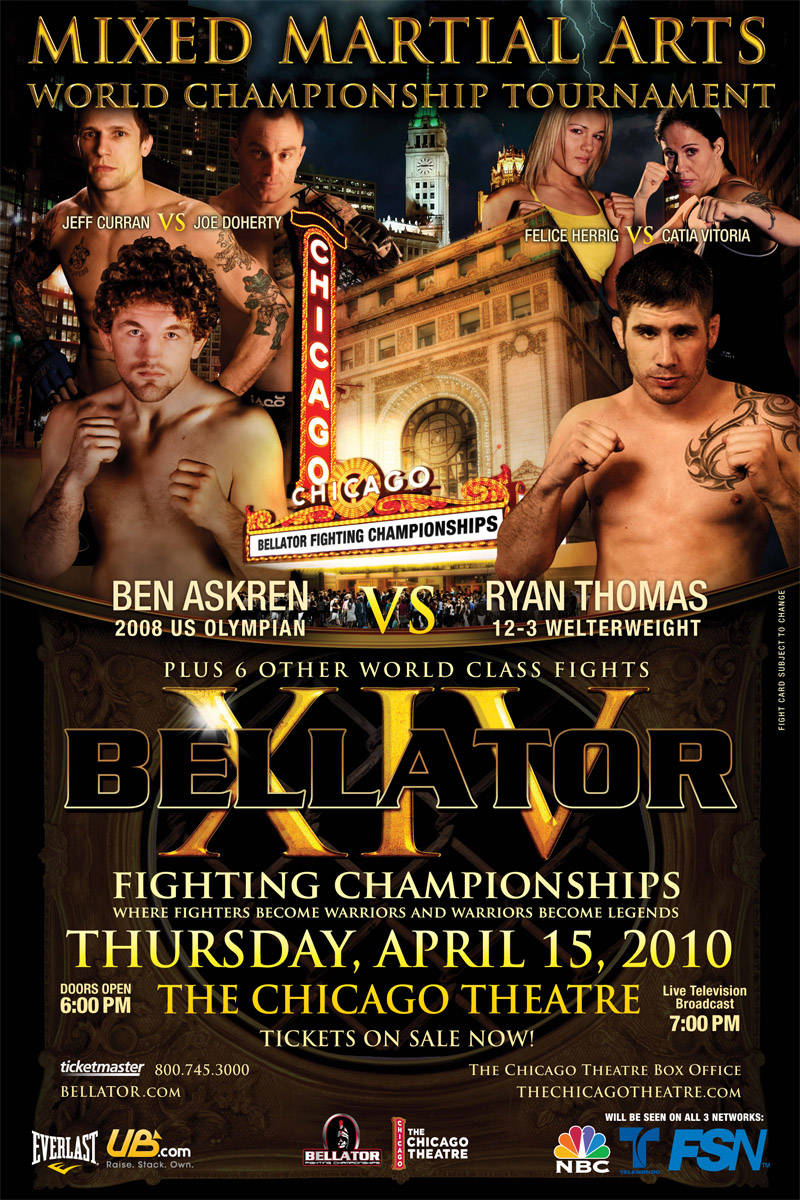 Tonight the second season of Bellator took place live in the Chicago Theater.  There were a few last minute changes, but everyone made weight and all the new fights went on as scheduled.  Thankfully there were no baseball games on FSN this time so I got to watch the event live.  It was a very entertaining night of fights, albeit it did come with a little controversy.

The first broadcasted fight of the night was a lightweight bout between Mike Ricci and Patrick Curran.  Ricci had a ton of hype coming in based on his undefeated record and more importantly, his training partner in Canada: George St. Pierre.  The fight got off to a slow start as the taller Ricci kept his distance throwing occasional kicks.  Curran progressively got more aggressive with push kicks, appeared to be finding his range and then WHAM!!!  Curran lunged forward with a straight right that hit Ricci like an anvil.  Ricci collapsed immediately and Curran pounced on him giving him a couple more punches for good measure before the referee could pull him off.  This was definitely one that will be added to the Bellator highlight reel.

I definitely didn’t expect Curran to win this fight, but he proved me wrong big time.  He is really packing some power.  Poor Mike Ricci was unconscious for a good minute or two after the fight had been stopped.

Next up was a bout between Shad Lierley and Wilson Reis.  Reis was one of the few returning competitors from last season, having lost to eventual featherweight champion Joe Soto in the semi-finals.  This bout was very action packed, opening with some heavy but very sloppy striking in the standup by both fighters.  Once the distance was closed, the real action began.  Reis is a world class Brazilian jiu jitsu fighter, but Lierley proved that a wrestler given solid submission defense is still dangerous.  Both fighters worked for position constantly sweeping each other and with Lierley using very nice technical escapes in the first two rounds.  Reis showed some incredible strength with a half guard sweep and a huge slam as well.  In the third round, Reis finally wore down his opponent and gained mount.  After a barrage of punches from mount, Lierley gave up his back and was submitted via rear naked choke.

This definitely would have won fight of the night if it had been on a UFC card.  Both fighters engaged well, with reverses and submission attempts all over the place.  Reis should be a tough man to beat in this featherweight tournament.

The first welterweight fight of the season was between ex-UFC fighter Ryan Thomas and Olympic wrestler Ben Askren.  Askren is one of the most highly touted prospects in MMA today so I was very anxious to see what he had to offer.  After a brief exchange standing, Askren went for his bread and butter, the takedown.  Once he had Thomas on his back, he was caught off guard by some very active bottom game by Thomas, who has won 7 fights by submission.  I had a feeling of deja vu when Thomas slapped on a triangle choke, just like Joe Warren last week, but Askren powered through it.  About halfway through the fight, Askren locked on a modified guillotine/anaconda/neck crank choke that looked pretty deep.  The ref got in close and stopped the fight.

This is where the controversy started.  Immediately after the fight was stopped, Thomas looked the ref square in the eyes and yelled “bullshit!”  He got to his feet and started complaining and his corner started complaining even harder.  When the announcer Jimmy Smith came in for the postfight interview, he shockingly went straight for the referee and asked him to explain himself.  The ref said that he asked Thomas to give him a sign and he wasn’t given one so he stopped the fight.  While I agree that you should always have safety first in an MMA fight, I wouldn’t be surprised if Thomas couldn’t hear the ref at all.  I’ve seen many refs pick up a fighter’s arm to see if it goes limp as a test for a technical submission ruling (Ex. Mir/Kongo) and that was something that the ref could have easily done here.  Either way, Askren moves on.  Hopefully Bellator can make it up to Thomas sometime down the road.

In the final fight of the night, Toby Imada took on James Krause in a lightweight match.  Krause was a late replacement for Ferrid Kheder, who apparently came down with appendicitis this week and had to pull out of the fight.  The announcers reported that Krause had to lose over 30 pounds this week just to make weight, and I’m sure that was going to be a factor into the fight.  In the first round, Krause used his significant height advantage to try to keep the fight at a distance and when the fight eventually did go to the ground, he did his best to stay on top.  Imada, who is widely known for his insane inverted triangle submission of the year last season, repeatedly went for submissions from the bottom but was unable to put Krause away.  In the second round, Krause was yet again on top, but he appeared to tire a bit and Imada took full advantage.  Imada latched on a weak triangle and when Krause backed out, Imada held on to his arm and locked in a nifty armbar which forced Krause to tap immediately.

Imada still has the submission magic working for him this season, I hope he can keep it alive in the semi-finals.