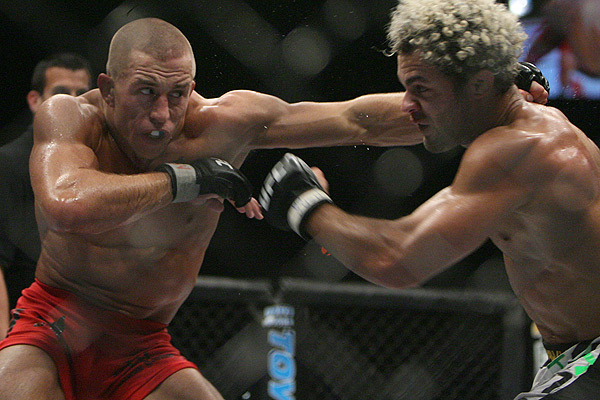 The welterweight division before GSP is another great example of the attrition method.  We had Hughes at the top, who was a dominant wrestler with a great top game that included GnP and some submissions.  He dominated pretty much everyone in the division with his wrestling.  Then the magic of evolution produced another attrition based answer:  Out wrestle the wrestler.  Out of the fog comes a primarily kickboxer that learns wrestling late, but with an eye toward how it can be best utilized in MMA and in a cage.  His name was George St-Pierre.  He then goes on to dominate using a wrestling based strategy.  That domination continues today.  He takes you down and grinds you out, just better than Matt Hughes ever did.  This worked very well for GSP because the welterweight division was full of wrestlers: Hughes, Koscheck, Fitch, Sherk (at the time), Trigg (at the thime), and the list goes on.  It was also full of guys whose game plans were very much affected by dominant wrestlers, top game BJJ guys (Penn and Serra) and strikers who wanted to stay off their backs (the most recent is Alves).  Wrestling has this awesome ability of not only dictating where the fight goes, but preventing standup guys from really unleashing their strikes for fear of the takedown.  It was a great attrition based evolutionary answer in that MMA environment, and still works great to this day.

The above examples are attrition based strategies; hit your opponent at his greatest strength.  What about an innovative or guerrilla strategy?  Well, a great example of an innovative strategy is the one used by Machida.  He doesn’t try to out-wrestle wrestlers, he doesn’t try to out-kickbox Muay Thia fighters.  He has a fight method that completely circumvents the strengths of his opponents.  His main strategy being:  Be elusive and don’t get hit.  That’s it.  He has since developed some good striking that can put people to sleep, but his main strategy is to not get hit.  It is not trying to out-do anyone in any one aspect of the fight game (although it could be argued that he is out-boxing, but he uses it on ground fighters too).  He just nullifies their strengths with his focus on damage avoidance and ends up either getting a decision, or putting his opponents to sleep (as of late).  That is a great innovative strategy, and it evolved in an environment that is heavy with guys that are good at all aspects of the fight game.  You have great strikers, great wrestlers, and great grapplers in the light heavyweight division (by far the most stacked division in the UFC).  You also have guys that are really good at multiple aspects, like Rashad, who is good at wrestling and striking.  So, the dominant method that evolved is one that nullifies all of them: don’t take any damage and stay on your feet.  In the course of a fight, if you don’t take any damage but still dish some out, you will either get the decision or possibly a finish.  It is all very nice and simple.

Now it’s back to the GSP problem.  As stated before, we have a powerful MMA wrestling method that is currently dominating.  So, there are two ways to defeat it.  First, the attrition method: Become a better wrestler and out-wrestle the current master wrestler.  The problem is I don’t see anyone doing that anytime soon.  I don’t even think there is anyone currently on that path.  There are plenty of welterweight wrestlers out there in the form of Fitch, Koscheck, and Trigg.  However, they are either not evolving into better wrestlers than GSP, or they are focused on evolving in the wrong direction; like into strikers.

So that leaves the guerrilla warfare innovative approach.  I personally believe that it is going to take a BJJ ace, and not a top game BJJ ace like Penn, but a bottom BJJ ace to beat GSP.  One of the best ways to neutralize a wrestler is to either choke him when he comes for the takedown and leaves his head vulnerable during the takedown (a guillotine choke is perfect example), or be able to pull a submission from the bottom while avoiding any damage.  I’m thinking on the lines of a high guard and good control to prevent the damage from the top coupled with an explosive fighter than can slip a triangle or arm-bar from the bottom.  Plus, if this BJJ guy is that good from the bottom, he may also be able to get a sweep and do his own damage from the top.  The innovative approach doesn’t bang it’s head against the opponent’s strength, it circumvent the strength, or uses it to it’s advantage.  A good BJJ artist with a killer bottom game would fit the bill perfectly, especially if he was tall and lanky.  In fact, I think a tall lanky body type would be a pre-requisite for this kind of fighter.

The next natural question is: “Who in the welterweight division fits that bill?”  To be quite honest, I really don’t know.  My mind tends to drift toward Mike Swick with his “swikotine” and decent standup skills to make GSP want to take him down.  However, I don’t know if he really has the bottom BJJ skills to pull it off.  He does have the lankiness though.  Dustin Hazellet or Tamden McCrory may have the skills and body type to do so, but they need to rack up some more wins to really be in the picture.  With those two, I’ll be following Hazellet the closest.

Personally, I won’t be betting against GSP again until a challenger comes about that fits one of these two fighting methods.  I won’t hold my breath for the better wrestler, but I will be looking forward to a brilliant BJJ ace with a good bottom offense (and decent standup to make GSP want to take it to the ground).   At least, that is my betting game plan for the future.

Is Tito Ortiz Leaving the UFC?
Top 10 Hottest Women of MMA
Gina Carano Finally Makes a Statement Regarding Her Loss to Cyborg
Top 10 Hottest Ring Girls Of All Time