You may have heard of the primal lifestyle lately. I’ve been writing about CrossFit and P90X over the last couple of months, and you can’t get too deep into researching either without running into talk of a primal diet and exercise pattern.

What is the primal lifestyle? While it can be difficult to pin down a precise definition, there are several common tenets. Today we’ll talk about the basics and get in-depth into the diet piece. I’ll be back next week with the exercise and movement portion. 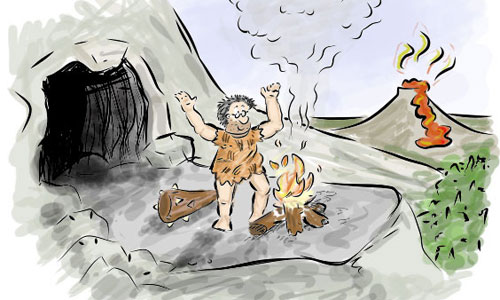 Primal is built around our archetypal caveman ancestor, Grok—a hunter-gatherer with a wife and two children. He’s lean and ripped in ways that trigger extreme envy in those of us skulking around nowadays.

Grok is said to have eaten meat, grasses, seeds, nuts, greens (leaves) and veggies, as well as roots, fruit and berries in season. Notice the conspicuous lack of grains and refined sugar.

He occasionally fasted out of necessity when times were lean. Otherwise, he ate as much as he desired of the foods available to him, including those high in fat and cholesterol.

Short bursts of cardio would have been necessary to both catch food and escape predators. He’d also need to carry heavy things regularly (i.e., strength train).

Another key component of primal living is getting enough sleep at night, as well as napping during the day. Add to that getting plenty of sunlight to increase stores of vitamin D, and you’ve got a pretty round picture of the primal way of life.

When in doubt, we’re supposed to ask ourselves, “What Would Grok Do?” After all, he’s our example of healthy living!

Atkins vs. Paleo vs. Primal

These diets look the same in broad brush—keep carbs to a minimum and eat lots of protein and fat. It’s easy to confuse them.

The Paleo Diet suggests that people focus on meat and vegetables, but limit intake of saturated fats. It also allows artificial sugars when a person truly feels the need for a treat.

Atkins allows you to eat as much as you like, so long as carbs are kept extremely low. Dairy is fine, as are artificial sugars. It’s fine to eat grains within acceptable daily levels, and processed foods are ok so long as you stick to macro percentages in the diet.

Primal goes a bit further. Here, saturated fats are fine, especially nutrient-dense organ meats. There is a serious focus on maintaining proper insulin levels and controlling blood sugar. Carbs can be at least as low as with Atkins, but dairy is eschewed and only natural, unprocessed foods are ok.

The idea in the primal diet is to limit your carbs “to only those you need to provide glucose for the brain and for some reasonable amount (certainly less than an hour) of occasional anaerobic exercise.”

The Issue of Grains

Mark Sisson, author of The Primal Blueprint, says, “But, as countless archaeological findings suggest, people became smaller and frailer as a result of this new agrarian, grain-fed existence.”  This is where things get interesting to me—when I sat up and took notice of this lifestyle.

In Born to Run, the research presented theorizes that neanderthal died out and homo sapien survived because, though smaller and more frail (to use Sisson’s words), homo sapien was able to run to kill his prey as the animals tired and eventually collapsed.

Sisson says that we became weak due to agrarian living, whereas Born to Run says that we survived because we could run. What an interesting intersection of evolutionary beliefs!

The Tarahumara are a modern day tribe indigenous to northern Mexico, who still practice this traditional lifestyle. They live to be at least twice as old as neanderthal and still run tribal and inter tribal races. They live mostly on corn and beans, which begs the question: Are grains the culprit for the weakness and obesity in today’s society?

In many parts of the world rice accounts for over half the dietary calories—many times up to 80% of a person’s diet. I don’t believe it to be a coincidence that those are also some of the longest-living cultures on the planet.

As for strength, Asian cultures have given us some of the most well-rounded athletes the world has ever seen in the form of martial artists. Fast, strong, capable—wouldn’t those traits make more sense for survival than brute strength and massive size?

Before you get all up in arms, I’m not against bodybuilding. I lift hardcore myself when I’m not pregnant, and I love the look of sleek muscles. We’re also not trying to outpace mastodons much nowadays, or trying to spear a wily bison.

When talking about evolution, it makes more sense to look forward rather than back; to become smaller and fit the environment we have versus taking up space the world is quickly lacking due to population size and scarcity of food.

Is Primal Possible the World Over?

We have to ask the question, would this lifestyle be possible for the world’s population the way it supposedly once was? Perhaps in the times of cavemen there was enough to go around. But now, with six billion mouths to feed, I highly doubt that there’s enough meat to make it possible for everyone to eat this way if they so desired.

Of course, not everyone will want to base their diet around animal protein and fat, and I fully understand the concepts of both personal choice and food availability. However, I do not believe that it would be possible to allow everyone on the planet to eat this way.

Again, when we come to the question of evolution, doesn’t it make more sense to find a system that keeps us lean and fit without sacrificing the percentage of the population that’s unable to be accommodated by such a diet?

Of course, this doesn’t address the question of whether we have the desire to feed the whole world or maintain survival of the fittest. Clearly, that is a question that can only be answered individually, in accordance with a person’s beliefs.

Do I Agree with the Primal Diet?

Well, not entirely. I think it depends in large part on your world view—how long you think humans have been walking as homo sapiens, and why we survived when neanderthal didn’t.

For example, if you’re a young-Earth creationist and your Bible says bread is the staff of life, you’re not likely going to discount grain as a beneficial source of nutrition. Most biblical scholars believe that everyone who lived before the flood were vegetarians, not having been given permission to eat flesh yet.

Now, if you’re an old-Earth evolutionist, you’ll certainly see the value in living as our stronger ancestors did. Is the lifestyle applicable, though? Since the average lifespan of the caveman was approximately half our life expectancy, does vibrant health translate to the extra decades?

So what do we want?  Do we want to be like the species that didn’t survive?!

There’s not one way to live that works for everyone. I’ve seen some incredibly ripped, raw vegans, and some amazingly cut primalists. So while I think that there’s value in this—eating clean meat, being careful to go with organic and getting enough sleep—I don’t fully buy into it.

However, I certainly applaud the focus on grass-fed meats and making use of the organs, as well as buying organic foods to keep ourselves as healthy as possible, no matter if our life expectancy is 30 or 130 years.

Interested?  You may be interested in a 30-day primal living challenge. If you want to try the lifestyle but don’t want to make a commitment, why not give it a one-month trial?  You may just find that this is the lifestyle you’ve been looking for. And if not, you’re one step closer to the thing that is!