The Grass Is Always Greener

The Grass Is Always Greener

Corn evokes images of midwestern values, amber waves and hardworking farmers.  It’s too bad that a grain so average in nutrition is the primary source of nutrition for most meat and eggs.

There are some scary things going on in the food industry. They’re big, they’re powerful, and they’re controlling what most of America (and because of America’s influence, what a large part of the industrialized world) eats.

They hybridize crops for the best yield, genetically modify our food and don’t have to tell us, and hide their product in almost everything on grocery store shelves.

And you know what? Because of our drive for wanting bigger, cheaper, faster meals, we buy it. You can stop the madness. You can get your family off of grain-fed meat and poultry.

Money Makes the World Go ‘Round

I’m all about buying something that’s better for me, my family, and the world, but I have to bank some pretty serious benefits to pay triple the price per pound for meat.

As I mentioned in

1.  The diets of feedlot animals are designed to fatten them as much as possible in a short time. In Food, Inc., we see that many farmed chickens can no longer walk before slaughter because their breast size causes them to topple forward.

2. Feeding grain to cows causes them such enormous amounts of gas in their rumens that they can start to press on the lungs. If unable to expel this gas, they can actually suffocate. Now that’s some seriously painful bloating.

3. If suffocation isn’t bad enough, their diets can also cause sub acute acidosis (basically heartburn), which can lead to diarrhea, ulcers, abscessed liver and death.

4. Since we can’t measure the emotions of animals on a scale, it’s difficult to say what living in a confined space feels like for them. It only makes sense that animals who are allowed to be out of doors the way they were designed to be are more comfortable, feeling the sun and eating a natural diet.

5. Pastured animals aren’t usually subject to cruel practices such as dehorning, castration and branding, normally without the benefit of pain relief. 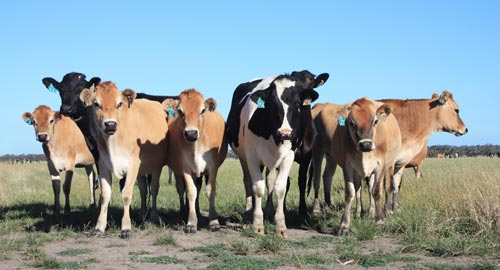 1. Feedlot animals are routinely given antibiotics as part of their diets. In an age where we’re seeing antibiotic resistance and the scary advent of superbacteria, nearly 70 percent of feedlot cows are drugged this way.

2. In 2004, the veal industry was found guilty of giving growth hormones to 90 percent of U.S. calves to help them get big fast.  Last century, animals sent to slaughter were four to five years old. Today, they’re a mere 14 to 20 months.

1. The EPA states that feedlot cattle are responsible for producing over 250 million pounds of manure per year, which then contaminates our water supply. Pastured cattle’s manure is almost always worked back into the land, and the “circle of life” continues (and it’s free and organic).

2. Pasturing can make nearly barren areas fertile. Because of rumination, the cows regurgitate grass seed, which is then spread to other areas when the wind blows or the cows track it on their hooves. This removes CO2 from the air, and some studies suggest that grassland removes more than trees.

3. Each feedlot steer is said to require about 300 gallons of fossil fuel in his lifetime for grain production, transport, processing and waste removal, which is significantly more than animals who are not fed petroleum-based pesticide-laden corn.

4. Growing corn and soy (half of which goes to livestock production) causes six times the top soil erosion of pasturing. By contrast, pasture can gain an inch of topsoil because cows are working the land much like the bison did in the great plains to make it fertile farmland generations ago.

What can I Do?

Choose organic. It’s non-GMO, in addition to the lack of pesticides, hormones and chemicals.

We’ve switched to grass-fed, organic meat that never spent a day on a feed lot. I have had a hard time finding local beef that’s less than $8/lb and, in the meantime, have been buying 85/15 beef from Target for $5/lb.

I realize that’s more than twice as expensive the alternative at the grocery store. It’s a price I’m willing to pay for my family’s health.