Image is a big deal in sports. The NFL works tirelessly to make sure its image is squeaky clean (to no avail).

NBA stars want to have “street cred” — but not too much. NHL players want to be tough. Baseball players want everyone to think they work hard — even when they don’t.

Here are the image levels:

1. Players who want to look a certain way — and hope it works.

2. The leagues’ and owners’ desire to NOT look like “fat cats” even — though they are.

3. The secret society of people who work to destroy images, “slowly, but surely.”

It’s this third level of image I want to talk about. Sports is filled with beefs and arguments — confrontations — locker room fist fights. Sports has every kind of anger you can imagine.

Where does all this anger and confrontation come from? Does it come from some inner desire for all men to compare penis size?  That’s part of it, but I think it’s even bigger than that.

This goes far beyond Kobe telling the cops in Colorado that Shaq had women on the side. This is much bigger than Eric Mangini starting the “SpyGate” investigation.

This is even bigger than a near gunfight in the Washington Wizards locker room.

I firmly believe that there are people in the NFL — team employees, hangers-on, groupies, and such — who make it their entire job to create trouble.

This secret society — which I will refer to as SNITCH (The Society Now Intentionally Titled to Create Hostility) — exists to make life difficult for certain teams and players.

SNITCH is a band of people who find the ears of star players. Some of them have the confidence of owners and executives.  Others simply watch from a distance — playing an advanced version of “Telephone.”

As information flows towards players and owners, people are either assigned, or they choose, to make a play for someone’s attention. Then, they start a rumor, hint at a rumor or make light of something that should be private.

Many teams like to handle their business “in house.”  Those few teams are immune to SNITCH. Basically, in a place like New England or New York, you “keep it to yourself or die.”

An “insider” told Mediatakeout.com that Kenyon Martin and his rapper girlfriend, Trina, are having a “commitment ceremony” on the same day as Carmelo Anthony’s wedding.

First, K-Mart says that this is completely untrue, “There is no truth to recent media reports about me having a commitment ceremony on July 10, 2010, or any other date. I will be attending my teammate’s wedding on July 10, 2010.”

He even went on to drive the point home. “I have not responded to several other untrue claims about me on the Internet, but I felt I had no choice because this was involving my teammate’s wedding date.”

Now, this has nothing to do with the playoffs since the Nuggets have long since been eliminated. This has to do with direct conflict between Melo and K-Mart.

If you’re a SNITCH operative you run this rumor out there hoping that a jumpy K-Mart will hold a grudge against Melo for dragging him into the media with his wedding.

You’re also hoping that Melo will stop trusting K-Mart because — he already knows K-Mart is crazy, and K-Mart messed with his wedding.

The mission was simple. Find two teammates who could easily “beef.” Choose a team with a sick head coach — George Karl has cancer — for added effect.

It’s bound to start something.

What About LeBron’s Mom? 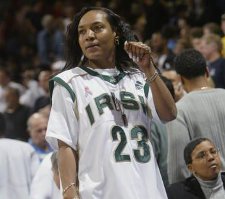 The first thing I heard about the rumored affair involving LeBron James’ mom and Delonte West was on the radio. The “2 Live Stews” — syndicated on Sporting News out of Atlanta’s 790 The Zone – -were joking about Delonte West being at LeBron’s house.

I found the idea of Delonte cooking eggs in the nude in LeBron’s kitchen especially funny, but it’s all a rumor. I think SNITCH is behind this.

LeBron already distrusts most of his team. He’s upset that Shaq and Antawn messed everything up by not contributing enough to a title run.

If I’m a SNITCH operative, I’m totally running with this one, but I’m telling someone with the Cavs. Let LeBron find out about it the same time a disgruntled teammate goes to the press.

The rumors came out during the Eastern Conference Semi-Finals. Do we think this effected LeBron’s play? He certainly wasn’t “all there” during Games 5 and 6 against Boston.

Perhaps a SNITCH operative working for the Celtics started this one? It’s either that, or Shaq — because Shaq’s an asshole. But I think it’s a Boston SNITCH agent.

Whether the rumors are completely untrue or not — there’s no way LeBron could have played well wondering if his mom was boinking Delonte West.

What are the Implications?

LeBron James missed out on making the NBA Finals because he was distracted by a SNITCH rumor? The Nuggets fall apart around their cancer-stricken coach because Melo and K-Mart are beefing over wedding dates?

The Kobe/Shaq Lakers crumbled after a SNITCH agent leaked Kobe’s comments to the Colorado police — causing Shaq to ask Kobe.“Tell me how my ass taste.”

The Pittsburgh Steelers got ruined when a SNITCH agent suggested to Ocmulgee District Attorney, Fred Bright, that leaking facts to the press was a good idea.

We hear rumors and they go in one ear and out the other, but these players and owners take everything to heart. Each one is just a mind ready to inhabit with scandalous talk. That’s how SNITCH operates.

Can you go through your team’s history and find a time when you thought your team just got screwed — and now you realize SNITCH was at work? I know I can…

But I won’t tell. I’m already looking over my shoulder. Does SNITCH know where I live?  I’ve said too much!t.