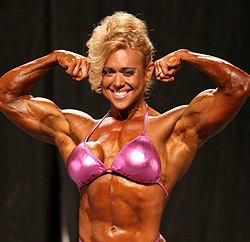 Many women believe in fallacies about gym workouts, such as the following one: once a woman starts doing some weight lifting, she immediately turns into a competition standard bodybuilder. Such image scares the females away from the gyms long before they get a chance to experience the beauty of those trainings. Before you decide to go into bodybuilding, you need to know the true story about this sport. Let’s explode the common myths about the female bodybuilding.

It is impossible from the physiological point of view; female body produces ten or even hundred times less hormone responsible for the muscle mass gain, testosterone, than a male body does. Thus to become extremely masculine, you would have to be born with the male chromosomes dominating in your body or completely change your hormonal state and work out like crazy at the same time. “Natural”, or non-stimulant, bodybuilding can not give such results simply since it is physically impossible to build such a mass of muscles.

Such belief is simply a misunderstood conception of conditioned bodybuilding. Surely, serious correction of the body structure is impossible without building up some muscle mass in the under-built areas; but we are talking here about correction that is not intended to exceed natural proportions. Competent training will never harm your figure’s grace. Muscles can be sculpted to be well-formed and in-tone, rather than blankly massive.

Aerobic Trainings, Rather than Weightlifting, Improve the Figure

Aerobic workouts are great for you, there is no doubt about that; those trainings improve the effectiveness of the cardiovascular and the respiratory systems, boost the metabolism, help shed the excessive fat. Those workouts, however, are not capable of building up the muscles, so that if you need to add mass in some areas, aerobics is of no help here. Moreover, overdoing it with the aerobics can sometimes make the muscles flabby; muscles get in tone due to the development of the fibers responsible for speed-strength qualities, not endurance. Hence, aerobic exercises can help you only at getting rid of the excess fat, once you are done with that, start doing some weightlifting.

Muscles Will Turn into Fat Once You Stop Practicing the Weightlifting

Let’s start with the fact that muscles can not turn into fat, as much as an apple can not become an orange, or the heart can not suddenly transform into the liver. Those tissues of the human body have completely different structure and functions. Fat is passive and stores unnecessary, extra energy received by the organism due to unhealthy nutrition style. Muscles are active in terms of metabolism, they consume part of the energy, which would otherwise be stored as fat in case of physical inactivity Moreover, once you stop the trainings the muscles will simply shrink in size as they receive no extra stimulus then; fat, on the other hand, results from a wrong approach to the daily nutrition.

To Get Fit Do a Little of Repetitions with Light Weights

Once you go over 10-12 repetitions, you start working with the muscle fibers responsible for the muscle durability rather than the tone, strength, let alone the mass. Hence, you no longer train the muscles which are cut out to build beautiful complexion. Undoubtedly, light weights and few repetitions do have their own part in female conditioned bodybuilding, but this approach must be properly introduced at a certain stage of a half-a-year or a year-long training. What makes you slim is not the training with light weights, but a correct diet and carefully chosen aerobic exercises scheme.

Train a Lot and Often in Order to Improve the Complexion

Three-four trainings a week are enough to obtain a slender figure, elastic muscles, and reasonable level of body fat. Overly frequent and intensive training overtrain the body, its hormones are used up to their limit and the female gets easily tired from doing the weightlifting rather than from aerobics; hence, no muscle mass is gained and the hopes for a well-built complexion are ruined.

Equipment-based Training Can Add Volume to the Breasts

Quite the opposite, intensive training, especially the one directed to shed the extra fat, will down-size the breasts, which consist of the glandular and fatty tissues. Weight training can not enlarge the fatty tissues; hence it is of no help at boosting the bosom. Weightlifting, however, can shape the muscles lying under the mammal glands – the pectoral muscles. Well-planned trainings can lift up the breasts, visually improve their shape, and straighten the posture. Namely those changes should be your ultimate training goal.