Most of you don’t know it but April Fools is my favorite holiday each year.  I posted an April Fools joke article this past Thursday as a fanpost on MMAforreal.com and it garnered a little steam.  I had so much fun with it that I’ve decided to share it with you here.  Just remember, this article was a joke (but it would be pretty awesome if it was real)

Move Over BodybyJake, There’s a New Sheriff in Town

Randy Couture has had the workout market monopolized for nearly a year now, but after the Ultimate Fight Night: Florian vs Gomi press conference, there’s some new competition on the market.  Roy Nelson. 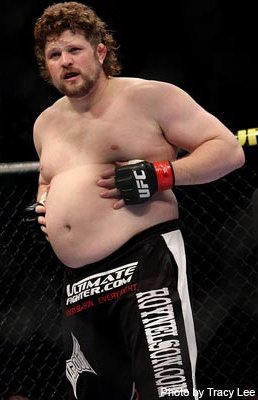 Yep, you heard it here first, Roy has tossed his hat into the ring of commercialized workout routines with his new home video series BodybyRoy.

“Couture’s Tower200 promises to make you bigger, harder and stronger.  My 5 disk DVD set simplifies that plan, you will only get bigger, and that’s so much easier,” said a noticeably excited Nelson at the post fight press conference.

When pressed for details, Nelson added, “Over the course of my intense 6 month program you will be required to ingest a very Burger King-oriented diet.  Eventually, you’ll progress from one whopper a day to 17.  For those on a budget, I’ve developed a more cost conscious program that focuses solely on items from the BK Value Menu. You’ll be performing my patented belly rub in no time!  If you don’t put on a solid 65 pounds, I’ll guarantee you your money back.”

The most intense workout routine featured classic weight gaining maneuvers like shopping hungry, lounging around on the couch all day watching TV and starting a World of Warcraft account.

Are you still not convinced?

Listen to these success stories:

I was barely pushing 300 pounds and was losing all motivation when BodybyRoy came into my life.  With Nelson’s help, I put on a solid 83 pounds in only 3 months!  I’m so huge now my shadow has a shadow and I couldn’t be happier!

I used to punish my body daily as a fitness instructor, but honestly I’d never accomplished anything in my life until trying out BodybyRoy.  After dedicating myself to the extreme program for over a year of beta testing, I made headlines!  ”Behemoth Woman Cut from Apartment by Firefighters,” I’ve never been so proud.

Keep an eye out for BodybyRoy coming to stores near you!