Five of the redacted names from the Jason Grimsley Affadavit by IRS Special Agent, Jeff Novitzky, have finally leaked to the media after four months of speculation. Multiple media outlets have now published the redacted names of six former teammates including David Segui who confessed to ESPN that he was taking human growth hormone legally.

UPDATE: The Grimsley affidavit was unsealed December 19, 2007. It does not name Roger Clemens, Andy Pettitte, Brian Roberts, or Jay Gibbons. The only mention of Miguel Tejada is in reference to a single conversation about amphetamines. All five aforementioned players were featured prominently in the Mitchell Report.

The report, first surfacing in the Los Angeles Times, said an anonymous source with access to the unedited version of the affidavit, let the newspaper view it, but didn’t turn over the document. The Times said a second source who had identified the other players provided additional details about the document. 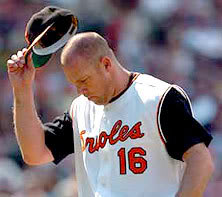 According to the report, Grimsley told investigators he obtained amphetamines, anabolic steroids and human growth hormone from a source recommended to him by former Yankees trainer Brian McNamee. McNamee was the personal strength coach for Clemens and Pettitte when Grimsley played for the Yankees. Later in the Affidavit, Grimsley stated that Clemens and Pettitte both used ‘athletic performance-enhancing drugs.”

On Wednesday, Gibbons told ESPN The Magazine’s Amy K. Nelson he hadn’t seen a copy of the affidavit but was told by his agent and other journalists that his name was in it. He also said he assumed he was named as part of the group to which Grimsley referred when discussing amphetamines.

ESPN also reported that according to three sources, the Orioles’ front office held separate meetings with Tejada, Gibbons and Roberts in June. The meetings took place to inform the players that their names were rumored to be on the affidavit, and that they should all consult their lawyers. According to one source in the room, the meeting was simply a heads-up, and no other detailed information from the affidavit was shared.

The sixth player named in the affidavit was former teammate David Segui. Segui came forward in June admitting he was the player mentioned who was using hGH he got from a doctor. He said his use was legal, obtained with a valid prescription. Segui conceded he never informed Major League Baseball of his hGH use as was required.

Grimsley was never arrested and has not been charged with anything. Since the report surfaced in the media last June, Grimsley has complained to friends that federal agents attributed statements to him that he never made. A friend of Grimsley’s said, “Jason is loyal to the death, a hardheaded guy who would not give up his friends. The only names he discussed with those investigators were names … [the investigators] suggested to him.”

Reaction to the story by the involved parties.

Clemens to reporters before the Astros game on Oct. 1:

“I’ve been tested plenty of times. My physicals I’ve taken, they have taken my blood work. I have passed every test. Again, I just find it amazing that you can throw anybody out there.”

“I didn’t see (the report), nor do I need to see it.. I think it’s very dangerous and malicious and reckless on their part from some guys to have a document or whatever he did and supposedly put it out there with somebody else’s writing on it. These are the things we’re hearing.”

“Grimsley never worked out with me or Andy at any point. I don’t know where that’s coming from. When it’s going to take a serious turn for me is when one of my sponsors pull out, then somebody’s going to be responsible for that. Then my lawyers will take over from there.”

Pettitte to reporters before the Astros game on Oct. 1:

“I played with Grimsley for a couple of years in New York and had a great relationship with him.”

“I guess reports are saying I’ve used performance enhancing drugs. I’ve never used any drugs to enhance my performance in baseball. I don’t know what else to say except to say it’s embarrassing my name would be out there.”

Miguel Tejada to the Baltimore Sun:

Jay Gibbons to the Baltimore Sun:

“I have passed every test administered by Major League Baseball over all the years. And I am not going to dignify these claims and accusations with any further response.”

“I never had a single meaningful conversation with Jason Grimsley in my life.. This is a joke.”

Brian Roberts to the Baltimore Sun:

“His accusations are ridiculous. We’ve had steroid testing, and I’ve taken all the tests. There is no point in getting into verbal wars. That’s really all there is to say.”

“Grimsley and I had zero relationship when he was here. I haven’t talked to Grimsley about anything related to steroids in my life.”