Butch Davis Jacks Up Another Tradition

Butch Davis Jacks Up Another Tradition 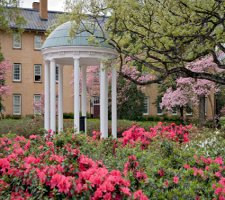 North Carolina football is in the middle of a complete resurrection.  Butch Davis was hired to fix North Carolina’s football program and make it into something that could stand alone with the great basketball tradition they have on campus.

Remember that Davis was hired at Miami back in the 90′s the fix the mess that Dennis Erickson left behind.  Davis not only fixed the mess, but it was with his team that Larry Coker won a National Title.

Butch Davis is a proven coach and currently the only people in the country who hate him live in Cleveland–though, to be fair, he did destroy the Browns.

So, what’s the problem at UNC?  More media, more technology, and more kids being recruited.  It appears that “back in the day” it was easy to commit recruiting violations.  Nowadays, you can’t slip a kid any money or gifts without the whole world finding out.

I agree that everyone probably commits small “secondary violations” every year, but when the NCAA wants to “investigate” your program you know you have problems.

Did the resurrection at North Carolina just stop dead?  This is a lesson for all college teams–you’re at risk of being dragged into an investigation that will leap cross-country.  Oh, and your progress will come to a screeching halt.

It appears that Butch Davis isn’t the smartest cheater in college football.  The NCAA is talking to South Carolina Tight End Weslye Saunders.  I know, I know this story is about North Carolina, but stick with me.

Just imagine what two coddled young football players–who have never been told “no” in their lives–can do in South Beach.  The NCAA wants to know who was paying for travel and hotel rooms.

I’d like to know who paid their cover for all the clubs they probably hit, bought their alcohol, and heaven knows what else.  Though I thinks it’s fair to assume something like “strippers”, “girls”, “girls”, and “girls” might have been involved.

I fully expect more to come out than just hotels and travel expenses.  Plus, because the NCAA has to talk to a kid from another school you have to ask the question, “Who was watching where the money was spent?”

If you’re going to cheat and break NCAA rules wouldn’t it behoove you to make sure your players aren’t hanging out with players from other programs?  This Saunders kid from South Carolina has no reason to lie to investigators.

If someone gets caught it’ll be UNC and South Cacalack will be off the hook.  Now he can help ruin a weaker program and be a “semi-hero” in Columbia–all for taking improper benefits indirectly.

Strike One for Butch.

The NCAA is taking the investigation one step further.  They’re talking to all of UNC’s potential NFL draftees who chose to stay in school.  Why?

Well, if a kid passes up a lot of guaranteed money to hang out in Chapel Hill, NC–you’ve got to start asking questions.  Let’s think about it for a minute.  Would you rather:

1.  Stay in Chapel Hill and go to a really hard school–UNC is tough, or

If you’re not exactly a 1st-rounder you might stay in school because you’re getting paid while you’re in school.  Why else would you hang out in Chapel Hill?  I don’t see any Rhodes Scholars on this team, committed to their education and such.

The NCAA requested phone records from all of the program’s future draftees to see which agents they have talked to.  If they find that Butch Davis has agents crawling all over his program that’s a problem.

Plus, I love the reason why the NCAA is snooping around.  A source told Joe Schad that the NCAA was trying to, “make sure no Reggie Bush stuff is going on.”  In case you don’t know, “Reggie Bush stuff” is houses, cars, and lots of money.

The bottom line is that something is going to come out of this.  Let’s say that the worst thing that happened is this Saunders kid screwed around in South Beach for a couple days with his buddy.

Every team in the ACC and SEC is going to ask their recruits, “Do you want to play for us, or go mess around in South Beach like those hooligans at North Carolina?”  The negative recruiting will take on a like of its own.

Plus, I want you to imagine what a problem this presents for UNC Basketball.  I’m not a fan of Roy Williams, but he isn’t messing around.  Imagine how angry he’s going to be when his rivals use the same negative recruiting tactics on his program?

I know that we blame LeBron James for killing Cleveland–and he did–but Butch Davis struck the first blow earlier this decade.  I’m afraid he may have struck again in North Carolina.

Is This A “Fixable” Situation?

In short, no.  North Carolina football has done one productive thing in the past 20 years.  They tied Georgia Tech in 1990 when the Yellow Jackets were Co-National Champions with Colorado.  Without that tie the Jackets might have been the outright champions.

When the NCAA is done with North Carolina football they’ll be down a few scholarships, they might have to skip the postseason for a year or two, and that will be that.  Who is going to go to North Carolina if Davis isn’t paying anymore and the team is going nowhere fast?

Plus, as we get deeper into the “conference expansion” era the expansion of the SEC and ACC will choke out the Tar Heels.  They’ll always be able to thrive in basketball, but their football team will be crushed under the weight of new teams.

If the ACC were to bring West Virginia, Pittsburgh, and East Carolina into the conference I’d like you to tell me how the Tar Heels could beat any of those teams–and without cheating.  You can’t.  Nobody can.

Butch Davis strikes again–only this time he ruined the reputation of a proud University.  You’re out, Butch!