This Is Why I Broke Up with the Braves

This Is Why I Broke Up with the Braves 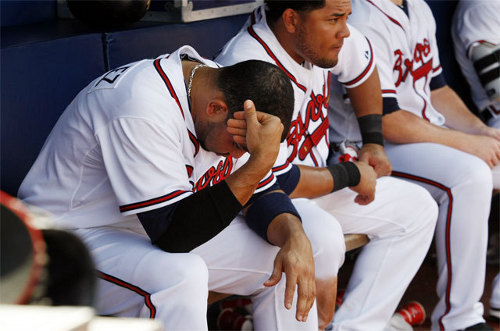 Hi, we’re the Atlanta Braves, and we screw things up!  We’ve been doing it for a long time, but this is what we do.

In the 90′s we were the best-run franchise in baseball — not to mention nearly all of professional sports, aside from the 49ers under the DiBartolos.  We had John Schuerholz and Bobby Cox pumping out talent like you wouldn’t believe.  They won no matter what.

We abused the baseball IQ of these gentlemen for 15 years by only winning one World Series and losing four others. Frankly, we’re surprised that Marquis Grissom caught the final out in 1995 because, let’s face it, we let the stupid Cleveland Indians take us in 6 games.  THE INDIANS!!!

After screwing up the ’91 and ’92 World Series with Minnesota and Toronto, you’d think ’95 would have started something. Nope.

Instead, they decided that ripping our hearts out in ’96 would be better.  Of course, letting the Marlins win the World Series in ’97 just made it worse.  Letting Chipper win the ’99 MVP and losing the World Series to the Yankees AGAIN was just tough to swallow.

But you kept saying that those consecutive division titles meant something.  They DON’T!  You know what they mean? They mean you can win in the regular season but you’re freaking hopeless when it comes to the playoffs.  Rings count, period.

But Now I’m Over It

You had the best pitching staff in baseball for a decade.  You burned out Steve Avery for no reason, even though he was the youngest and freshest guy you had.  You were carrying Maddux, Glavine, and Smoltz and all you could muster was one championship?

The Yankees and the Marlins didn’t have half the pitching you had and during your 15-division-title-streak, and yet they won a combined 6 championships.  SIX!!

How do you expect me to feel about that — warm and fuzzy?  I don’t have time for that crap.  I really don’t.  You see, even when the Lakers were down they were working their asses off to get better, make the right move, and draft the right people. Anybody remember where Kobe Bryant went in the 1996 Draft?  13th overall.

The Hornets drafted him and they stupidly traded him to the Lakers.  Why?  Because Jerry West is a freaking genius and he stole Kobe Bryant, a top 5 all-time player, away from Charlotte.

What did the Braves start doing about the same time?  Blowing through players like they were Kleenex. Every top prospect or decent player the Braves had wilted like a dead flower after just a couple years on the team.  They kept players past their prime — they leaned on the wrong people.

Then you bring back Tom Glavine and John Smoltz.  You’re not playing for anything and clearly rebuilding.  We all think you’re going to honor these guys, try to get something out of them, and give us one last hurrah.

Instead you trade Smoltz and let Glavine wither away without ever really using him.  You dishonored two of the top five players in the history of your franchise within the same month.  Seriously?

So, when I broke up with the Braves last year no one should have been surprised.  They disappoint everyone.  That’s what they do. They held a seven game lead in the NL East in the summer and now they’re fighting for their lives just to get in the playoffs.

I’m over it.  My wife, Heather, is a Reds fan and at least they look like they’re trying to do things right.  And let’s say they start sucking, at least I won’t be miserable alone.  I’m done being disappointed by a lackluster franchise.

Peace out, Bravos.  I quit.