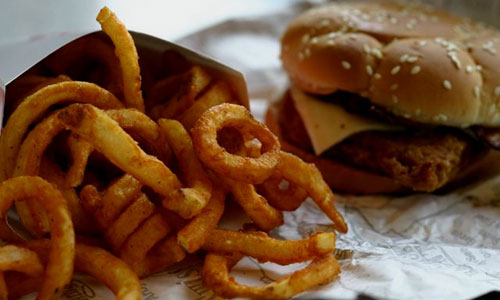 In Talladega Nights: The Ballad of Ricky Bobby, Ricky Bobby’s father says, “Word around town is that I got a crazy son who wants to go fast!”

I think that sums up the attitude of pretty much everything in the United States. We want it, and we want it now! That’s the premise of fast food, after all! We’ve all seen how today’s fast food epidemic is affecting us, but where it began was quite different. 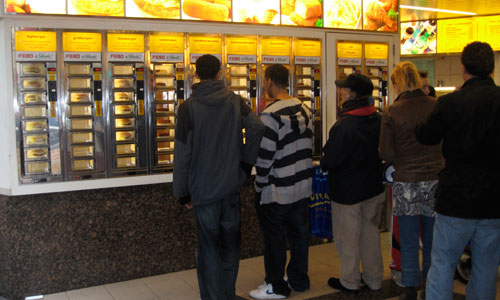 In the early 1900′s, the automated food delivery process began in New York City. Diners would come inside the restaurant, feed coins into a machine, grab their selections, and then stuff their faces. It was a marvel of modern times called the automat.

Essentially it was a cafeteria with a wall-to-wall sandwich machine. The windows were coin-operated, just as today’s machines are. However, this wasn’t today’s stale egg salad on white.  You could get hot coffee, macaroni and cheese, and cakes and pies galore, as well as standard sandwiches.

The automat gained popularity, and retained it’s fame until the 1940′s. The last remaining automat closed in April of 1991, ending an era. 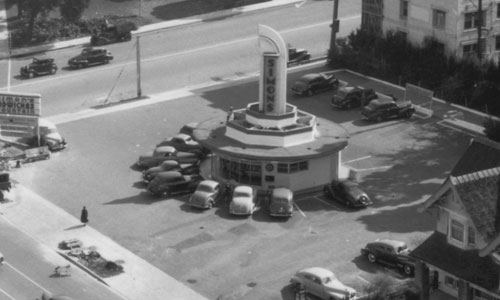 As cars became more accessible to the average family and Route 66 was a favorite way to travel, Americans needed more on-the-road dining options.

In the 1940′s, drive-in restaurants popped up. They were staffed by carhops and had an internal kitchen that functioned like the kitchen in a regular restaurant. The only difference was people ate in their cars rather than inside at tables.

In 1948, the McDonald brothers closed up shop for three months to turn their drive-in into a drive-through. They developed the “Speedee Service System” to cut the fat away from getting orders ready, and thus developed the first known assembly line in modern restaurant food.

Ray Kroc, a mixer salesman, bought the rights to franchise the McDonald’s restaurant and began spreading them throughout his home state of Illinois. Billions of burgers later, McDonald’s has become so successful that they are one of the thirty companies to make up the Dow Jones Industrial Average.

No wonder we’re known as the fast food nation. Our food supply has gone to hell in a fry basket. Getting back to our food roots is going to take some time.

Welcome to the Slow Food Movement. Because “slow food aims to be everything fast food is not.”

What Is Slow Food?

You’ve heard me talk before about why I believe in eating local foods whenever possible. There’s often quite a bit of overlap between locavorism and slow foodism, as people who are passionate about food are often cut from the same cloth.

That said, proponents of slow food often take this passion further than just preferring local foods. There are three main aspects of slow food that even a food snob like me has to appreciate: biodiversity, rediscovering the joy of eating and linking food producers to consumers (or co-producers, in slow food speak).

The Importance of Biodiversity

Did you know that there are more than two hundred varieties of bananas known in the world?  I count myself fortunate to have experienced four of them.

The first is your average grocery store banana (called a “dessert banana” in the industry), then there’s the plantain, the dwarf or fingerling bananas, and I’ve also eaten red bananas.

The Slow Food Movement wants to restore our foods so that they taste the way they were meant to taste. When seeds are hybridized to give us the largest fruit, the most pest-resistance, and the greatest yield, we’ve forgotten what’s important. Taste!

Do you remember what food tasted like when you were a kid? Corn on the cob? Watermelon? I do—and that lifeless tomato from the store just isn’t it. I miss the taste of food—being able to savor it rather than just get it down because it’s good for me.

This problem isn’t limited to fresh produce. Think about ancient grains like spelt and quinoa.  Think about how favorable genes are bred in cattle for dairy and beef. The list goes on and on.

Biodiversity in our food supply is an endangered species. There are a couple of organizations fighting to save seeds from our foods and preserve either their tastes or the memory of their tastes. Ark of Taste and the 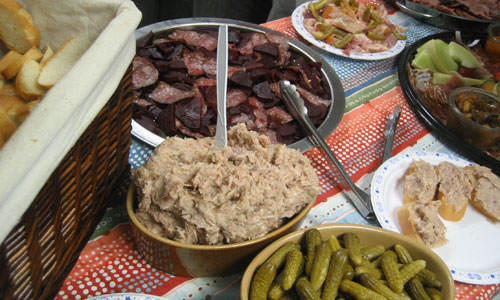 I know, it sounds a bit like A Clockwork Orange, reprogramming our tastes and whatnot. The efforts of the Slow Food Movement are designed to get us back to food—reconnect to it in ways we did long ago.

The point is to show people where food comes from, how it’s made, and how it tastes. The possibilities in this area are diverse.

Starting with the youngest consumers makes sense. When children are interested in the growth of food and how to prepare it, they influence their parents. I believe the children are the future of food (sorry Whitney).

To develop adult palettes, Slow Food aims to have workshops, tastings, and cooking classes.  It’s really not such a stretch to believe that when we know how to prepare food in ways that are enjoyable to us, we’ll do it more often. 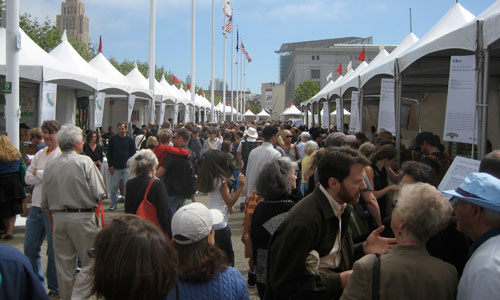 Slow Food believes that we are all co-producers of food, not simply consumers. They say that by becoming informed about how our food is produced and supporting those who produce it, we become partners together in the farm-to-table process.

To that end, they organize farmer’s markets, and meetings at farmer’s markets that are already established. They hold events, like a handmade ice cream tasting in the Atlanta chapter each June. Some get together for potlucks every month or two.

Other chapters bring in excellent wines or cheeses, along with their producers, so that the final consumer gets to meet the person making their favorite treat. In short, the connections portion brings us back to relationship with food itself and the people who craft it.