The Answer Returns to Philly

The Answer Returns to Philly 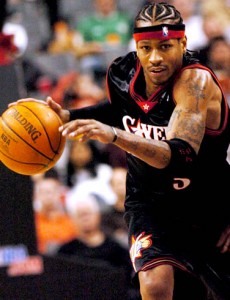 They say you can’t go home again.  They also say that when you make a decision to retire, you should stick by it, especially in pro sports where the game seems to pass the long in the tooth veterans by faster than ever with the influx of young talent, both domestic and foreign.  They’ll tell you that a second act will never be as successful as the first run.

Ask Michael Jordan, who, after winning six titles with the Bulls, came up short with the Washington Wizards when he came out of retirement.  While Brett Favre may be flying high now with the Vikings, let’s not forget that this is his SECOND unretirement.  He also has quite a variety of weapons at his disposal.  His first time back in the mix after deciding to hang it up?  He started off hot, but then faded like a burned out star on the horizon as the Jets bottomed out and missed the playoffs.

Now, the same questions will be asked of Allen Iverson.  Will “The Answer” BE the answer for a 76ers team floundering at 5-14 with eight consecutive defeats?

Iverson, who retired after an ill fated signing with, of all teams, the Memphis Grizzlies, resurfaced in the city of Brotherly Love, with the franchise that drafted him first overall in 1996 this week, signing a one year, non guaranteed contract.  If the Sixers decide to guarantee his deal on January 10th, Iverson would make in the neighborhood of $650,000 for the season.  He’ll step right back into the starting lineup, with the Sixers point guard Lou Williams out six to eight weeks with a broken jaw.

Iverson spent a rocky decade in Philadelphia, with rants, tirades, arrests, and more than one battle with Larry Brown.  He is best known for his rant in 2002 about practice, where he derisively used the team “practice” almost twenty times in his monologue.  Philadelphia shipped him to Denver in a deal that netted the 76ers Andre Miller, a pass first, shoot second point guard that was a definite 180 from Iverson, who is a slasher and a scorer, but not necessarily a creator.  Following a season and a half in Denver, Iverson was dealt to Detroit in a deal that sent Chauncey Billups to the Nuggets.  Suddenly, the Nuggets got hot, winning the Northwest Division, while Iverson became more of a bench player in Detroit, shooting a Chris Dudleyesque 41.6 percent from the field in 54 games.

After leaving Detroit, Memphis was the only team interested in signing Iverson, for a one year deal.  He was coming off the bench, but after three games, where he averaged just over 12 points a contest, he left the team to deal with personal issues and then agreed to a mutual agreement with the team to release him on November 17th.  Other than the 76ers, the only team interested at all in potentially signing the 34 year old Iverson was the New York Knicks, who are in a perennial rebuilding.  It was also expected that Iverson would be wanted to come off the bench, which would have soured him on signing with the team as well.

One has to wonder if this is little more than a publicity stunt for the Sixers.  They are 29th in the league in attendance, and floundering with the fourth worst record in the league.  The only positive they can take so far is that they are still THIRD in their division, as the Knicks (4-15) and Nets (0-18, setting a NBA record for most consecutive losses to start a season) reside in the Atlantic Division as well.  Of course, given the weak teams in the Eastern Conference, if Iverson can turn the tide for the 76ers, they still could get in the mix for the playoffs, as despite the horrible start, they are just three games out of the eighth seed right now.

It won’t take long for Iverson to face his former teams, as he is expected to make his debut next Monday against the Nuggets, while the Sixers then face the Pistons on Wednesday.  One has to think that Iverson will be on a much shorter leash this go round than he was as the face of the franchise.  The 76ers are a team that is much different in complexion and construction from his first tenure.  Andre Iguodala is the feature player, and the swingman has done an admirable job with less than top flight talent around him.  Other than the injury plagued Elton Brand, there is little in the way of “name” talent on the roster.  Their best bench player, Marrese Speights, who was averaging 13 points a game in ten contests, is out eight weeks with a knee ligament tear.

Can Iverson save the 76ers?  I doubt it.  He’ll just be added to the long list of names of players that didn’t really know when to give up the rock when it was time.  It’s a shame to see a former league MVP and All Star become a shadow of what he actually was.  Sometimes the lure of the money, the lure of the fame, of the adulation of thousands, if not millions, have always been the swaying factor in the careers of athletes.  Unfortunately, it comes to the point that such things are far too common instead of just walking away.