Reversing the Aging Process with Steroids & hGH in Baseball

Reversing the Aging Process with Steroids & hGH in Baseball

Over 100 years of baseball history and the statistics therein often tell us what we already know. For one we know rookies generally struggle when they arrive in the big leagues. They lack experience and, assuming they are in their early twenties, they are still maturing physically. As they gain experience in their first few seasons, they are also gaining strength. This combination accounts for the rapid incline in the early twenties on the performance curve of a baseball player (Figure 1-1). It is often noted that the peak age for a player is 27. Research done at Yale University, Sabernomics, Baseball Notebook, just to name a few, have yielded approximately the same result. It should be noted that in spite of the variation in formulas used to calculate these figures, the results consistently show the peak year to be right around 27; they also reflect the same aging/performance patterns before and after the peak. 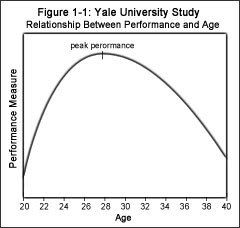 We have all watched players in their mid thirties show their age. The baseball schedule is grueling, and constant and nagging injuries plague the 34 year old much more than the 24 year old. As a player ages his strength and stamina decrease and his performance follows. The decrease on the performance curve shows a less severe angle than the increase before the peak. A player can compensate for his declining physical condition by being smarter. He is still gaining experience. Using steroids and human growth hormone (hGH) can cause a player to grow stronger than nature would have allowed. The hGH (Kalpatropin for Sale) actually starts the body growing again to accommodate larger muscles brought on by the increased testosterone levels from steroids.

Jose Canseco went to great lengths campaigning that the right combination of steroids and human growth hormone (with proper nutrition) was akin to the fountain of youth. He’’s rescinded parts of his assessment of the benefits of steroids and hGH, but surely because of the adverse affects its glorification will have on youth. At the root of it all, Canseco thought it needed to be researched more, that the research could be of great benefit to society as a whole. There seems to be some validity there.

It’s quite obvious that steroid use is most attractive to players declining physically, whether it be short term decline due to an injury or long term due to aging. Ken Caminiti, Jose Canseco and others have described the benefits to an aching or healing body in detail. If steroids allow you to stop the aging process or potential reverse it, the beautiful statistics of baseball should reflect it.

The charts to the right list all players who have hit 35 home runs at age 35 or older. The charts are fairly similar but for the fact that one represents a 15 year span while the other represents a 90 year span.

Granted the 90 year span covers numerous eras, some that weren’t as conducive to offence, rather than one era very conducive to offence. But seeing as how the 15 year span was partially (smaller strike zone, harder bats etc.) inflated offensively by the use of steroids themselves, it hardly seems like it should be considered a handicap at all when compared to a span 6 times longer with comparable peak levels otherwise.

It is an oversimplified comparison of aging, durability and performance, and It stands to reason atleast some players using steroids should come up on this list. 11 of the 24 players on the 1990-2005 list are directly linked to steroid use (Barry Bonds, Mark McGwire, Rafael Palmeiro and Gary Sheffield). If you include Sosa, Finley, and Galarraga, who seem to be surefire steroid users, that toal jumps to 17 out of 24. A strong case could be made against every single player on the list.