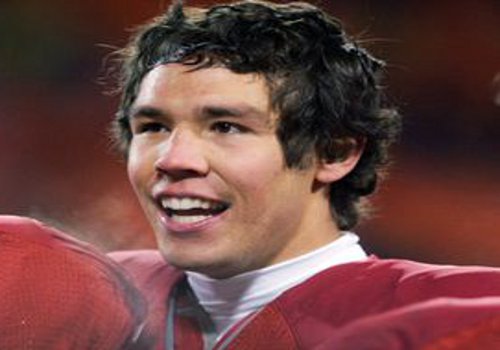 Sam Bradford just signed a $78 million contract with the Rams before he even threw a pass in training camp.  $50 million of it is guaranteed.  His “people” got the negotiations done in the middle of the night so he could show up to practice.

Tom Brady is “unhappy” with the progress on his new deal.  I’ve heard him say–and I’m paraphrasing–that he will “hopefully make the team” and he “will do his best,” but let’s face facts.

These preening/posturing QBs don’t want to try too hard until all the money is in their pockets.

If Tom Brady was really a “New Englander” like he says he is then he’d keep his stupid mouth shut.  What purpose is there in talking to the press about a contract that will not be in effect until next season?  He wants to preen and posture for the cameras.

He’s got that smug look on his face all the time. Acting like he’s “one of the guys.” This guy is no more approachable than a King Cobra in heat.

Tom Brady thinks he owns the Patriots. He thinks they owe him something for winning them three Super Bowls. What he forgets is that Adam Vinatieri won all three of those Super Bowls with his foot.

Tom Brady’s most productive season?  It featured a record 50 TD passes, an 18-1 record, and a historic Super Bowl loss to the Giants. If I were Bill Belichick I would have smacked that smug grin off his face and went with the next guy.

If Drew Bledsoe can be “Drew Bledsoed” then so can Mr. Brady. Period.

What about Sam Bradford?

Besides the precedent set in previous years of giving first-rounders big bucks–what purpose is there in saying you want more guaranteed money than anybody has ever gotten?

Isn’t that the most disrespectful thing you’ve ever heard?

Listen up Sammie! You had ONE good year at Oklahoma and you won the Heisman, good job.  Then you hurt yourself when you came back to school. Then, you somehow convinced the Rams to give you $50 million guaranteed dollars for an arm that probably will never be completely healed.

You just gave Peyton and Eli Manning, Drew Brees, Aaron Rodgers, Tony Romo, and even Brett Favre the finger.  How much more loudly can you shout at these guys, “I think I’m better than you!”

Show these men a little respect and show the Rams a little respect. You haven’t sold a ticket, won a game or even thrown a pass. The least you could do is say, “I’m going to be rich either way, so what helps the team?”

Bradford didn’t say that. He thought to himself, “I’m Sam Bradford, I went to Oklahoma, I’m pretty, girls like me, and the Rams are desperate”.

He took advantage of the Rams. How could they not draft him?

But has this kid ever even been to St. Louis?  Ever been down by the Edward Jones Dome?  Does he really think there is room in that town for a $78 million payout to a damaged kid who isn’t Kurt Warner, Jr.?

Take a look around asshole–you’re in a baseball town and you just took them to the cleaners. If I hated you any more I’d have to change my name to protect my identity.

I hope setting the “sacked record” is fun.

And Then There’s ‘Ol Brett

Brett Favre makes me fear for the future. Every time he does this whole, “I don’t know if I’m coming back or not” thing I want to scream.  How many kids are going to take this idea to the extreme?

The first time a kid holds a press conference to announce where he’s going to college and says he can’t decide yet–I’m blaming Brett.

Does anybody else want him to cry again, just for fun?  I know I do.  If I were Brad Childress I would have hired someone to kick Brett in the shins everyday just as a reminder of how much he’s screwing with the Vikings.

I think the more tears we get out of Brett the better. Maybe when he’s throwing to some high school kids in Hattiesburg, he’ll stub his toe and skip training camp.

Then he’ll trip over his cast and break his nose. That way, when he’s looking down his nose at his teammates he won’t be able to see straight.  Yeah, I hate him that much.

I’d tell you to eff off Brett, but I think the rest of the known universe already did that.