NFL Referee Apologizes for Screwing Up the Super Bowl

NFL Referee Apologizes for Screwing Up the Super Bowl 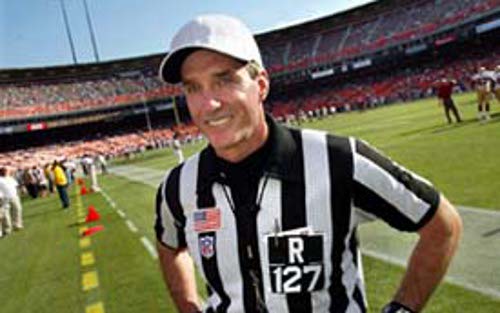 The face of evil. Photo from: Dave Krieg’s Strike Beard

NFL referee Bill Leavy opened a “rule interpretation” meeting by apologizing for sucking at the 2006 Super Bowl. In case you don’t remember, the Steelers beat the Seahawks 21-10.

Now Leavy says he’s “sorry” that he didn’t do better. He rolls his sob story like this:

“It was a tough thing for me. I kicked two calls in the fourth quarter and I impacted the game, and as an official you never want to do that.”

“It left me with a lot of sleepless nights, and I think about it constantly.  I’ll go to my grave wishing that I’d been better.”

You know what, jackass? Seattle fans will go their graves wishing for a Super Bowl win too. So, you screwed an entire region of the country and you didn’t have the balls — at the time — to do something about it?

If you’re the one calling the penalties you can pick the flag. Refs do it all the time! You didn’t pick up the flags because you thought you were right and now four years later you want to say “sorry”?

Your apology is NOT accepted. There is nothing in the world that pisses me off more than bad officiating. You’re whining that you impacted the game and it makes you feel bad? If you felt bad you would have done something on February 5th, 2006.

You can’t come back now and tell everyone whose hopes and dreams you crushed — because you suck at your job — that you’re sorry and you’ll take it to your grave.

Now everyone in the NFL knows your name and you can bet that I’ll be writing about you every time you even so much as look at a yellow flag the wrong way. These players may be pampered, overpaid athletes, but they’re busting their asses.

The least you could do is try. I watched that Super Bowl and I knew your officiating sucked, but I figured you had no idea. Now you’ve confirmed that you have no idea because you’re only copping to it years later.

This says to me that someone brought it up and confronted you with the tape and you had no choice but to admit it.

I’ve griped for years that officials in major sports aren’t really giving their best effort, and everyone tells me I’m being too hard on them. This proves how right I am. You mailed in that Super Bowl like most of your colleagues mail in every other game they work.

Mike and Don Carey are the only good officials left in sports — take notes from them jackass! You thought we’d feel sorry for you because it makes you feel so bad.  We don’t!  We just have a better reason to hate you.

I think the Seahawks should come after you full force. You most certainly should not be allowed to manage an officiating crew, and I don’t want you holding a whistle in any games that I watch.

If I see your face on the TV,  I’m changing the channel. Maybe the next time you ruin an entire NFL season you’ll have the balls to try and fix it on the spot instead of playing for our sympathy years later.

You’re even worse than Joey Crawford, Bennett Salvatore, and Tim Donaghy. Yes, you’re worse than a guy who fixed NBA games and went to jail for it.  I don’t think I could possibly hate you any more right now.

How dare you disrespect the teams, players, coaches, and fans with your half-assed apology? You’re nothing more than a striped-suit.

And a bad one at that.