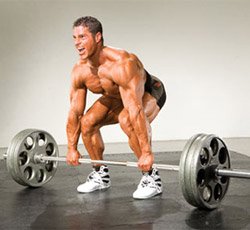 Muscle failure, the total inability to move a weight during barbell bench press, shoulder press, leg press etc. or the inability to perform a rep in a proper way, has always been differently approached by athletes, who – as bodybuilders – praise it as one of the most effective workout routines to gain muscle growth, whereas powerlifters neglect the idea of benefiting from muscle failure and stick to the prescribed number of reps per set and the prescribed weight limit.

Recent findings unveil that muscle failure may either contribute to your success or put you at a risk of a serious injury. Much depends on the principles that are followed while performing such training strategy, which is mainly focused on by bodybuilders.

The most inappropriate way to fatigue muscles like that is performing reps until an athlete fails to lift the weight and is trapped under several dozens of pounds of load. Therefore he requests his partner spotter to complete the last rep for him, instead of attempting to complete it with good form himself. This increases injury risks and infuriates your spotter who has to pump it up.

Athletes who work out solo have to be even more cautious in this case as there is no a close-by fellow to drag off the heavy load of you.

Proper muscle failure that never puts you or your spotter at risk for injury or makes your routine chaotic and ineffective is the sort of failure when the point is reached at which you realize you will most likely fail to complete another rep with proper form. So give a hint to the spotter that you are almost finished and have him follow and control the way you yourself complete last rep. Stop as soon as you are completed.

In solo workouts the muscle failure is considered as achieved as soon as an athlete is aware he is exhausted enough to complete the next rep with proper form. If you ignore and go on with barbells and dumbbells, this may result in a drastic injury that will at least switch you off from the gym for several weeks or even for good. So do not try your luck and stop the set before as soon as you feel you have had it for today’s workout.

Surprisingly enough most powerlifters, who are focused on muscle growth and strength – much like bodybuilders – do not usually include muscle failure routine to their regular training. They are disciplined to perform a certain number of reps per set and never exceed the day’s maximum. Even if capable to lift more weight, the athletes put off till tomorrow what they can handle today, the strategy that is avidly criticized by experienced instructors.