Is Notre Dame Really THAT Stupid? Or Is Brian Kelly Just That Evil?

Is Notre Dame Really THAT Stupid? Or Is Brian Kelly Just That Evil? 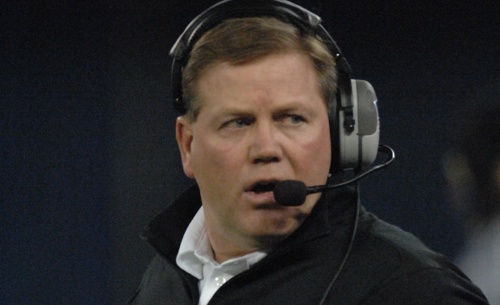 Declan Sullivan, a Notre Dame student who taped practices and games, was killed this week when the hydraulic boom he was taping from was blown over by 50 mph+ wind gusts.

Today, it’s come out that Brian Kelly elected to have practice outside even though winds were gusting to 50 mph in the area.  Can someone explain to me how that even makes a little bit of sense?  Then, Kelly said:

“You have to be able to look at the weather conditions and find out whether you believe it’s going to be a productive day, first. We believed it to be productive, it was productive, obviously up until the tragedy. Practice must be safe.”

Ok, Mr. Kelly, if practice is supposed to be safe why are you having it outside in weather like that?  Oh, that’s right, you could give a $%$&#*%^* about your players, their well-being, or anybody else other than yourself.

I guess most of the population has forgotten that you’re the same guy who told his Cincinnati team he was leaving for Notre Dame not in private, but at a public football banquet. It was so heartless that Mardy Gilyard spoke to the media outside the banquet and told them “We don’t need Kelly anyway.”

That’s how “beloved” you are. What a jerk!

I know the university is too concerned about winning to actually care that this kid died because you, Mr. Kelly, didn’t mind putting him in mortal danger, but the rest of us see it.

You don’t care, you never cared, and it just makes me sick to even continue writing this column.  Any spin you put on is merely an attempt to shift any notion of blame from yourself.  I used to respect Notre Dame, but no longer.

I’m so done with Notre Dame I don’t even know where to start.