How Did Ryan Reynolds Become An Action Hero?

How Did Ryan Reynolds Become An Action Hero? 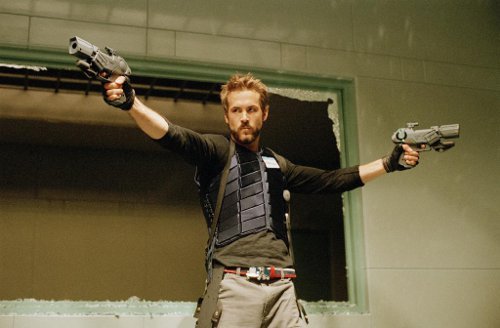 When Blade: Trinity came out in 2004 everyone was surprised to see a “cut” Ryan Reynolds playing the part of Hannibal King. Somewhere between Two Guys and a Girl and Blade: Trinity he got himself into amazing shape.

Reynolds’ transformation into an action hero was not a “fly-by-night” operation. His training program was designed to build muscle and drop body fat for the movie. However, he’s been able to take this training program and use it to keep himself in shape and become an action movie star.

After the success of his role as Deadpool in the Wolverine prequel, Reynolds is using his workout program to get himself ready for his starring role in a Deadpool feature.

Because he has to get into shape so quickly for his roles it stands to reason that many of Reynold’s workouts would be “speedy.” Each one maximized to add the largest amount of muscle in the shortest amount of time.

How does he keep it speedy, and how did he go from “geek” to “action star” seemingly overnight?

It’s all about location, and abs seem to be located “on camera” whenever they are really well-defined. Reynolds has taken to opening his workouts with abs. Reynolds moved himself into a place where he was doing 500-1,000 sit-ups before even lifting weights. He’s said it helped get him motivated to keep going.

Sit-ups weren’t his only tool. He would also hold a medicine ball between his ankles and use his abdomen as an anchor so he could lift the ball. He’s also been known to do that same exercise with a 15 pound dumbbell between his ankles. Reynolds said he would do almost anything to engage his abs. He even recommends checking out a book from the library on ab exercises – just to keep your workouts fresh.

The results speak for themselves, because none of us would have pictured the geek from Two Guys and a Girl looking the way he does now. Hell, the producers of Blade: Trinity thought he got ab implants!

Lifting with a Purpose

Because Reynolds needed to build muscle mass he needed a sure-fire method to put on the pounds and reduce body fat. Lifting became his friend, but only after he started do it the right way.

Reynolds keeps his reps low and his weight high. Instead of pounding a ton of reps on a lower weight, Reynolds would use heavy weights and do 6-8 reps. This allows for time to slow down the negative portion of the lift and burst through the positive portion, which builds muscle mass.

Sometimes this included HIRT or HIIT circuits that helped to “extend” the earlier workouts that were meant to build muscle mass. In hardening the muscles they start to look like stone and give you a chiseled physique worthy of a bodybuilder or boxer.

In addition to his lifting routines, Reynolds made sure to do an “area per day.” So, he would do his back on Monday, shoulders on Tuesday, etc.

This gives you a good pace to work at, and keep you from over doing it. When you aren’t overdoing any one part of your body then you have an easier time avoiding injuries.

There is a lot of information on SteroidsLive about supplements, and I think it necessary to point out that Reynolds was supplementing.

Reynolds has said that he gained “a lot more muscle mass” when he went on creatine. Plus, he was taking multivitamins, L-glutamine, whey, and conjugated linoleic acid (CLA).

Supplementing, for Reynolds, meant he could speed up his results because he must work on a deadline. If his agent tells him, “You’ve got five weeks to get in shape for this movie,” Reynolds has to get in shape or else.

He also maintained  a protein-rich diet and the muscle started to pile on. Really, you could use any of the diet plans on SteroidsLive to help you with a “speedy process” like the one Reynolds undertook.

The important thing to remember is to eat right and don’t try anything that seems like a fad. If we’ve learned anything it’s that fad usually equals fat.

Getting Back to the Abs 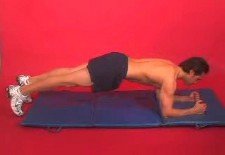 Because Reynolds has become known for his abs it seems only right to talk about a good abdominal workout. Though Reynolds primarily does sit-ups, an important part of any ab workout also includes isometric exercises.

Isometrics will give you a chance to change up your routine and keep from getting bored. Reynolds himself said that if you “hate your workout you won’t do it.” Isometrics should help with that.

Place your elbows and hands on the floor and get into a plank position. You’ll need to hold your abdomen in so you don’t arch your back.

Hold the plank for 30 seconds. You’ll shake at first, but this is an “ab control” exercise so you’ll get stronger the more times you do it.

Place your elbows and hands on the floor. Instead of starting with your toes on the ground rest on your knees.

This is still an “ab control” exercise. Hold it for 30 seconds.

You can also do variations on the plank. You can stretch on arm straight up in the air and hold. Changing sides will give your obliques a nice workout as well.

If you’re really crazy you could rest your hands and elbows on a BOSU ball. Not only will you have to hold your body in place, but you will have to balance on the ball.

This kind of exercise requires even greater strength than the plank. It would be a good “extension” of your regular isometric workouts.

Whatever you do, don’t stop working your abs. Ryan Reynolds was able to build muscle mass because he was starting with ab workouts everyday. You can do the same and see great results – not just on your abdomen – but everywhere!