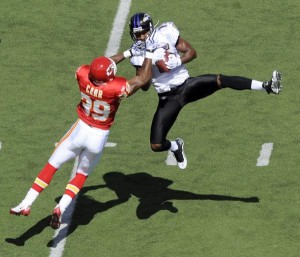 I’m 12-3 and now I need to keep the roll going.  At this point I’m convinced that I have just about everybody in the league pegged except for the 49ers and the Cardinals (yes, that whole game jacked me up last week.)

I have some “deep thoughts” about a few of these, but bear with me, I promise there’s a point.

Houston is…well….not very good.  Tennessee is….well….better.  With Dunta Robinson getting fined for imploring his owner to pay him on the back of his shoe (yes, he’s THAT stupid) and Matt Schaub turning out to be not the best signing I don’t see how the Texans can win this one.  Plus, they have to contend with the Phoenix known as Kerry Collins.

I think it’s great that Kerry is having a resurgence (Like he needs it.   You know he has an Economics degree from Penn State and he had like a 4.0!)  At any rate, Kerry Collins makes Vince Young look more crazy every time he hits the field.  Vince should have never stepped off the field last season and then blabbed about his feelings.  Is he kidding me?  No one plaing in the NFL, watching it or managing it gives two @#$ts about feelings!  Get yourself together Vince or you’ll be the next Kordell Stewart (unrecognizable and doing meaningless ESPN analyst spots.)  Either way, it doesn’t matter.

Now this is a cool time to have this game.  Drew Brees threw for amillion yards last week and he certainly isn’t going to slow down.  Donovan McNabb has a cracked rib and we’re not sure if he’s going or not.  Listen folks if Donovan goes he could get killed on the field.  Ribs touch lungs and broken ribs puncture lungs if you play football and get hit by some gigantic monster…that’s bad.

So, since I don’t think that McNabb is going to play then we have to consider if Jeff Garcia can get anything done.  I think Jeff Garcia is a nice quarterback.  He made the Pro Bowl 3 years in a row (I think) back in the day with the 49ers…so he’s not incapable, but he’s also new to the team and the pressure on Donovan is so huge, what do you think it’s going to be like on Garcia?  Yeah, didn’t think of that did you?

New Orleans has to keep rolling.  Their defense, in general, isn’t really stopping anyone so they have to score alot of points (which they can do.)  Think about this though…they’re in a battle with Atlanta to win the NFC South (do you really think Tampa or Carolina has a chance) and they can’t slouch for one second because Atlanta has an offense just as potent (potentially more potent) as theirs and Atlanta ain’t playing around.  Listening to Mike Smith do interviews down here he sounds like the kind of guy who gets off the phone for the interview, turns to his team in a meeting room and says “[Opponent X] is going to die this week!  Do you understand!?!?!?!?!?!”  Yeah, he’s not playin’…

So, if New Orleans is faced with that kind of opposition to win the craziest division in the NFL then they can’t blink…and they won’t blink this week.  Donovan not being there just makes it easier, but they were going to win the game either way.

Like I said in the intro, I thought I had the Cardinals figured out.  They wouldn’t fall into the “Super Bowl Loser Vortex” and ofallthe teams tonot do it they would be the ones and it would be such a good story.  Yeah, yeah, whatever!  No they’ve lost to {my} sucky 49ers and they have to tangle with Jacksonville this week (who only barely lost to Indy and are probably looking for blood.)  Good luck with that!

Kurt Warner is great.  Larry Fitzgerald is great.  The Cards defense is great.  BUT…Jacksonville doesn’t mess around.  You see, I think I had the 49ers and Cards backwards.  The Cards had their day in the sun…and that day is over. { The 49ers might actually beabletonot suck with those York idiots running the team.  Mike Singletary is going to suck every last bit of football out of these losers that he can.  Imagine if he actually had good players!}  Swapping places with the 49ers means the Cards can’t beat Jacksonville…the Jags are just too much.

Last week I said that Oakland was…..well…..really crappy.  Actually, they didn’t look too awful against San Diego.  Now the question is:  Did they run into a Charger team that is less than advertised or are they really starting to improve?

Jamarcus Russell is NEVER going to worth the pick they spenton him, but he might becoming around a little bit.  Maybe the Darius Heyward-Bey kid might be second round talent and maybe the Raider defense won’t look like Swiss Cheese this year.  Maybe….I’m still REALLY skeptical, but I’m will entertain the mere notion that something might be going right in O-Town.

Matt Cassell is still a game-time decision this week and the Chefs should be getting nervous?  Somewhere along the line Matt Cassell needs to start earning his money. I know he’s hurt but he’s all they’ve got.  How long before they just put him in, because when they lose to the Raiders this week fans are going to be pounding on their panic buttons.

Cincinnati has all the right pieces…Palmer, Johnson (I’m not calling him Ochocinco…not gonna happen), Housmanzadeh, but they just can’t get it together.  I’m not sure where the disconnect is, but at this point I don’t see how Marvin Lewis can recover from the team being this bad for this long. I know they went to the playoffs under Marvin, but at some point a change of scenery is probably necessary.  The shame is:  Marvin Lewis is a good coach.  The good news is:  he’ll get another job.

Aaron Rodgers eeked one out against Chicago and crybaby (Jay Cutler) and now he’s got a much easier task dealing with a pretty bad team.  I like the fact that Aaron looks like he’s throwing downhill nowadays and he’s got weapons on offense.  I have the feeling the Packers will be doing the Lambeau Leap so much that Chad won’t have time to punk it.

Poor Matthew Stafford might learn a few things from Brett Favre this Sunday.  As much as we hate on Brett he IS a Hall of Famer with a ring, and Matthew Stafford would be stupid to not just sit there and watch him work.  This kid has been thrown out on the field by a stupid front office and now he has to do everything he can to make it work because if he doesn’t he might as well change his name to Joey Harrington.

Brett and Adrian and Percy can have a monumental field day against the Lions defense. I will admit that Detroit is getting better, but Minnesota is no joke and they’ll prove that today.  If this team were better Brett would probably throw as many picks as touchdowns, but the Detroit isn’t quite good enough to catch all of them.

Washington needs to step it up this week.  All last week the only thing I heard was that this is the first time Jason Campbell has been in the same offense 2 years in a row since High School.   Since High School!  Basically, what that means is that coaches can be pretty worthless when they just flake on and off like dandruff.

St. Louis stinks and they aren’t getting any better.  Honestly, I think Steve Spagnoulo needs time, a bad season, a Top 3 pick and new Quarterback and THEN he can get to some real work.  Until then he’s stuck with a guy they overpaid for, a bad defense, and Steven Jackson wondering what happened (because he’s the best player on the team.)

Rex Ryan threw out some trash talk this week and then spent a couple days this week backpeddling.  He would have been better off just keeping his mouth shut.  He’s got Bart Scott, he’s got Mark Sanchez and he’s got momentum.  That should’ve been enough…

For all the  ”Bill Belichick is a humble genius” talk I’ve got 10 years of experience showing me he’s an arrogant prick.  So, if he’s an arrogant prick (which he clearly is since he probably cheated during a Super Bowl) then he will spare no expense in destroying the Jets.  At the very least he’ll set out to make Mark Sanchez cry like a little girl and essentially eliminate all the confidence he built last week.

Come to think of it:  What if he actually hates the Jets more than he hates Eric Doofgini or Rex Ryan?  That’s a good question…

Jake Delhomme doesn’t suck, but he ain’t as good as everyone says he is…was.  Steve Smith had to go over to Jake last week and try to keep his spirits up,you know, because Steve Smith is so chipper.  Then I heard the D’Angelo Williams was upset all game and now Jake is in the middle of a team that is losing confidence in him fast.  Yeah, this is not going to be pretty.

Atlanta = Mike “The other team will die” Smith, Matty Ice, Michael “I don’t break down” Turner, Roddy “See why you paid me” White, and Tony “Even though I may be the best to ever play my position I still need to prove myself and win a title” Gonzalez.  Oh, did I mention that John Abraham is still alive?  Yeah, Jake is dead meat.

T.O. is already complaining in Buffalo and the fun has only just begun.  Trent Edwards checks down, he doesn’t got up top.  T.O.’s got two choices:  Come back for the ball or shut the f#$% up.  Either way it won’t matter.

As bad as Tampa looked last week against Dallas Buffalo is going nowhere fast.  I think Raheem Morris can make his team redeeming, but the Bills aren’t getting redeeming any time soon.  I predict a T.O. sideline blow-up, 2 drops, and no TD’s this week.

Earlier I said that I had the Cardinals and the 49ers backwards.  Ok,so if I’m right and the Cards suck and the 49ers aren’t bad then this will be a tight game.  Jim Mora isn’t playing around up in Seattle.  When he was here in Atlanta I thought he totally had the right attitude.  Add that to the fact that he LOVES Seattle (he went to Washington) and his family is probably really happy up there I bet every week will be a battle and he can have a long stint in Seattle.

I’m thinking that San Diego is not as good as advertised.  I’m thinking that Ray Lewis walks into every stadium and says “Ya’ll musta forgot I’m the baddest man on the planet!” and since Matt Cassell ruined my haiku last week I’ve got another:

[Did I mention Joe Flacco is good?]

Chicago’s dead o.k.? Really, how long before a burly Bears fan is beating up Jay Cutler in the parking lot? 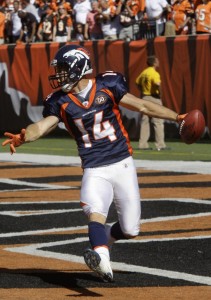 Did you think Brandon Stokely could run that thing all the way for a score? ( There’s a reason “White Men Can’t Jump” is funny,and it’s not the script.)  Doofgini is ruining his team and mismanaging his team woefully.  Denver’s at home, that probably is good for something.

Two guys….standing in place…feet taped down….punches to the face….still hasn’t changed.  Only problem, Dallas’ has a broken hand, a really bad black eye, and a cut on their lip.  New York rolls.

I still don’t think Miami is bad and I think Indy was just getting warmed up.  This game will be good, but Miami probably can’t handle Indy.  Basically, Miami got a pretty crappy schedule to start the season…they can rebound later, but not with Peyton Manning ready to score them into oblivion (you know 14 points isn’t enough for him.)

Enjoy your weekend of football.  Hopefully I don’t screw my picks up too badly, but really some of this should be common sense, right?