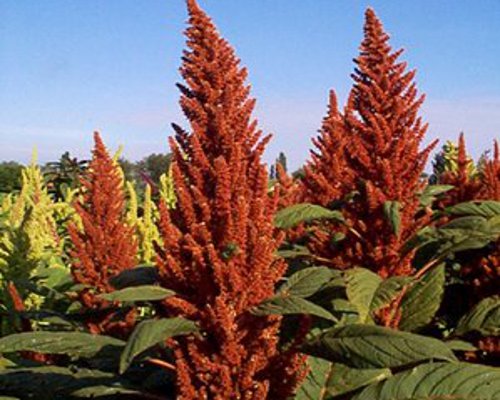 If you’ve never heard of amaranth, you’re not alone. This tiny grain was all but eradicated centuries ago. True to its name, however, amaranth has stuck around and is now making a resurgence.

While it looks like a pale poppy seed, amaranth is actually a member of a class containing tumbleweeds and wild beets — how rustic! World class nutrition doesn’t hurt, either. Add its gluten-free status to the mix, and you’ve got a winner! 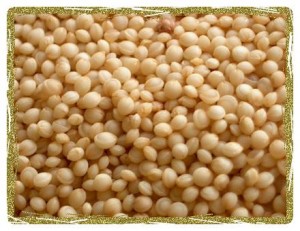 In Greek, amaranth means “everlasting.” Around since at least 3000 B.C., it was cultivated by the early Mesoamericans along with squash, maize, and beans (also known as the “three sisters”). Some varieties of amaranth are grown specifically for their greens. Some are grown purely for their ornamental value, and others still for their nutritious seeds.

The Mayans and Incas used amaranth extensively. It was believed to have magical properties, and both hunters and distance runners ate amaranth before heading out. While we may not believe it has the ability to make things happen, its nutrition profile is pretty magical!

It was widely involved in some of the more brutal religious rituals, and was prohibited by the Spanish conquistadors because of this. There was a time when possessing a single tiny grain was enough to cost you your hands as punishment. These days, amaranth is grown in abundance in Mexico, Peru, Nepal, Canada, and the US.

Amaranth is the highest protein grain around with 28 grams per uncooked cup (oats have 26 grams and quinoa has 24), so you can see right away that it’s a fantastic addition to a bodybuilder’s diet. It also contains significant amounts of lysine, an amino acid that’s difficult to come by in abundance in plant foods. Add to that amaranth’s excellent biological value (how easily it’s used by the body), and you’ve got a high-quality protein.

There’s more calcium in amaranth than any other grain except teff (we’ll talk about this staple African grain more later) with 340 milligrams, and more magnesium than the others too, coming in 520 milligrams. That means you’re getting nearly half your RDA of 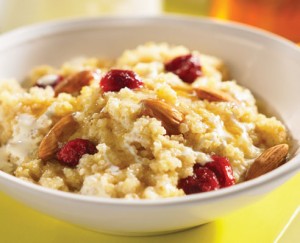 Amaranth has a smell that takes some getting used to. I like to describe it as “earthy”, but I’ve also heard it described as “swamp water.” Depends on where you hail from, I suppose! The taste is nuttier than millet in my opinion, and is definitely better when it’s toasted before being used.

If you’ve noticed a common theme in this series, it’s breakfast cereal. All of the grains I’ve introduced make great hot cereals, and amaranth is especially wonderful because of its high protein content. People often mix several grains to make a custom blend, especially to achieve a balance of high protein, but keep a mild taste.

One super cool thing about amaranth is that it will pop up like really cute miniature popcorn! You simply cover the bottom of a dry pan, fire up the stove top to medium heat for about five minutes, pour in a tablespoon of the seed, and wait for it to pop (around 30 seconds).

I’ve had the most success with a glass lid on the pan, and shallow is better than deep to keep it from burning before you can get it out. Also be sure to shake the pan back and forth so the grains don’t burn (like we did before microwave popcorn, remember?).

Amaranth is very often used in gluten-free flours. In yeast breads, you can substitute around 25% of the wheat flour with amaranth without changing the texture of the finished product. In chemically leavened foods (muffins, quick breads, biscuits), you can swap out 100% of the wheat.

Since it’s so tiny, amaranth is a great addition to soups. Use it in place of acini de pepe for a quick cooking, high-protein substitute to regular pasta 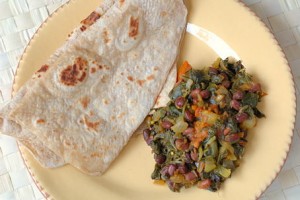 Grind nuts in blender for  about 15 seconds. Combine with other dry ingredients in mixing bowl. Without washing it, combine liquids in blender; blend 10 seconds (or mix in small bowl) and stir into dry mixture.

Cook pancakes on preheated, ungreased, non-stick griddle or frying pan. When bubbly and brown, turn. As the batter thickens, you may need to add another tablespoon or two of water to keep cakes thin (should be no more than 1/4 inch thick). Yields 24 four-inch cakes.

Add amaranth to boiling water, bring back to boil, reduce heat, cover and simmer for 18-20 minutes.

While amaranth is cooking, stem and wash spinach, then simmer until tender. Dip tomatoes into boiling water to loosen skin, then peel and chop. Heat oil in a skillet over medium heat and add garlic an onion. Sauté approximately 2 minutes. Add tomato, mushrooms, basil, oregano, salt, pepper and 1 tablespoon of water. Drain and chop spinach and add to tomato mixture. Cook an addition 10 – 15 minutes, stirring occasionally. Lightly mash tomato as it is cooking.

Prepare a 12 cup muffin pan by brushing with oil. Sift together amaranth flour and salt in a bowl. Add yeast and milk together. In a mixing bowl, beat egg yokes until thick. Add honey and oil. Combine skim milk with egg mixture.

The next time you’re reaching for rice, remember that there’s a grain out there that trumps its nutrition in almost every category, cooks faster, and is just as available (thanks to the gods of the internet). With great nutrition, good versatility, and easy availability, there’s no reason not to add amaranth to your diet.

Whether you prefer your amaranth in sweet muffins or savory pilaf, it’s a super nutrition booster. Give it a shot!