Dianoxyl has Methandienone as an active chemical substance. On the bodybuilder’s slang it is called just Dbol, there are many trade names, here are some of them: Dianabol, Anabol, Danabol and others. It is one of the most common, and effective anabolic steroids ever existed.

The growth of strength and muscle mass is due to the strongest anabolic and androgenic action of Dianoxyl, due to the similarity in the chemical structure with 17-alpha-methyltestosterone. Beginners in taking steroids, notice a noticeable increase in muscle mass for about 6 weeks, about 1-2 kg of muscle a week. The weight of the athlete basically increases not only due to muscular hypertrophy, but also due to water retention in the body. 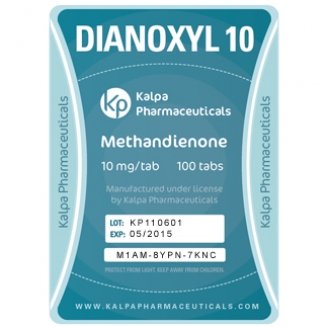 Dianoxyl dosage vary not significantly, with the correct approach to the drug. So, by virtue of the prevailing opinion that the more dosage of steroids, the better is, in fact, everything is not so, no difference, you will not feel, between 20 tablets of Dianoxyl and 10. Kalpa Pharmaceuticals says that there is no direct relationship between body weight, and dosages.

The optimal dosage for an athlete should not be more than 15-40 mg per day, for beginners this dose is reduced to 15-20 mg. With the right approach to training and nutrition, you can achieve very good results in 8-10 weeks, both in strength and muscle mass. At the end of the steroid cycle, the effect of Dianoxyl may decrease, dosage should not be increased, it will be more correct to include new drugs such as Deca Durabolin (200 mg per week) or Primobolan (200 mg per week), or to combine one of them with Dianoxyl.

The known combination of Dianoxyl with Deca-Durabolin is considered one of the most effective stacks, in terms of muscle mass and strength, ideally suited to each other, the dosage of Dianoxyl per day is about 20-30 mg, Deca – 400 mg per week.

The maximum dosage for an athlete should be 40-50 mg per day, only in those cases where the athlete weighs 100 kg or more. It is absolutely pointless to take high doses of Dianoxyl, it will not work better, and also a combination of similar drugs, for example, Anadrol and Dianoxyl, also does not make sense, because the mechanism of action on the body is similar to them.

Dianoxyl should not be taken on the eve of entering on stage, due to the fact that it causes a sufficiently strong water retention in the body, and also an accumulation of fat by the female type due to its convertibility into estrogens. Professional bodybuilders can afford to take Dianoxyl with Parabolan, Winstrol Depot, Masteron, Oxandrolone and others before the competition, naturally with the proper reception of Nolvadex and Proviron.

As for female bodybuilders, they should adhere to the dosage of Dianoxyl no higher than 10-20 mg per day for 4-6 weeks, a longer steroid course and increased dosage will increase the risk of developing masculinization and lead to irreversible changes in the female body.

The duration of the action of Dianoxyl is about 3-4 hours, so it is more reasonable to divide the daily dose by 2-3 doses, because the methyl radical is in the 17-alpha position, the Dianoxyl tablet should be placed under the tongue, to prevent unnecessary problems with liver.

The active chemical in Dianoxyl – Methandienone, becomes not detectable on the doping test on the third day, after the withdrawal of the drug, but it should be noted that the products of decomposition of Methandienone with urine will be excreted longer.

Taking 10 mg of Dianoxyl a day is already beneficial to the athlete, due to a sharp increase in testosterone in the blood (up to five-fold increase), in addition, the production of cortisol is blocked by 50-70% in the body, and as a result, the destruction of the protein in the muscles slows down.

High doses of Dianoxyl for a long time have a destructive, toxic effect on the liver. At a dosage of 20 mg per day, no side effects are observed, although 10 mg is enough to increase liver secretion, but it is restored by itself, after the drug is discontinued.

Strong water retention in the body contributes to the increase in body weight, and as a consequence, it is possible to increase blood pressure, and hypertension, so you must prepare to receive antihypertensives, for example, Clofelin.

The intake of Nolvadex and Proviron is considered mandatory on the course, because Dianoxyl is aromatized, can easily be converted into estrogens, thereby causing gynecomastia.

Methandienone can pass into dihydrotestosterone, causing baldness (if you are genetically predisposed to it), and also because of the strong androgenic effect, the inflammation of the sebaceous glands is irreversible, so it is possible to increase acne on the body.

The intake of 20 mg of Dianoxyl per day for 10 days reduces the body’s production of testosterone by 30-40%, due to a sharp decrease in gonadotropin hormones in the pituitary FSH (follicle-stimulating) and LH (luteinizing).

The so-called phenomenon of pullback, is strong enough, after stopping the intake of Dianoxyl, the strength and muscle mass goes away as quickly as it came, all the excess water from the body goes away.

Aggression against the background of taking Dianoxyl threatens only those athletes who, by nature, are quick-tempered. Many athletes observe improvements in appetite and mood during Dianoxyl intake.

The low price of Dianoxyl and the most powerful anabolic effect make it one of the most demanding anabolic steroids among athletes around the world.