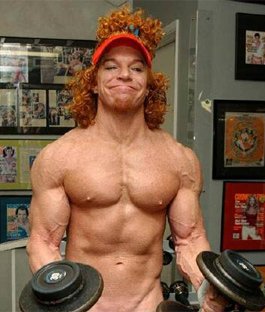 Although a bit out of place on this site, one of the most asked questions has been, “Is Carrot Top On Steroids?” Then the second most question, what is the Carrot Top cycle?

It’s hard to accuse any of using steroids without proof. Heck, there are people that’ll believe Ronnie Coleman is 100% natural, because there is no proof of any steroid use.

Carrot Top is not huge, but he is very lean, and does carry quite a bit of muscle. Does that answer the question of “Carrot Top On Steroids?” No, but let’s look at both sides.

As above, he’s not overly muscular. In fact, there are people in the gym everyday who are 100% natural, are much bigger than him, and even leaner than him. He’s a hard worker, and has been a well known gym rat for numerous years. Add in a bit of genetic potential, and it’s very possible he is natural.

Even as a hard worker, dedicated, and a bit of genetics, his results are pretty amazing. There around thousands, if not hundreds of thousands who bust their ass daily trying to accomplish a similar look to Carrot Top, and fail. The mid single digit body fat percentage, and the extreme vascularity would immediately trigger some steroid alarms in the steroid community. Not only that, but take a look at his deltoids (shoulders) in the picture to the right. The shape and size of those deltoids does not seem very natural, or proportionate to the rest of his body. Some bodybuilders will use a product called Synthol, or another similar oil, to inject into the muscle to make it bigger. Another example of Synthol, Gregg Valentino, but he took it much further.

As for what would be Carrot Top’s steroid cycle… it would probably consist of a low dosage of testosterone, with the edition of Equipoise, Winstrol, Clenbuterol, and/or Anavar.