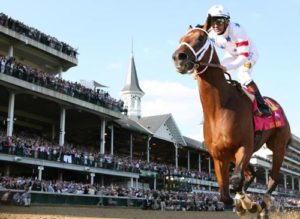 Big Brown is the most popular racehorse in history to have used anabolic steroids. The controversy over steroid use in human athletics has spilled over to horse racing. We have learned that the prized athletes of the horseracing world are permitted to use anabolic steroids. And most of them do.

The therapeutic use of four steroids, stanozolol (Winstrol), boldenone (Equipoise), nandrolone (Deca Durabolin) and testosterone, are legal in 28 of the 38 states that sanction horseracing. Most importantly for Big Brown, anabolic steroids for racehorses are legal in the three states where the Triple Crown races are run.

Big Brown’s performance-enhancing drug of choice was Winstrol (stanozolol). Big Brown’s trainer Richard Dutrow disclosed that the horse was administered Winstrol every month on the 15th. The steroids were part of a regimen that led to dominating victories in the first two legs of the Triple Crown – the Kentucky Derby and the Preakness.

For some inexplicable reason, Dutrow decided to stop the Winstrol injections in May. Why would Dutrow alter a winning formula for no apparent reason? Maybe he wanted to prove that Big Brown could win without steroids.

Maybe Big Brown doesn’t need steroids but didn’t Dutrow know that exogenous steroid administration suppresses the natural production of hormones? The sudden cessation of anabolic steroids would leave a less than optimal hormonal environment. This is a well known phenomena among (human) bodybuilders who use steroids.

Big Brown ultimately did not win the Belmont Stakes failing to take the Triple Crown; not only did Big Brown not win, he came in dead last. Was it due to the discontinuation of anabolic steroid treatment?

At least one veterinarian describes what sounds very much like to ”horse-equivalent” of what bodybuilders refer to as the “post cycle crash” and “anabolic steroid induced hypogonadism” (ASIH). According to Richard Alker, a veterinarian at the Panama City Animal Hospital and Equine Center, stopping the Winstrol caused problems (”Local vet: Lack of steroids may have been factor for Big Brown,” June 10):

“They took him off of steroids and that caused the problem,” Alker said. “If you get a horse used to those for their recovery, the benefits that provides for muscles and the things that steroids do for them, and you take it off of it there is a letdown.

“And even though the horse wasn’t on an abusive dose of steroids, it could have still caused an effect that was certainly detrimental to them.”

Alker said there’s typically a six- to eight-week letdown time frame after a horse is taken off steroids. Saturday’s race was seven-and-a-half weeks since Big Brown’s last injection on April 15.

“If it had been on a year, then off for six, seven months, his body would have been used to not having them,” Alker said. “But because he quit them in that time frame there’s this kind of letdown then, I think, that’s certainly possible it was a mistake.”

It sounds like Big Brown could have benefitted from “post cycle therapy” (PCT)! After his loss at the Belmont Stakes, Big Brown was started on another cycle of Winstrol. Since Dutrow has no scruples about resuming steroids, this, of course, begs the question, ‘why didn’t they just wait until after the Belmont Stakes before cycling off steroids?’

You would think the steroid administration wouldn’t be so arbitrary with a $50 million racehorse! I couldn’t imagine a professional bodybuilder winning contests all year arbitrarily deciding to stop using anabolic steroids eight weeks prior to the Mr. Olympia, the sports’ biggest payday. And there was significantly more at stake for many, many people in Big Brown’s case.