The Unwritten Rules of Baseball Need to be Erased

The Unwritten Rules of Baseball Need to be Erased 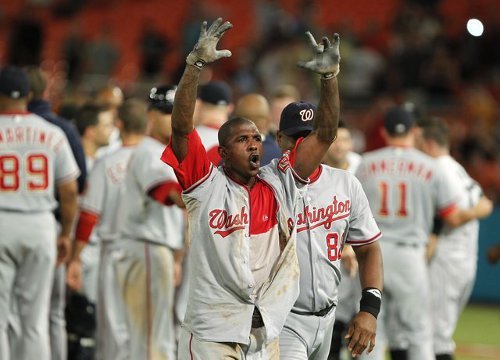 Alright, Nyjer Morgan is a dumbass douche bag.  We get it.  He’s brash, he’s young, he doesn’t see the big picture and he’s a pain in the ass.  However, when a fight ensued at a Nationals/Marlins game centering around Morgan, I had questions.

Actually, one question specifically.  What unwritten rule of baseball did Morgan break that got the Marlins pitcher throwing behind him?  It only took five minutes listening to the radio to find out.

He was stealing bases. Oh no. Henny Penny, the sky is falling!  Whatever shall we do?!

Yeah, the Marlins were kicking the shit out of the Nationals, Morgan stole second and third, and the Marlins were offended.  The Marlins.  A team that has bought two World Series wins since 1997.  The same Marlins team that forced Miami to build them a new stadium.

I Love Getting My Information From Wes Helms

If you don’t know who Wes Helms is, you shouldn’t.  He’s a worthless pile of crap that the Braves shipped out of town years ago.  Now he’s underachieving for the Marlins, but when the Nyjer Morgan “starts a fight” then Helms suddenly becomes a baseball expert.

“There’s nothing good I can say about someone who doesn’t play the game the right way and doesn’t respect the integrity of the game.  We had to show we weren’t going to put up with how he was treating us.”

Besides the fact that this is your typical “Florida Marlin bitch attitude,” I just don’t understand the premise.  Apparently, the unwritten rule states that you can’t just go around stealing bases when you’re getting killed.

I guess you need base-runners, but the team that already has their foot up your ass can be massively offended if you try to come back on them.  Damn those competitive athletes!

Wes Helms — you’re a douche bag of the highest order.  Crawl into a minor league hole and die already!

Competing and trying to come back on a team that is beating you by 10 runs is a good thing.

Baseball, if you want to keep getting your ass kicked in the ratings by the NFL and the NBA then keep letting s#*@ like this go on.  You’ve condoned this “unwritten rule” by suspending Morgan, but not suspending Marlins manager Edwin Rodriguez. You know he green-lighted the “plunking” and he, above all others, is responsible for letting this mess go on.

Let’s see how long it takes before this “unwritten rule” ruins an important game like, I don’t know, one in the World Series.  Just imagine the scenario where a team is trying to come back because, well, it’s the World Series, and the dominating team gets offended.

“How dare you try to come back and preserve your chance at a title!”  Mayhem ensues.  Players get suspended for WORLD SERIES GAMES.  The competition is ruined, and the winner deserves an asterisk because of the carnage created by the “unwritten rules of baseball.”

If you can’t see it coming then you’ve lost your mind.  If you agree with the Marlins you’re crazy, and if you’re Edwin Rodriguez you’re still the debil. Nyjer Morgan: I hate him too, but that’s another rant!