The Texas Rangers punched their first ticket to the World Series on Friday night by defeating the Yankees and completing only their second playoff series win in team history.

The San Francisco Giants took out the Phillies in six games to reach their first World Series since 2002.  It’s hard to think that teams from Dallas and San Francisco are small-market, but they are.

The Texas Rangers have been irrelevant since their inception.  In fact, the only good thing that ever happened to them was Nolan Ryan.  They had Juan Gonzalez and he did nothing for them in the playoffs.  They had Pudge Rodriguez in his prime and couldn’t do a thing with him.

Now the Rangers are poised to take home a title against the Giants.  The Reds won the NL Central.  The Rays won the AL East.  The Rockies made a move for the NL West again. Just look at what’s happening to teams with big payrolls.  This can’t be a coincidence. 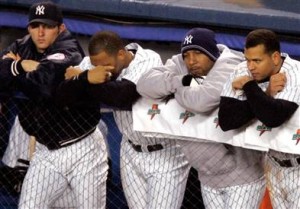 …have a payroll of about forty gagillion dollars.  Actually, many times their infield makes more than the whole payroll of their opponent. However, the Yankees couldn’t even win their division this year and they’ve only won one World Series since 2000. Given the amount of money they spend you’d think that they’d be able to pull out more titles in a shorter period of time.  It’s actually kinda embarrassing.

If you’re a Yankees fan you’re very happy with the 2009 championship, but it was long overdue and now you’ve just lost a series to the Rangers.  The Rangers of all teams.

And you know what?  You were screwed anyway.  You let the Rangers get in front of you and prevent you from winning the series in six.  You had to win it in six because, if you didn’t, they had Cliff Lee to pitch game seven.

Cliff Lee was the guy you couldn’t make a deal for earlier in the year.  They picked up one good pitcher and sunk your whole season.  What’s more, they didn’t have to use him on you twice.  That’s how far you fell this year.

The Cardinals and Cubs 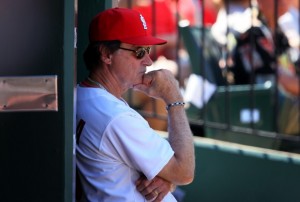 The Cardinals basically handed the NL Central to the Reds this season.  In fact, the Reds got swept by the Cardinals in August and ended up down a game in the division.  A couple weeks later they led the division by eight games because the Cards couldn’t stop losing to bad teams.

Tony LaRussa has pretty much lost the team, and the speculation about whether he would return was intense because everybody knew he did a crappy job this year. The St. Louis Cardinals ARE big-market baseball.  In St. Louis it’s a Cardinals town and that’s it.  Nobody cares about the Rams.  It’s the Cards all day and all night.

They have the resources to put a team together.  In fact, they had a team put together.  They carry Albert Pujols, Matt Holliday, Yadier Molina, Chris Carpenter, and Adam Wainwright.

The Cardinals lineup looks much more fierce than the Reds lineup, but the Reds produce runs, play small ball, and have a couple big boppers.  All the Cards know how to do is bop.  In fact, that’s just like Yankees.

The Cubs aren’t any better.  They keep paying for players and filling up Wrigley Field, but they never get any better (just like a Slushie Dog.)  They’re the big brother in Chicago, but the White Sox won a World Series in 2005. If I’m not mistaken, the Cubs haven’t even been since 1945.  To illustrate how long ago that was, my mom was a newborn.

How The West Was Won 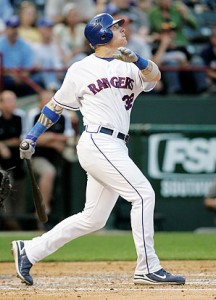 Out west the Rangers owned the AL West all season.  The Angels, with their huge payroll, couldn’t even touch them.  The A’s, with their “genius” Billy Beane, couldn’t get out of their own way.

The Dodgers stunk up the joint all season, and then they had to watch Joe Torre hit the door (as if he did anything anyway).  They made a move for Manny Ramirez, paid him a ton of money, watched him get suspended for 50 games, and then gave him away. They tried to copy the Yankees and it didn’t work.  Instead, they were getting pounded by the Rockies, Padres, and Giants.

You can’t tell me that the AL West wasn’t pathetic outside of the Rangers this year, and you can’t deny that the Dodgers should be ashamed of themselves.They added themselves to the overpowered/overpriced club with the Angels by having everything you could ever want and doing nothing with it.

Can you even remember the Angels being in contention at all?  I can’t. The West was won just like the Central and East — with small ball and a couple big shots.

What Does This Equal? 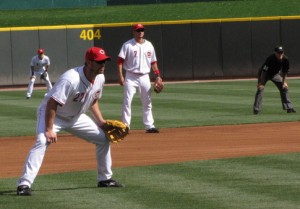 A renaissance in small-market baseball is here to stay.  The Reds had the most productive offense in baseball this year, but you probably don’t realize they carry a really old Scott Rolen and Orlando Cabrera, a kid we call “Double A Jay” (Jay Bruce) who hit the walk-off homer that won them the division, and Joey Votto (who only made $500,000 this year).

That’s the team that held on over the Cardinals to win the Central.  Oh, and did I mention they also have three really young pitchers that they brought up through their farm system?  That’s small market baseball at its best — using its farm system to beat the big boys.

The Rockies have some pitcher named Ubaldo Jimenez who was an early MVP candidate.  The Rangers have Josh Hamilton, Michael Young, Ian Kinsler, CJ Wilson, and Cliff Lee.  Basically, their team is a quilt that equals a World Series berth.

We’ll still have to watch the Yankees and Red Sox duke it out for the AL East just because their only competition there is the Rays, but at least we can sleep at night knowing that small market teams can lay it to them when the lights are on.  I think we can count on a small market team making noise every postseason while the big boys wonder what happened.

Next year it could be anybody in the World Series, but if you’re a betting man I’d put my money on somebody small and take the good odds.  The big money just doesn’t win important baseball games anymore.