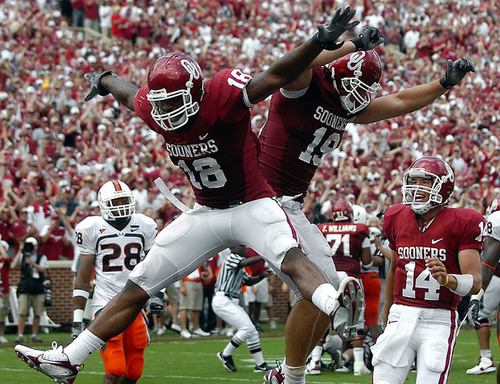 Aaaahhhhhh, Saturday is almost here and that means one thing this time of year…College Football!

Based on the picture I bet you’re assuming that OU vs. The U is my marquee matchup this week…you would be right.  I’ll get to them later, though, because we have alot of other intriguing games going on this week.

Michigan needs to stay on a roll and Michigan State needs to get it together at Michigan’s expense.

The tale of the tape here will lay with Tate Forcier.  If he goes and he’s at least 75%, the Michigan wins.  He’s inching up into the long list Heisman candidate race and I think he can really turn things up for the Wolverines if he can stay healthy.  It seems, however, that will be a problem.  Tate, please take a lesson from Randall Cunningham, Michael Vick, and Donovan McNabb…you get too physical and you’re going to miss alot of practice and maybe even some games that your team can’t afford for you to miss.  If Michigan is on a comeback then Forcier has to be leading the comeback.  I honestly think that the kids on this team believe that he is the messiah on this team and he isn’t 100% then they’re screwed.  That kind of belief will sink just about anyone who plays them…assuming he goes.  I’m taking Michigan by a couple touchdowns.

LSU’s travelling to Athens on a roll and holding a high early season ranking.  As we’ve seen this season, most of the teams that get in the Top 10 lose just about as soon as they get there.  That’s a problem for LSU.  A further problem would be that Les Miles is there coach.

Now, I’m not saying he’s a bad coach (he’s won a national title after all) but I am saying that he’s not the wisest coach.  He makes decisions that, sometimes, make me want to pull my hair out and I could care less about LSU, but the things he does just drive you crazy.  I cannot imagine a worse person to be in an environment like Sanford Stadium, coaching a team that just ascended to #4 in the country and is hoping not to follow the prevailing trend this season [getting a high ranking and then immediately screwing it up by losing a game you’re supposed to win.]

On the other hand I really trust Mark Richt, but I think there’s a talent issue at Georgia.  He seems to be stumbling on alot of kids who are, shall we say, not reliable.  They look great athletically, but they can’t pull the team through when it needs it most.  I’m afraid this trend will continue to haunt UGA because I just don’t see any way that they can beat LSU.  LSU is more talented and more hungry.  They don’t look like the Ole Miss team that squandered their whole season on South Carolina!  I’ll take LSU by 6.

Last week I went on and on about how Penn State was going to put their foot up Iowa’s…well, you know and they go and lose.  That sucked.  However, I also know that Joe Pa is an angry old man and he won’t let his team lose two in a row that they should win.  Just imagine his raspy old voice:

“Men, if you don’t go out there and kill Illinois my Great-Great Nephew Vito’s gonna come over and brake ya legs!”

I’m keeping my faith in the Nittany Lions….Penn State by 2 touchdowns.

Can that be the playbill for this one?  Steve Sarkisian is on the brink of doing more in his first year at Washington than Charlie Weis ever has done at Notre Dame.  Charlie needs to get it in gear or there are going to be boosters lining up cash to make his buyout, because Notre Dame fans don’t do well with losing.

{On a related note:  Don’t you wish you still had Ty Willingham you Golden Domers?  Don’t you?  Don’t lie and act like you totally think hiring Weis was a mistake…because it was.  He can single-handedly tank the second winningest program in the history of College Football in the next couple of years if something doesn’t change soon.}

I don’t believe in Charlie Weis and probably never will.  The Huskies by a bundle…

Florida State needs to make up its freaking mind!  Either they suck, or they’re great.  Pick one, because, really, Boston College stinks.  They can’t do anything, Matt Ryan was their savior and now he’s a star in the NFL and they have nothing to fall back on.

Florida State has its own host of problems and they start at the top.  Jimbo  Fisher is contracted to take over for Bobby Bowden and you have to wonder if he’s even qualified to be the head coach anywhere, much less at a floundering Florida State.  They can’t get talent like they used to, he’s already there, and recruiting isn’t improving so how would he fix things after Bobby goes?  I think they’re screwed and they know it.  If they know what’s good for them they’ll get Bobby to retire the way the Braves did, order his statue, buyout Jimbo Fisher, and pay Jim Leavitt a King’s ransom to come up from South Florida.  That ain’t gonna happen, but they’re still better than BC.  The Noles by a couple.

Gene Chizik has alot to prove (remember that they ran out a dude who had a perfect season not too long ago for this guy) and Lane Kiffin needs to shut up and start winning.  Here’s the problem.  Gene Chizik, a guy who shouldn’t have really gotten the job at Auburn to begin with, has the Tigers rolling at 4-0 and he looks like a genius.  Meanwhile, Lane Kiffin looks like a dumbass and the best player on his team (Eric Berry) is a Safety.  That doesn’t bode well for anyone.  Lane needs to shut his mouth and turn around the talent on his team fast.  We can talk about his stellar recruiting all day long, but if it doesn’t produce results and it means the best player on your team is a Safety…..A SAFETY!!!!!!!! Then he just needs to shut up and take his butt-kicking like a man.  Auburn by a ton.

Alright, USC ain’t #7 and Cal ain’t #24.  The rankings are all jacked up and Cal’s blowout loss to Oregon last week proves it.  Oregon suspended its best player for punching someone out and they still destroyed Cal who was in the Top 10.  This makes no sense.  In reality, USC is about 10 or 11 and Cal is about 15 or 16.  So, these teams are actually evenly matched.

{On a side note, I feel bad about Stefon Johnson getting hurt like that, but it does not in any way sway my pick.  I have to be strong!}

If you’re going to tell me for one second that either one of these teams is going to contend for anything besides the Pac-10 title then you’ve totally lost me.  They’re duking it out to see who can win this conference, and since everyone else isn’t that great they might as well settle it now.

With Barkley (I know, I get confused every time I hear this kid’s name because I think about Basketball…don’t you?) in the line up the Trojans probably can’t be beat, but then again Cal got walloped by Oregon, so who freakin knows anything about this game.  I say it gets tight late and Barkley shows his maturity and leads the Trojans down the length of the field to win the game.  USC by a nose…

Where the hell did Houston come from?  Did Andre Ware re-enroll in school just to give the Cougars one more chance in the spotlight? Is Mike Price still at UTEP?  Does anybody care?  I’m not picking this game, I just can’t imagine how Houston got to #12…didn’t they disband the football team or something, because we haven’t heard from them SINCE Andre Ware.  I guess this is a sign that this season truly is screwed up because there is no way on earth that Houston would be good in ANY other season.  Next thing you know they’ll be #1 in the polls and losing to someone like SMU the next week.

Alright, Landry Jones is starting for Sam Bradford, Jacory Harris must feel humiliated after the loss against Virginia Tech (which he took responsibility for) and now these two teams collide in a must-win game for both.

We can have every pundit in the land talk about how the gameplan doesn’t change because Landry Jones is a pocket passer blah, blah, blah blah blah, but until we mention the fact that Miami is probably really pissed that they got embarrassed by Virginia Tech we aren’t putting out the whole story.

Yes, Jones set a Freshman record with 6 TD passes last week…yippee!  He wasn’t playing an angry Miami team.  Do you think for one second that Jacory Harris has any intentions on losing again this year?  NO!  If I’m any judge of character he already told his team that they are not losing to OU, and they won’t.  Landry Jones isn’t the man, he’s “the man who backs up the man”…..Jacory Harris is THE MAN.  The Canes going away……

Let’s Talk About The Polls

Alright, the polls are jacked up.  The Top 11 in both polls are pretty much the same…Florida, Texas, Alabama, LSU, Boise State, VT, USC, OU, OSU, Cincinnati and TCU.  After that it’s like a hodgepodge of teams thrown all over the place.  We need to get a hold on these polls because clearly a secretary who’s picking teams based on the color of their uniforms is choosing some of these.

I bet you didn’t realize that there were that many disparities in the polls.  Well guess what, this stuff is effed up.  Can we just discontinue the Coaches Poll and get it over with.  They’re not helping anybody by doing it half ass…..please, stop the coaches!  NOW!

Last but not least, a new segment:

The Upset Special of the Week

Vanderbilt plays Ole Miss this Saturday and Vanderbilt is going to expose Ole Miss and expose how bad the ranking system is.  Ole Miss should have never been up at #4.  NEVER.  Just watch….Ole Miss is up the creek without a paddle.  I trusted in them and I should’ve known better….it’s freaking Ole Miss!