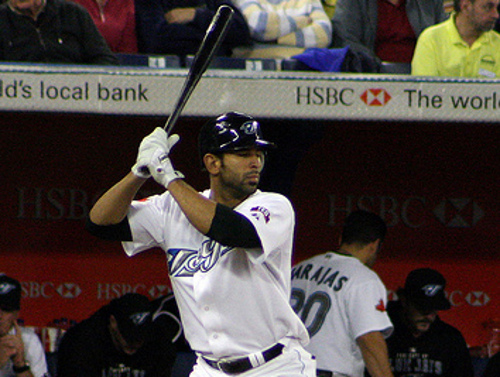 The Toronto Blue Jays have few bright spots in their season.  They’re barely above .500.  They’re in fourth place in the AL East.  No one takes them seriously, and they’re in the place where everyone thinks Roger Clemens started using steroids.

So, when Jose Bautista comes along and hits 50 home runs it’s kind of a big deal, but in today’s game everyone is going to be skeptical.  Why?  The whole “I bet he’s juicing” thing.

That’s the beauty of the game.  It’s so persnickety, so quirky, as if it has its own personality.  It’s as if baseball allows people and teams and to be great allows other to flounder.

Why are so many of you suspicious of Jose Bautista?  Isn’t he showing us what a great game baseball is?  Oh, you want proof.  Ok, I’ll give you proof that doesn’t come from a blood or urine test.

Stop Comparing Him To Brady Anderson 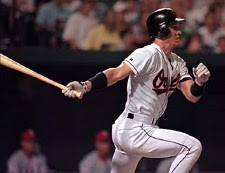 Everyone thought the same thing — steroids.  Brady was a slender guy so he bulked up by juicing and cracked a bunch of homers.  Let’s say he did that because there was no testing program in baseball at the time.  Let’s say he was juicing.

There is no way for Bautista to suddenly “get bigger” without getting caught by the league’s testing program.  There was no testing program in 1996, and that’s assuming Brady was using in 1996.

The more I think about it.  Brady wasn’t using anything.  He made some changes and got hot.  Then, like that, it was gone, but I can understand that the possibility is there for Brady because he played in unfettered times where anybody did anything without fear. Jose Bautista is not Brady Anderson. 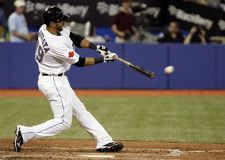 Bautista made changes to his swing and manner at the plate that have made all the difference.  In baseball a fraction of an inch is the difference between grounding out or flying out and hitting the ball 450 feet.  Strength has very little to do with power.

Also, he’s started crouching at the plate and leaning on his back foot.  His bat angle is almost flat now as he waits for the pitch.  This gives him a lot less ground to cover when he’s swinging for the fences.

He even keeps his hands higher and off his body so he has leverage on the bat.  Wait a minute, don’t you think of power when you think of leverage?

He’s also swinging earlier and getting a jump on pitches that, in the past, struck him out.  Prior to this season he had 59 career home runs in 6 seasons with 434 strikeouts.

He was striking out and rarely producing.  Pitchers had no fear of pitching to him because he was getting to the ball late and grounding out or flying out more often than not.

A guy starts using more efficient mechanics at the plate and we’re surprised when he’s spraying the ball all over the place?  We shouldn’t be.  We should just marvel at the game.

Don’t Blame The Skydome Either

Rogers Centre, the Skydome, whatever you want to call it.  Everyone says it’s a hitter-friendly park.  Let’s say that it is and everything just flies out of there like Big Macs at McDonald’s.

The Blue Jays do lead baseball in homers, but the Rockies aren’t anywhere close.  I thought I could hit a ball out of Coors Field!  Oh right, you still have to be good enough to hit the ball out.

The Blue Jays haven’t been anywhere near the top 5 in homers in the past decade.  If Skydome was the culprit then we’d see big home run numbers every year from the birds.  We’d be able to track a trend.

The fact remains that Bautista made a change in his mechanics, found his “sweet spot,” and made his teammates better.  Is that so wrong?  Maybe he’s leader Toronto needs to make a playoff push next season so everyone on the team is playing up to his level.

Hitting a baseball is harder than some people realize.  That’s why I spent about 275 words talking about his mechanics.  If it was so simple we’d all be playing in a “hitter friendly” park and making millions.

Give the Man His Due 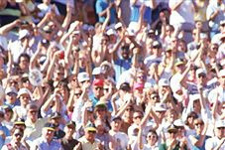 Jose Bautista put in the necessary work to hit over 50 home runs this season, and he’s managed to keep his team above .500.  I’d think this is worthy of a couple MVP votes.

I’m not saying that Bautista is the runaway MVP or that he’s more valuable than someone like Josh Hamilton or Miguel Cabrera.  All I’m saying is commend the man for having a great season.

Bautista isn’t some big ox who cranks homers.  He’s a scrawny sub-six-footer who got his swing right.  Like I said, strength does not equal power.  If it did Prince Fielder would already have a million career homers.  Your swing matters.

You never know.  He might fall back into obscurity next year and only hit 50 home runs the rest of his career, but this year belongs to Jose Bautista.  We should give him a chance to be hung on the mantle with numbers like “61 in ’61″ and “52 in ’77.”

Can I get an amen for Jose Bautista?  The man made the Blue Jays — the BLUE JAYS! — relevant with his incredible play.  I think that deserves a standing ovation, not suspicion.